Emit held his palm against his head.

Emit: Remind me again how you managed to convince me to give you my jet pack? 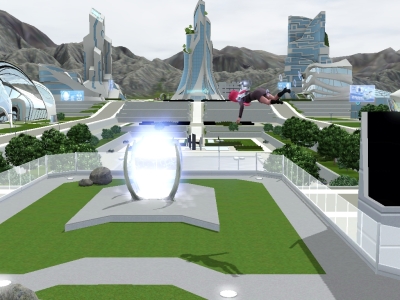 Athena: I’m having so much fun! What should I do now?
Emit: Why don’t you go talk to some plumbots?
Athena: You mean robots? Yes! That would be so cool! Where can I go do that?
Emit: I’ll call a hover-taxi to take you to the Emporium.

That was how Athena found herself talking to a robot…err plumbot. She couldn’t remember his…it’s…name for the life of her. It wasn’t even a real name, just some random letters and numbers.

I wanted to be the first one to build a serving robot! No fair! Wait, maybe I am…who invented these things? J-whatever informed Athena that the inscription on the legend statue in the park indeed belonged to a man. Guess I’m going to have to be the one to build the greatest robot ever!

J looked at her puzzled.

J would have raised his mechanical brow if he had one.

J: You’re another one of Emit’s time traveling buddies aren’t you?  I’ve already paged him, a taxi is coming soon.
Athena: No way! I can’t go back. I’m not ready to go home!

Exhaustion was too much for the pink haired girl though. Once back at the home base, Athena was met with Emit. 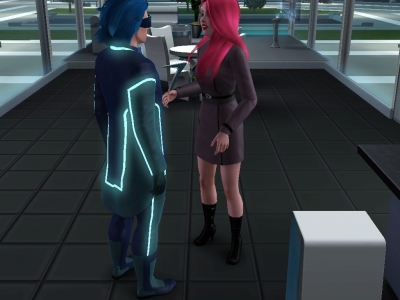 Emit: How were the plumbots?
Athena: Great, I’m just upset I didn’t invent them!
Emit: Are you ready to go back home?
Athena: No way, I mean it hasn’t even been a day really -yawn- All I got to see was some robots and a jet pack -yawn-
Emit: You can’t go through the portal this tired. One night here and then you go back. I’m serious this time. Now come on, I’ll show you to a guest room.

Athena followed him to a spacious room with its own bathroom attached. It reminded her of a futuristic hotel room. Once Emit left, she sprawled onto the queen size bed in front of her. A capsule roof closed over the top of the bed and Athena began to panic. He’s trying to kill me! -Dream Sequence Initiated, What kind of dream would you like to have, an adventure, a romance or a horror?- She looked around her for a voice, realizing it was coming from the bed itself.

Athena awoke to the sound of an alarm. She quickly changed back into the clothes she arrived in and tried to find the kitchen in the spacious building. On her way though, she found an orb that looked peculiar. What is this? She picked it up and poked it. After a minute a screen arose. 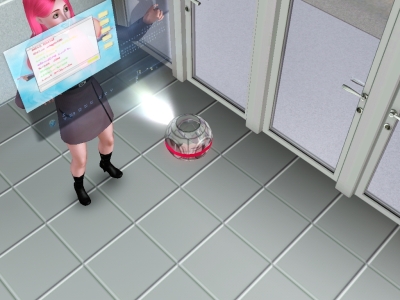 She figured it was a high-tech computer. She didn’t know how to work it though and another voice began to speak. -Welcome. Would you like to play a game, browse eligible bachelors online, search for people or do something else?-
Athena: I’ll search for people.

She was really trying to dig up some information on Emit and the results were endless. Apparently he was a Time Keeper which made sense. She kept on reading but it stopped making sense to her after awhile.

Athena: Hmmm, who else can I look for? Oh, I know! I wonder who my kids’ kids are!

A quick search for the surname Gray gave her a single result. “Megan Gray.” It brought her to a social media page. A futuristic version of Facebook probably. This Megan girl was friends with a few other Grays. With some investigating Athena found that they were staying together. I love future technology, finding their address was so easy! She was looking for a phone number when she was interrupted. 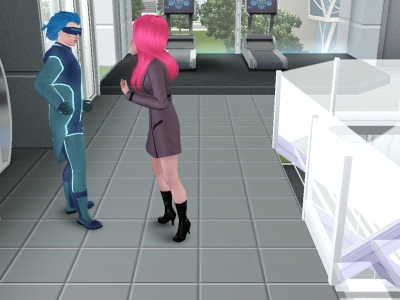 Emit: I see you’re ready to go.
Athena: I just found out I may have some family here! I can’t leave just yet!
Emit: How do you know that they’re really your family and not some people with the same last name?
Athena: Well this Megan girl has my hair color.
Emit: That really doesn’t mean anything.
Athena: Yes it does!
Emit: Your time here is up. I let you stay much longer than our agreement. You have to go back before anything is changed.
Athena: Can’t I fix it by going back in time prior to that date?
Emit: It really doesn’t work that way. I’m sorry.
Athena: But–
Emit: Lets go!

Emit began to shove Athena towards the door despite her protests. I don’t want to leave…if what Emit says is true, I can change the future. I can make it better. I can make sure Lunar Lakes gets better. I’ll leave now, but it doesn’t mean I won’t come back.

Athena was ushered into the portal and back to her small house in Lunar Lakes.