I’m starting to shift back into Noah’s point of view, though not fully in this chapter. It is his generation after all. Also, please let me know if the storyline is moving too fast, if I drew it out, the generation would be much longer than thirty chapters! 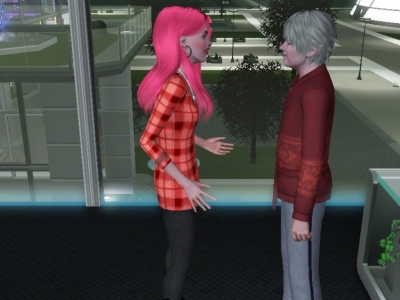 “Mason is back…what are we supposed to do? Our son, the one who is supposed to keep the Gray family going can’t even remember who we are. He doesn’t know anything about his family. Its so important for the future generations. Noah is a part of our family and we can’t give up because of Mason.”

“I understand that fully, Sweetheart. Our son’s will is much stronger than Mason’s. The whole family is here to back him up and we can’t stop showing him how much we care just because he doesn’t remember us. We just have to trigger his memory somehow,” Levi answered.

“I bet you that Corrine would be able to jog his memory. Shes so important to him, but the only thing standing in the way is Puzzle…Farina, whatever you want to call her. I don’t even understand how Caleb’s imaginary friend is real, but I hope she does the right thing and helps Noah,” Athena said.

“Right now, we can’t leave the future as it is. Theres no way we could leave Oasis Landing and hunt Corrine down in Lucky Palms. She’d never believe us. It took getting to the future to convince the kids and even then, they weren’t so pleased to be going through a time portal. We have to hold out on the Corrine thing for now. Our top priority should be finding Emit, he’s supposed to be watching the future. With him gone, Mason was able to sneak his way in through all the chaos.”

“Finding Emit….its going to be a lot harder than it looks. This is where you and I first met, remember? In this very building. Emit allowed me to come to his home base where you were waiting to save the future. I can’t believe we let it get this far. Its all my fault. I shouldn’t have even become involved with Mason…” 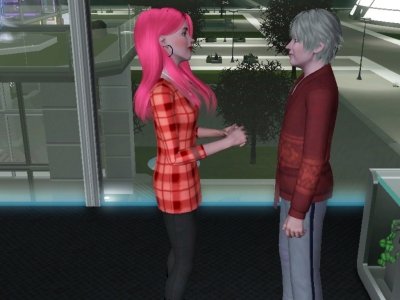 “You know thats not true. None of this is your fault. Mason…he was never like this. Losing our parents threw him overboard…time traveling under Emit was supposed to help him, but he abused his power. Mason has always been good at conniving people and even Emit fell for his nice guy tricks. Without Mason trying to screw up the timeline….I would never have met you. Caleb wouldn’t be with us…”

“Its always about Caleb with you, isn’t it?” She smiled and kissed Levi’s cheek. “You’re a wonderful father and if Mason reveals himself to Caleb…I don’t think it’ll matter to him at all. You’re the one who’s been here his entire life. Not that loser.” 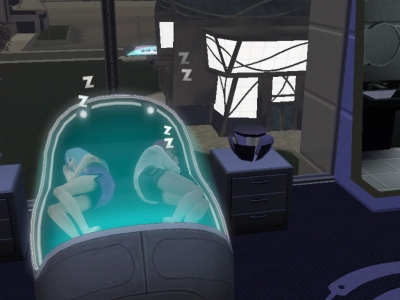 It had been a few days and Puzzle still hadn’t told Noah the truth. Athena suggested that the Gray family back off for awhile as not to shock Noah too much. This all with the idea in mind that telling Noah the truth was Puzzle’s intention. She had become too comfortable with the idea of being with Noah. It wasn’t like the thought hadn’t occurred to her, because it had. She felt immensely guilty for lying, especially after the Gray family had been so nice to her in the past. But…she felt complete near Noah and she never wanted to give the feeling up. 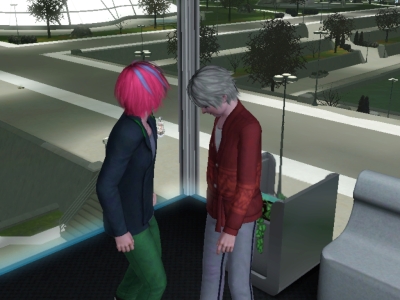 Levi had tried to jog Noah’s memory, but it was hard talking to him as if he wasn’t his son.

“You know, I see you as a doctor. Saving people could be your vocation. I didn’t know my real father, but I had a father figure who was a doctor. He was constantly playing chess with my son and dabbling in the chemistry skill…”

“Chess is fun, but not if you don’t have anyone to play with. I always beat Farina, she isn’t too good at it. I honestly don’t see myself as a doctor, I want to go back to my old job of bot building.”

Levi frowned, what had Farina been drilling into his son’s head? 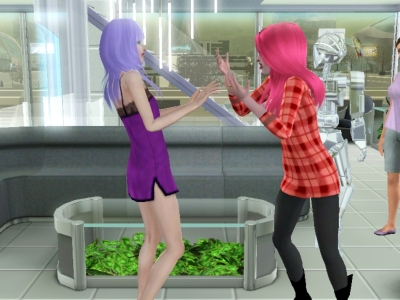 “Why haven’t you told Noah the truth yet? I’ve given you the benefit of the doubt. I thought you might have needed time to formulate your thoughts and words…but its been days and you have avoided the topic altogether. I wouldn’t have minded it so much if you haven’t been sneaking around kissing and sleeping in the same bed with my son. Don’t you have some class? I don’t really care who you are. I understand that you’ve helped my children grow up, and I’m really grateful for that. But right now…you have the whole Gray family depending on you to get our child and brother back. You better tell him the truth and soon because you know that you’re the only one who can do it,” Athena spat before walking off.

“Noah doesn’t even want to talk to me.” Daisy frowned.

“He thinks I’m the janitor because I keep picking up the trash I see lying around,” Kayden grumbled. “Even though Daisy told him I was her twin.”

Caleb began to laugh. “You’re an idiot Kayden. Maybe you can get him to pity you and then become his best friend and he’ll remember your brotherly bond.”

“Lets be serious for a minute.” Athena cut in. “Puzzle isn’t budging. Shes way too comfortable with Noah right now. The only person who can do anything about it is you Caleb. You know her better than anyone else.”

Caleb sighed. “You’re right…leave it up to me.“ 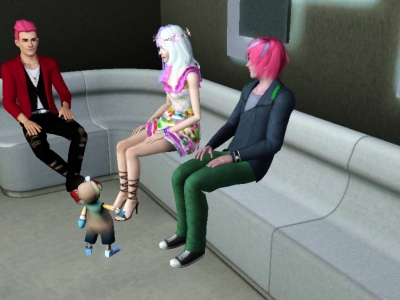 When Caleb had found her, she was seated near Noah. They were laughing over some kind of inside joke. Caleb casually strode over and placed the doll version of Puzzle on the floor. Whether it made Puzzle feel bad or jog Noah’s memory, it’d prove useful.

“Yes…as a matter of fact I do. I’ve learned to hold on to things that I care about. My doll, Puzzle, is one of the greatest things to happen to me. Growing up, she’d always tell me the truth and confide in me. So…if you want to make fun of me for having a friend, go ahead.”

“You…you really mean that?” Puzzle/Farina asked. She had a hand on her heart.

Noah grabbed her other hand and smiled. “I guess I can understand that. It doesn’t matter the shape or size of the companion as long as you have someone you can trust. Living or not.”

“Exactly. Puzzle is like family to me. Thats why I wish she’d tell the truth. Farina…right? You’re a good person deep down, I know you’ll do the right thing to protect my brother.”

“You’re keeping my family apart, the exact opposite of your purpose. You’re choosing favorites and alienating!” Caleb growled, the anger getting the best of him. 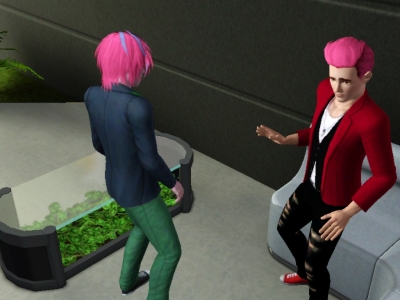 “Can you just lay off of her. She isn’t doing anything to you…Farina is beautiful and incredible. She’d never do anything to hurt anyone,” Noah shouted back. 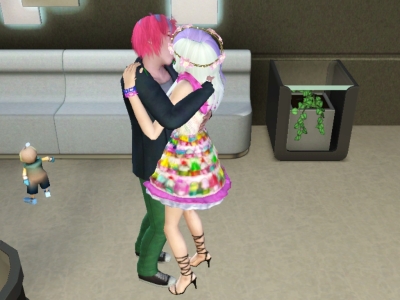 After Caleb had stormed off, Noah placed a passionate kiss on Farina. Unlike with their first kiss (that Noah could remember), there weren’t any sparks. He didn’t feel anything at all. The same girl from his night in the dream pod flashed through his mind. When he pulled away from Farina, he could drop this girl’s image from his mind. She said her name was Corrine. He shook his head and apologized to Farina, telling her he was tired and wanted to lie down. 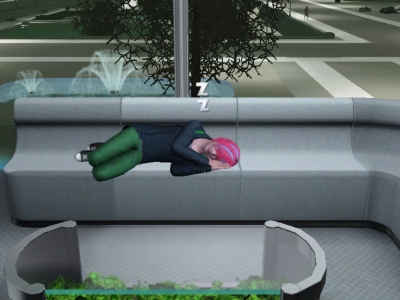 No matter how hard he tried, he couldn’t stop replaying the only moment of Corrine he had stored in his memory. Who was she? Why was she so important to him? He felt terribly guilty about his last encounter with Farina. Finally, he had fallen asleep. 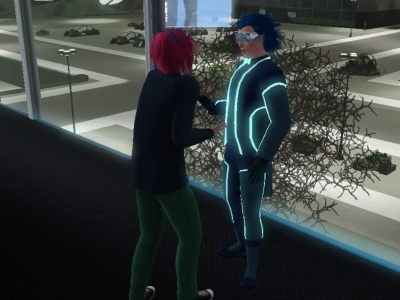 “Woah…are you the famous time traveler? Theres a statue of you in legacy park!” Noah said excitedly. He was aware he was dreaming. It felt like lucid dreaming to him because he could control his actions.

“Yes…my name is Emit Relevart. I was waiting for you to fall asleep out of that dream pod to come and talk to you. I don’t have much time because this takes a lot of energy, so listen carefully to what I’m about to say.” He watched Noah nod. “I don’t know if you’ve heard, but the people of Oasis Landing think that I’ve abandoned them…I haven’t. I’ve been locked out of Oasis Landing by somebody you’re very familiar with. Mason Moon.”

“That guy is a jerk in every sense of the word,” Noah grumbled.

“He has been trying to change Oasis Landing for years…the dystopian society is his doing. He’s changed the future completely. Your wife…and I use that term loosely….Farina, isn’t the only family you have. You are one of four children, the middle child. You’re older brother, Caleb Gray has been your role model for most of your life. Your younger siblings, Kayden and Daisy are twins and you’ve been watching over them protectively for awhile, especially Daisy your only sister. I understand you’ve met them here, but they aren’t just futuristic residents. They are your family. You can’t remember any of them. Your parents….Levi and Athena, are two of the most incredible people you will ever meet. They’ve been patient with your amnesia, but what they really want is their son back. They have fought so hard to get the family they have and right now, Mason is trying to squish it for his own personal gain.” Emit paused for questions.

“I have…a family? But…this is all a dream, and I want to hear that I have a family so my brain is filling it in with these five strangers.” Noah shook his head. “Nice try brain.”

“While this is a dream, I am not. I am the time keeper. I know how the future will end up and how the past has changed. If you choose to believe me is your decision, but I’ve given you the information I know. If you don’t believe me, the truth will become clear tomorrow. Farina is going to be the one to spill the information, this I promise. One more thing before you wake up, you can’t change the future from the future. Oasis Landing needs a lot of reconstruction and everything you do is going to be erased by Mason. Instead, you have to go back to Lucky Palms. Its entirely possible to change the future from there as long as your siblings keep Lunar Lakes afloat. If you have anymore questions….my daughters are there. You can ask them anything. Leia and Lorie. Sweet dreams Noah Gray.”