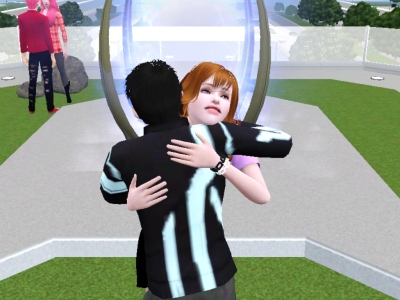 “You said it wasn’t a big deal,” Kayden sighed, irritated.

“Shut up. You know it is a big deal. I won’t be seeing you everyday anymore!”

“It didn’t seem to matter when you were off in Lucky Palms.”

“I love him, alright? He means everything to me. He doesn’t see the freak from Lunar Lakes. You know, thats what they call us everywhere now? The freaks of Lunar Lakes because of our government’s previous strict isolationist policies. Anyway, he doesn’t think I’m a freak. He loves me,” Daisy sighed contently.

“If he ever calls you that. So help me, I will kick his fucking ass,” Kayden growled.

Daisy laughed and wiped a tear from her eye. “K, I’m going to miss you. Take care of mom and dad. Don’t worry about me, I have my two pink hair body guards.” 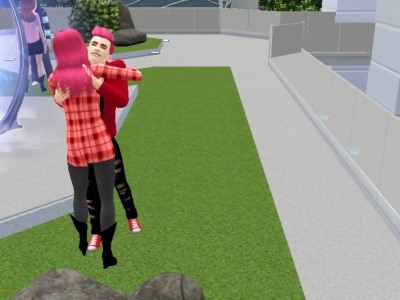 “I know. You better keep me updated on everything thats happening. Keep an eye on your siblings alright? You’re the older brother, so you have to take care of them alright?”

“Oh, and don’t let the fame get to your head.” She pinched his cheek. “You’re still my little boy.”

“You know that EP you released? You’ve got a bunch of people listening to you.”

“I’m no international pop star though.”

“Your real fans are the ones who like you now. The one’s who care about your music. Not those bandwagoners who love you once everybody else does.”

“Good lesson, mom. I’ll be sure to hate my future fans,” He grinned.

“Be good. I’m going to be at Daisy’s wedding. It’ll be soon. Trust me,” She smirked. 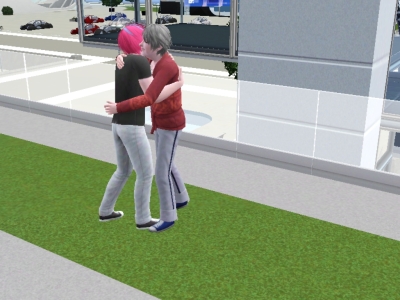 “Dad…”Noah frowned. It was bittersweet. He had just reconnected with his family and now they were leaving again.

He had said goodbye to Puzzle. She was gone forever. His father was right. If it was up to Noah, it wouldn’t be the last time he saw his father and therefore this wasn’t a goodbye. It would never be.
“There’s this girl that I’m absolutely crazy about. I can’t stop thinking about her. You’re the first one I’m telling.”

“Your mother already knows. Her and Emit have been planning weddings for days.”

“We haven’t known each other that long!” Noah blushed.

“Time doesn’t matter. You know when you’re in love. I fell in love with your mother the minute I laid eyes on her. I’m not kidding. I tried to make a move on her the same day, but she wasn’t having it. So, I just pretended like I was joking around. I stood back and let her live her life because I wanted nothing more than for her to be happy. But sometimes, you have to intervene before things get out of hand. Don’t let any other man intervene.”

“Thats what I tried to do with Corrine. But honestly…I haven’t thought about her as much as I think about this girl. I mean I got flushed when I met up with Corrine the other day, but it was because I was remembering the feeling I once had for her. I’m head over heels in love with this other girl though.”

“So you finally moved on from Corrine? Took you long enough.” He stuck his hand in his pocket and pulled out a slip of paper.

“What is this?” Noah asked.

“It’s lucky,” Levi smirked and began to head to the portal. “If I don’t leave now, your mother won’t and then all of these heartfelt goodbyes would be for nothing.”

Athena and Levi had said their goodbyes and left through the time portal. They had said that this was the last time that they’d be in Oasis Landing. Noah had a feeling that he’d be back soon though.  Emit had stopped Noah with one last bit of advice.
“Noah…my daughters?”
“What about them sir?”
“They’re safe, yes?”
“Yupp. I promise you that as long as I’m in Lucky Palms, your daughters will be safe. I vow to protect them.”
“This is why you’re going to make the best son-in-law,” Emit smirked.
“Hey!!” Noah blushed. He hadn’t even told her how he felt yet. It would be one of the first things he would do back in Lucky Palms though.  “You better be there!”
“You know I can’t leave Oasis Landing,” Emit frowned.
“Not even for a few hours? Forget about all of the wedding stuff. I know your daughters would like to see you, just once.”
“I can’t,” He sighed in frustration.
“I’m not covering for you. I don’t believe you can’t make an exception.”
“I can’t make an exception, not even for my two princesses. I have a timeline to protect, an evil time traveler to find and theres no way fun and games comes into this. You don’t have to make any excuses for me.”
“Mason is gone?”
“Of course he is. I created a monster.”
“What are you talking about?”
“Don’t worry about it. Just go.” Emit pushed him through the portal that Caleb and Daisy had already walked through. 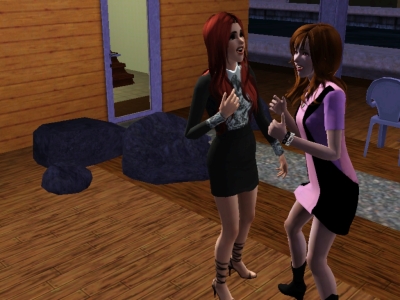 Lorie was ecstatic with the news of Noah’s return. She was excited to meet his siblings and even more excited to gossip with Daisy. It seems that they had met before at somebody’s party. Lorie was quite the party animal and so was Daisy’s boyfriend, which neither of the girls would spill on.
“You just have to meet him, ok?” Daisy smiled sweetly.
“Fine,” Noah grumbled which Caleb laughed in response to.
“Do you think we can stay here just for the night?”
A night turned into a few nights and a few nights into a couple of weeks. Lorie had moved her drafting table and laid a few sheets on the floor. Noah and Caleb camped out there. Daisy had slept on the couch in the living room, while the girls stayed in their shared bedroom. Things were cramped enough as it was, but at this point it was starting to feel like a cage. It was impossible to do anything in the house without tripping over another person’s stuff. Most of the time, Noah had spent his day outside of the house because he was starting to get a little claustrophobic. It was time that he used his father’s “lucky” paper and cashed it in. The winning lottery numbers had already happened in the future and Levi did some snooping. He swore it would be safe to the future’s timeline to use, which Noah had no other choice to comply with. 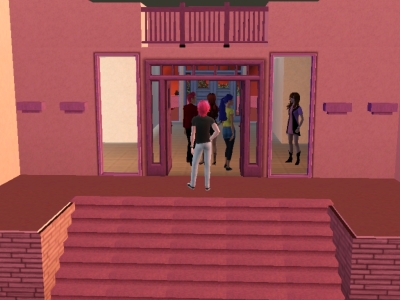 With the new found fortune, Noah perused the real estate market. He had found a cheap house that was practically bordering on mansion. There had been three bedrooms and a few, if not more bathrooms. There was a kitchen AND a dining room! The reason Noah was able to get it for such a steal was because it resembled some sort of superhero headquarters which the guy’s wife made him get rid of. Noah had spent the last few days rearranging furniture to get the last of the geek stuff out (though Leia would have loved it!) Now it was time to move them in.
“Where are we going?” Leia asked, rubbing her eyes. She had just woken up.
“Get dressed and follow me. All of you!” All he had to do was shout the last part. The rest had been in earshot.
“What is this?” Caleb asked once they had arrived in front of the massive building.
“Our new house.”
“What!? But how?” Lorie gasped.
“I came into some money recently. Thanks to dad.”
“It must be great having a rich father,” Lorie sighed dreamily.
“Who needs money when you have love though, right?” Daisy grinned.
Leia shot her a glance and walked inside the building. “We can’t all be that lucky.”
“I didn’t mean anything by that…”
“Its alright. She’s just been cranky lately. We don’t really know our father so…”
“Thats my fault for bringing it up!” Noah chimed in.
“No, its not.” Lorie smiled. “Now lets check out this cool new pad.” 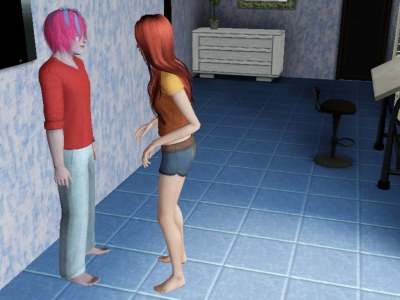 It had been a few days and they had all settled in nicely. Everyone was enjoying the extra space they all had. Lorie and Leia shared a room like they always had, Caleb and Noah bunked and Daisy of course had her own room. (She had won rock paper scissors against the girls. Caleb and Noah had no choice but to accept their living arrangements.)  Noah decided that now was a better time than ever to make his move.
“Lorie…can I talk to you?” Noah had knocked on her door. It was only 10 am on a saturday morning, why would he think that she was awake?
“Yeah…whats up?” Noah looked around the room. Leia had been off to work already. She was a kindergarten teacher and as it was nearing graduation, she had to work weekends to set everything up.
“I need some girl advice. You see, theres this girl I’m kind of crazy about. I need to tell her how I feel but, considering my last two relationships didn’t work out so well, I wanted a fresh take on it. Can you help me?”
It took everything in Lorie to fight back the tears. She knew this day was coming. Someone like Noah had of course been snatched up by some other girl. Just when she was starting to accept her feelings. “Who is she?” She could feel her words tremble.
“Lorie…are you alright?” He reached out to place a hand on her shoulder and she flinched backwards, pushing him away.
“I‘m fine. I just thought that I’d have a chance with you. You’re already in love with another girl…”
Noah sighed. He hadn’t seen it coming. Lorie was in love with him?  He felt like such a jackass for not seeing what was right in front of him. “Lorie…”
“I know. Forget about me, alright? I understand the way you feel about another girl is the way I feel about you so I can’t really be mad at you. I’m human and it hurts, but I’ll get over it. I’m not going to hold it against you.”
“Thank you, Lorie. I know you’ll find someone who will treat you like the princess that you are.”
Lorie sniffled. “Is it Leia?”
“How did you know?”
“First two relationships? Corrine and the purple hair girl. Besides, the way you look at her and hang on every word she says. You look like a love sick puppy honestly. I was just hoping that I saw it all wrong. She’s my sister and I know she cares about you, so just go out there and be yourself. Don’t put on any act in front of her. If I can’t have you then I’m glad it’s Leia that gets to be with you.” She let out a small laugh. “Just ask her out and I’ll handle the rest.”
“Do you think she’ll say yes?”
“Oh yeah because if she doesn’t, she’ll have me to deal with.”
______________________________________________________________________________
This chapter is a bit shorter than the others but it’s only because I want to put the date into its own chapter. There you have it, Leia was the winner by a long shot! Also, some shameless advertising here but if you’d like you can check out my Sims 4 CAS Demo review on my other blog here: Sims 4 CAS.