“I’m glad you could make it Noah!” Leia smiled. She hated the formality but she didn’t want to upset Ambrose anymore by being too overly attached to Noah.

“This feels so weird,” he told her honestly. “We’ve been married for so many years, I hate being like this.”

“I know. But you were the one who said you have to gradually come into the boys’ lives, not me.”

“I’m so sorry. This is all my fault. If I would have just warned the kids that you were coming out of jail, Ambrose would have been able to cope with it better. I explained the whole jail situation to Apollo and unlike Ambrose, he seems really excited to see you again. I guess it’s different because he knew you when he was a toddler.”

“Yes! Ambrose was yelling all about how much nerve you had coming back here and Apollo defended you. He asked me what Ambrose was yelling about and when he found out you were out of jail, he was so excited he began to shake. Right now, he’s having a rough patch with his best friend, so this may be the thing that’ll snap him out of it, because that girl Katherine is the best thing to happen to him. She kept him grounded. He’s the same sweet boy that you left.”

“A girl? That would make a boy a better person.” Noah smirked. “Have I really been gone that long? My son is fourteen years old. I can’t believe it.”

“And starting high school after the summer. Can you believe it?”

“Tasha isn’t so little anymore either. I went over there to see Daisy and Cyrus and Tasha was so shy around me.” Noah hated this. He felt like an outsider in his own family. He was starting to think that his decision to go to jail might have hurt his family more than it helped them. All he knew was that he was miserable. What Ambrose said really got to him. Noah had missed all of the milestone in his sons’ lives and his wife’s as well. Would he ever be able to insert himself back in their lives? 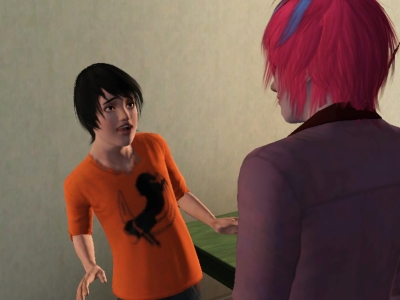 “Is it really you?”  Apollo asked in awe. If you didn’t know any better you would think he was meeting a celebrity.

“Is it?” Noah checked his hands. “Everything seems to be in place. I didn’t wake up as an alien did I?” Noah joked.

Noah nodded. “I see your mom when I look at you, but I guess you have my lips too. And her eyes. You’re lucky that your parents are both attractive.”

Apollo grinned. “Yeah, I know. I’m a stud! It would be so cool if you came over and played some video games with me!” Apollo chatted excitedly, jumping from topic to topic as if he was a child.

“I‘m a little rusty when it comes to those games, but I’d love to. Do you have Alien Invasion?  Are they even making more of them?”

“I LOVE Alien Invasion! My favorite is five. Mom and I beat the entire game.”

“The entire game?” Noah asked, shocked. “Your mom and I only got up to level eighteen. No matter how hard we tried, that boss hit us with those laser beams.”

“You need to have one person attack and the other deflect the attacks and when his health is about half, you both start to attack.”

Noah felt so relieved. Talking to Apollo was easy. He felt like ten years hadn’t passed at all between them. If only Ambrose would give him the time of day as well. “So, what else do you like besides video games?”

“Cars,” Apollo grinned. “I wanted to sign up for drivers Ed at school, but all of the spots were taken. I figured I’d take it next year, because I can’t take the test until I’m 16.”

“Well, if you really want to learn, I can teach you how to drive. If you’re comfortable with it.”

“Really!?” Apollo jumped at the chance. He had waited ten years to see his dad. All of the anxieties he had felt about Katherine had turned into anxieties about his dad. Would Noah like him? Would he be nice? What if he didn’t want anything to do with him? Both Apollo’s and Noah’s anxieties melted when they came face to face. A sort of familiarity between the two had been dug up and both were going to cling to it to put the pieces back together. “That would be awesome!”

“You know,” Leia said coming into the room, “We have some time before Ambrose will be done getting ready. Why don’t you guys drive around now?“

Noah looked to Apollo, “Want to?”

“Heck yeah, dad.” Apollo smiled. His childlike behavior brought a smile to her face. He had become as excited as a kid in a candy shop when he was around his dad. This was the sort of reaction she was hoping for. Dad. Noah’s heart warmed at the word. 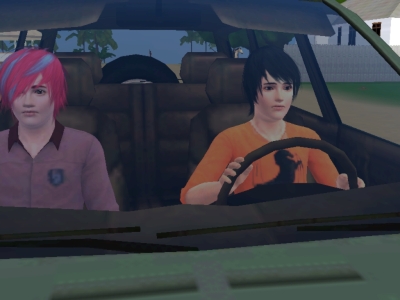 “We’ll only go around the block a few times, alright?”  Apollo nodded. “Ok, make sure when you go to make the turn you slow down.”

Excellent? Apollo was ecstatic. Only an hour into reuniting with his dad and he was already getting praised. He was thinking about all of the things the two would do together. Movies, video games, roller skating, arcades. The possibilities were endless.

Ambrose wasn’t too happy to see Noah again, especially on his day. He was silent the entire ride there while Apollo chatted away happily to Noah. Ambrose kept shooting the two dirty looks. At the festival, Leia suggested Noah buy the kids some snacks while they waited for Caleb to arrive.

“What can I get you Ambrose?” Noah asked.

“Nothing. I don’t want anything from you,” He crossed his arms over his chest.

“Are you sure? I’ll get you anything you want.”

“You can’t bribe me with delicious snacks. I already told you I don’t need anything from you.” He began to walk away towards his mother.  “Why would you invite him on my birthday?” He asked her.

“Be nice Ambrose. he’s your father. He hasn’t done anything wrong to you. He’s trying really hard.”

“That’s exactly it. He hasn’t done anything.” Leia couldn’t understand where the animosity was coming from. If you listened to Ambrose talk you’d think he was at least as old as Apollo.

“Our dad is here, it’s what we always wanted,” Apollo told him.

“It’s what you always wanted, not me. I’m going to get a snow cone, happy birthday to me!”

“Ambrose!” Leia called after him/

“Give him a minute to cool off,” Caleb said, coming in to view.

“Hey, Noah.” Caleb hugged his brother. “You look good. I’m sorry it took so long for us to meet up.”

“It’s ok…” He answered absentmindedly. He was watching Ambrose walk away.

“Don’t worry about him too much. I don’t know why he’s angry, but usually when he’s mad the only thing that’ll help him cool off is if he’s alone.”

Noah nodded, a bit hurt. That should have been him, explaining to Caleb how to handle his son. The way Caleb addressed Noah was as if he was AMbrose’s father and Noah began to understand. Caleb was the man who raised Ambrose as a toddler. Ambrose grew attached to him and it was Noah’s fault. He made Caleb promise to take care of his children for him. He never thought his own children would end up hating him and loving his brother.

“Thanks for the nachos…” Apollo offered weekly.

Noah turned to Apollo and smiled sweetly. “Of course son.” He was testing out the word ‘son’ and it still seemed so stiff and awkward.

“If Ambrose doesn’t want to hang out with you, do you want to roller skate with me? I’m pretty good, mom took me a few weeks ago for my birthday. Even grandpa was skating. it was pretty fun.”

“Noah…you should have seen dad. His arms were flailing about wildly. We all thought he was going to fall, but he was better than all of us!” Caleb grinned.

“Really?” Noah smiled weakly. His mind was still on how he could get his son to accept him. “I think I’ll take you up on that offer, Apollo.” The two went off to skate.

“I think I’m going to go talk to Ambrose and see why he’s so mad at his father,” Caleb said, also getting up.

“I guess I’ll just watch my boys skate then,” Leia sighed getting up. Trying to make everyone happy was so stressful. She had never thought that this was how her life was going to go. Not even in the slightest.

“Lei, everything will work itself out,” Caleb tried to reassure her.

“Uh, maybe you could call me uncle Caleb?”

“This never happened before that guy came here.”

“That guy is your dad,” Caleb told him.

“He looks just like you, kid. The hair isn’t a dead giveaway?”

“I don’t need a dad,” Ambrose stomped his foot. “I have you. You won’t leave me. He will just leave again!”

“Ambrose,” Caleb looked at him sharply. “Noah is my younger brother. You have to show him respect as your father. I love you so much, but I can’t let you treat him like this. He is trying so hard to be the best dad to you. He’s trying to get to know you, but you keep pushing him away. I’m just your uncle, he’s your father.”

“No, you’re more than that.” Ambrose looked at him. “A dad is someone who takes care of their children and takes them out to do fun things and watches them when they get awards. He never did any of that for me. You did. You’re not my dad but you acted like it more than he has.”

“Ambrose…” Caleb’s heart was breaking. Noah was his brother and the reason Ambrose wanted nothing to do with him was because of Caleb. He was the home wrecker. “He hasn’t done anything because he was busy protecting you and your brother. He wants the best for you but you won’t even give him a chance.”

Ambrose looked up with a face of betrayal. “Whatever,” he murmured before he walked away. 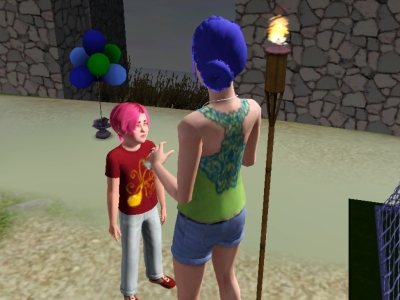 He walked away only to be stopped by Leia.

“Ambrose!” She called out.

“What now mom?” Ambrose whined. “Are you going to lecture me too?”

“I’m not trying to lecture you sweetheart, I just want to know why you’re acting like this.”

“Why don’t you like him? You’ve hardly gotten to know him.”

“Don’t you think it’s too late to get to know him? All of my friends have dads. They go out and do things together…”

“He’s here now trying to do things with you…” Leia began but Ambrose cut her off.

“It’s too late now mom! He should have been here when I was born! I don’t care about him trying to protect me, I don’t even know what that means! All he did was hurt me. I didn’t need him to grow up, and I don’t need him now!” As if it was his signature move, Ambrose stomped off before his mother could say anything.

“Ambrose!” Leia called after him but he just ignored her. “I understand that you’re upset, but you’re being so disrespectful to me. I am your mother, not your friend!”

Ambrose stopped, turned around for a minute and hesitated as if he didn’t want to say anything. He looked at his mother with tears brimming his eyes and told her the one thing that was on his mind the entire time, “Why would you invite someone who doesn’t love me to my birthday party?”

“Ambrose no. He does love you!” She tried to tell him but he wouldn’t listen.