The boys didn’t know what time they had woken up. Their phone batteries were dead and there was no light underground. After eating, the guys began their adventure once again.

Ambrose stood on the tile as they had been doing before, and the door opened. When they began to walk towards it though, it closed again. “Wait a second, Ambrose stand on that panel again.” Ambrose did as he was told. The door opened once more. “Ok now step off.” When Ambrose stepped to the side, the door closed abruptly. “When you stand on it, it opens.”

“So, one of us has to stand on it, while the others go through?” Ambrose asked.

“Not exactly,” Apollo shook his head. “That wouldn’t work. One of us would get left behind. If you stand on it and we go through, who is going to stand on it long enough for you to go through?”

“There’s got to be another way. Let’s see.” Noah put his finger on his chin and began to walk around.

“We need like one of those statues to stay on it!” Ambrose tried to redeem himself.

“Hmm…wait a minute. You’re on to something, Ambrose. Hey dad, do you see that statue over there? All of the other ones are closed off behind a fence, this one isn’t,” Apollo noted.

“So if we can pull it on to the panel, we’d all be able to go through! Good teamwork guys!” Noah patted each boy on the back. Ambrose didn’t even flinch. “I think I may be able to move it on my own.”

Noah pulled the statue to the panel, and as they thought, the door slid open and remained open. The three boys were able to go through and make it to the next room.

Getting through to the next room was simple enough, or so they thought. There were two locked doors and the only thing in the small dungeon room was a hole in the wall, which Apollo refused to put his arm in, despite Ambrose’s encouragement. Noah stuck his arm in there and flipped a switch that caused the door on the left hand side to open.

“Are you serious? Why did mine have bugs in it?”

“Aww man! I was hoping for another show!” Ambrose giggled. Apollo shot him a look and Ambrose quieted himself.

“I’ll check that room and see where it leads, you two stay put,” Noah said.

“No way, we’re coming with you!” Ambrose grabbed Apollo’s arm. “What if there’s treasure?”

“Who doesn’t like gold!?” His small eyes lit up. 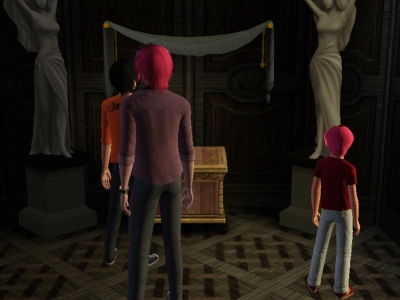 “There really is treasure in here!” Apollo exclaimed.

“Oh man, look at all these gold coins. Can you imagine what we could buy with this?”

Ambrose glared at him, “I was thinking along the lines of the pumpkin man action figures!”

“Action figures? What are you five? Come on man, imagine all of the video games you could buy!” Apollo interjected.

“You too?” Noah sweatdropped. “You boys don’t want to go to college?”

“Of course I do, but I’m not even a freshman yet. I’d like to worry about other things,” Apollo admitted.

“Yeah, he’s got a girl he’s trying to impress!” Ambrose stuck his tongue out.

Apollo groaned. For some reason, Ambrose was in a good mood, and that meant he wasn’t completely ignoring Noah’s appearance as he was just yesterday morning. Apollo was happy with the sudden change, but he was getting a bit jealous. Ambrose was a much nicer person when he hated Noah, or maybe it was just that Apollo could tolerate his brother more when he didn’t have to share his father. Apollo quickly shook the thought from his head. No. His mother always told him to put Ambrose before anyone else. When push came to shove, it would be his brother who would be able to pick up the pieces. Apollo felt a hand on his shoulder and he jumped. “It’s alright, one day you’ll find a girl that you’ll want to impress, too.” Noah smiled.

“It’s not like that…” Apollo began but his low voice was washed away by Ambrose’s sudden outburst.

Ambrose lowered his eyes, “No I won’t! I already told you that I have everyone I need in my life right now.”

“Don’t be ridiculous Ambrose.” Apollo shook his head. He knew exactly what Ambrose meant. Apollo didn’t know what he wanted. When his father spent extra effort on Ambrose, it made him upset, but on the other hand, seeing Ambrose completely deny Noah, even in a little way like he just did, hurt him even more. Why couldn’t everyone be happy? It was as if Ambrose caught himself enjoying the time he spent with Noah, and then punishing himself for it. Apollo felt even more guilty for just thinking about Ambrose that way mere minutes ago.

“Let’s just grab the treasure and get out of here,” Ambrose grumbled. 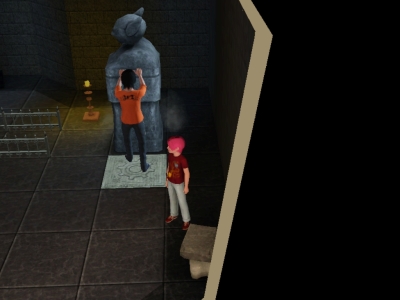 Unfortunately for the boys, the adventure wasn’t even close to being over. Ambrose’s personality had made a full 360. He was no longer happily bantering with Noah and Apollo. Now, he was being distant, ignoring Noah and Apollo altogether. If they’d ask him something that he absolutely had to answer, he’d either just send a nod in their direction or let out a low grumble.

“Ambrose, I can’t do this alone. I need your help, this statue is so heavy!”

“Why don’t you ask him for help?” He pointed towards the door, where Noah was in another room exploring.

“He’s more important to you than me,” Ambrose said bluntly.

“Ambrose, what are you talking about?”

“He’s only been here a month. You’ve known me so much longer!” Ambrose cried out desperately. “Why does he matter so much! We’ve never needed him before!”

“Listen to me,” Apollo kneeled down by Ambrose’s defeated figure. “It’s a confusing time right now, right?” Ambrose nodded in response. “You don’t know what to do with this guy who just walked into our lives. I get that. There’s a difference between me and you Ambrose, and I don’t know if you’re old enough to understand this right now, but…he held me and played with me when I was little, like Uncle Caleb did for you. It’s going to be hard to adjust to everything, but you have to understand that I know he’s not a bad man. You do trust me right?”

“I trust you…but I don’t know if I can love him like you do…I don’t understand…” He shook his head.

“You don’t have to love him right away. It would be hard to do that. Why don’t you start off small? Let’s just get through with this adventure together. Don’t ignore him when he talks to you, he isn’t being mean or anything. If he was bad news, I wouldn’t allow him anywhere near you Ambrose.”
Little did the boys know that Noah stood by the door and heard all of it. He couldn’t be more proud of Apollo right now. It brought tears to his eyes. This was what he was missing out on in ten years. It reminded him of Leia’s relationship with Lorie. He saw Leia’s hesitation in Ambrose’s eyes and Lorie’s determination and kindness in Apollo’s. He was broken from his thoughts by Apollo’s small smile.“Ready to go?” 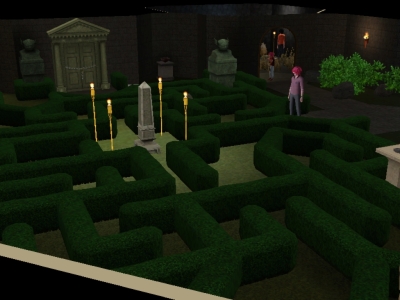 “Come on guys, this is the toughest obstacle we’ve faced the entire adventure, we’re really going to have to work together to get through,” Noah said.

Ambrosed rolled his eyes at the maze in front of him. “You’re joking right? We can just jump over these grass blocks if we get stuck.”

Noah sighed, “We still need to work together though.”

“Let’s split up, we’ll look for loot and you can look for a way to open that door alright?” Apollo suggested to Noah.

Noah smiled thoughtfully. he was happy Leia had forced them to do this. “Let’s see who can finish first.” 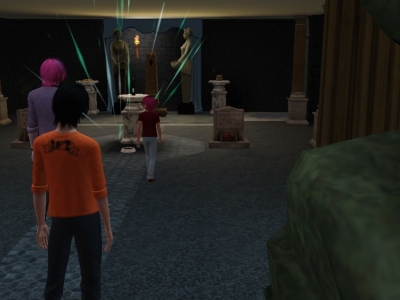 “Got it!” Noah called out within minutes.

“I don’t like to brag, but I’m kind of a genius,” Noah jokingly admitted.

“Apollo senior,” Ambrose rolled his eyes. Was everyone but him a complete genius in this family? “Treasure!” He squealed in delight, quickly changing the subject. Noah had helped the boys loot the chamber. He found more gold coins to add to their collection, something that looked like an ancient relic, and some aged wine that he’d have to reward Leia with later for coming up with this genius idea (even if it the expedition was an excuse for her to have some alone time).

The three of them entered the last and final room of the tomb. “I don’t see any other doors. Those stairs look like they lead out of the tomb, since they’re going up and not down.”

“Also…maybe because there’s something shining down in that hole over there,” Ambrose weakly suggested.

“Could that be the treasure?” Apollo asked, stepping towards it.

“Careful, wouldn’t want any bugs to come out at you!” Noah joked.

“You too!?” Apollo explained but couldn’t stop the smile from forming on his face. This was how it was supposed to be. A little late was better than never. 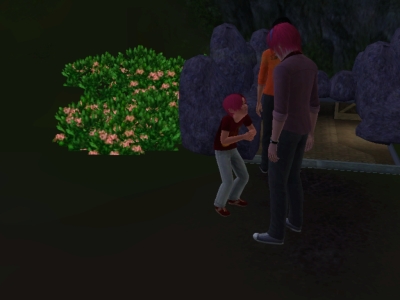 Noah raised his brow, “Is there something you’d like to say?”

“I can’t believe that the treasure was only a stupid baseball!”

“Ok, ok fine. I had fun exploring that tomb.” He could see the smile forming on Noah’s face. “But, that doesn’t mean I’m going to call you dad or anything!”

Noah just chuckled. He would take it. As long as his sons had fun and worked together, even if Ambrose never recognised him as his father, it would all be okay because he was positive that Apollo and Ambrose had each other’s backs. 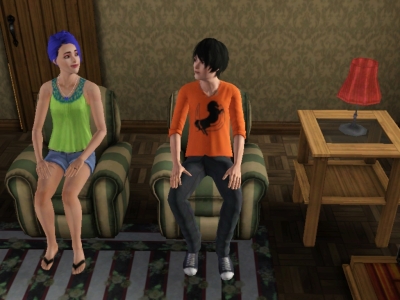 “How was exploring the tomb?” Leia asked her son.

“It was really fun, the best part was that Ambrose and dad actually got along. Can you believe it?”

“It’s a start though, right?” Leia patted his head. “Thank you.”

“Being there for Ambrose,” Noah had told Leia about what Apollo told Ambrose. It brought tears to her eyes when Noah told her that she was a good mom.

“It’s what big brothers are supposed to do,” Apollo smiled.

The rest of the vacation flew by. Apollo was able to sit down and finish his summer reading assignment. (Which Katherine had to remind him about, yes they were texting again, neither acknowledging the weirdness that happened before.) Ambrose was acknowledging Noah’s existence. He even initiated a pillow fight, but would deny it if anyone brought it up. He was still mad at Noah, but he promised to make an effort for Apollo. Leia, loving the free time, was able to eat French Crepes, and drink the fantastic wine Noah brought her. Nobody killed each other, so all in all, the Gray family had a nice family vacation.

If you’d like to check out Caleb’s side story, you can over here: How To Be A Star. It is completed. Thank you for reading 🙂