University life wasn’t as exciting as Apollo thought it would be. He woke up in the morning, went to class, quickly scarfed down some sort of lunch, headed to his next class and then went back to the dormitory. From there he could either sleep, study or do his homework. There wasn’t nearly enough time to do everything he wanted to. He was so stressed out from everything. 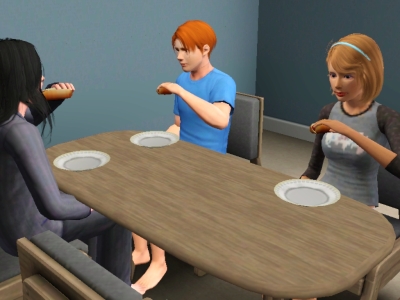 That was when Tommy though it was time for an intervention. Surprisingly, Damian fit very well into their group, and no one knew why. For some reason, Damian’s quiet and stoic demeanor was the perfect glue to keep Lynette and Tommy from bickering.

“Hey y’all how’s it hanging!?” Tommy slapped Damian on the back and squeezed Katherine’s shoulder lovingly before sitting down for breakfast.

“You’re too hyper this morning!” Katherine giggled, hitting his arm.

“Alright, alright. I’ll tone it down a notch. Have you guys noticed Apollo recently?” Katherine still tensed at the sound of his name. The two had been able to interact with each other like nothing happened but they both knew their friendship would never be the same. Lynette and Tommy were oblivious to it.

“Poor guy is overworking himself. Apparently the business major is one of the most intense offered at Sims University. Plus I think he’s taking some honor courses as well. No wonder he’s stressed out,” Katherine said.

“I think he needs to have some fun, what about you guys?” Both Damian and Katherine nodded their heads. “Let’s invite him to go bowling tonight. You’ll be there right, Damian?” Damian shook his head, but didn’t give a reason. They were used to his mysterious ways at this point.

With a plan in mind, Tommy happily made his way over to Lynette and Apollo who seemed to be deep in conversation about art.

“Do you mean those whale things I’ve been seeing painted all over the student union building?”Apollo asked.

“Yeah, it’s some sort of statement, but nobody knows what it could be.”

“Apollo, do you have plans tonight?” Tommy inserted himself into the conversation. Lynette looked up at him with a glare.

“We were having a conversation here!” Lynette crossed her arms over her chest.

Apollo laughed at her seriousness. “It’s not a big deal Lyn.” She pouted in response, knowing  that he was right. this was a daily thing with them. It had already been a full month at Sims University.

“Me and Kath are going to Bowlarama tonight, you can come if you want.”

“Sounds like a great time, but I need to catch up on some sleep before I crash. I don’t know how long this caffeine will last me,” Apollo said.

“What I meant to say was, you are totally coming with us and we’re not taking no for an answer.You’ve been locked up in your room for like a month. All you ever do is go to class and then come home and study. College is about finding yourself, having fun, meeting new people. You’re not going to do that this way.”

“I need to get good grades…. I have to pass all of my classes–” Apollo began.

“Apollo, I actually agree with the meathead jock over here. You’re overworking yourself. You’re just going to burn out eventually. You need to relax once and awhile.” She was right. He had felt himself slowly losing touch with reality. He was originally so excited to come here but now he dreaded it. There wasn’t a moment he ever had to himself to just relax. Even when he was talking to his friends he was worrying about when he would have time to write that next big term paper. Stressed was an understatement. He was all for a night out, just not with Tommy and Katherine…well, just not with Katherine. When Apollo was with Tommy, it was as if things never changed between the two. Tommy went out of his way to rekindle their friendship. It was Katherine who Apollo could not decipher. He had no desire to be around the two love birds, it would just stress him out even more.

He knew he wouldn’t get off the hook that easily though so he agreed to it. “Fine, I’ll come tonight. Are we meeting there at 7?”

“Uh-huh! This is awesome, you’ll have a blast. I’ll see you tonight!” He patted his back and walked over to Katherine to tell her the news. She probably wouldn’t be too thrilled about it.

Apollo turned around to talk to Lynette and saw her walking away. “Hey, Lyn…wait up!”

“What’s up? I need to go get dressed for class, so make it quick.”

“You heard all of that right?” He asked. She nodded. “I need you to come with me tonight.”

She chuckled. “Why,are the love birds going to be too much for you to handle on your own?”
“Yes, exactly. The three of us kind of have a history. Since you’re new to Tommy’s family I didn’t know if he told you or not but we were good friends that split apart in high school. It’s a long story, but now it’s kind of awkward to be around both of them together.”

“Ok, I’ll come, but on one condition, you have to tell me the story of you three one day. I feel like such a black sheep around you guys sometimes, it’d be nice to be let in n the secret once and a while.”

Apollo nodded. “I can do that, but it’s a really long story. You’d have to brace yourself. One of these days I’ll let you know.”

“Well, I’m off to go get changed, so I’ll see you around 7ish. Keep a lookout for those murals on campus. Maybe your stroke of genius can find out their hidden meaning.”

“Why do you always invite my step sister?” Tommy groaned.

Katherine hit his arm. “You invited her right in front of Apollo. If you didn’t want her to come you should have asked him discretely.”

“Nice to know my own roommate is tired of seeing me too,” Lynette lowered her eyes.

“So, only Apollo? What do you even see in her. She can’t even be tame enough to be civil to my girlfriend, our best friend.”

Our best friend. Apollo shook his head. It wasn’t like that at all. At least not anymore. At one time he would have agreed with Tommy, but right now he couldn’t be any more wrong. “Lynette is my friend and I invited her. I’m not tossing her aside for Katherine.”  Apollo didn’t notice the small smile forming on Lynette’s lips. She couldn’t believe he was actually sticking up for her. She knew from the moment she met him that he was something special.

“Let’s just bowl! Me and Lynette versus you and Apollo. That way Apollo can bowl against Lynette and I can bowl against you!” Katherine proposed quickly. She didn’t know what Apollo would say next and she was terrified that her little secret would get out.

“You’re so going down,” Lynette taunted.

“Am I?” Apollo smirked at her. They both aimed their balls and swung at the very same time. Lynette seemed to have put too much force into her throw and ended up sliding a few inches up with the ball before she could let go of the finger holes. Apollo could hear Katherine’s gasp of shock and Tommy’s stifled laugh. Apollo rushed to her side to help her up. “Are you alright?”

She looked away in embarrassment. “I’m fine,” She mumbled.

“Please Tommy, don’t do this!“ Katherine pleaded. Tommy was such a nice guy until he was around Lynette. They had their own problems to work out and neither Apollo nor Katherine could do anything about it. It had to do with their families and only they could work it out amongst themselves.

Apollo turned to them sharply. “Are you serious right now? I thought this was supposed to be fun, to help me relieve stress. I’m just feeling more stressed right now!”

“I want to go back to the dorms, is that going to be a problem?” Lynette asked Apollo. Tommy and Katherine seemed pretty into their game and didn’t notice the conversation.

“Not really. I was thinking the same thing. They’re both too much and I feel so much more stressed than I would be if I was studying. Let’s head back.”

“What? Already?” Tommy asked. He had finished his turn and was about to let Apollo know it was his.

“I’m sorry Tommy but right now you’re being so rude to Lynette. It isn’t cool. I invited her, so you shouldn’t treat her like that.” He could see Katherine slowly nodding in agreement.

“I was just joking, can’t she take a joke? Besides when did you two become so buddy buddy, are you trying to get lucky or something?” Tommy said irritably.

“Who do you think he is, you?” Lynette spat.

“Unlike you two, I value my friendships. For people trying to draw me back into relationships with them, you’re doing a terrible job. Maybe it’s because everyone is so tense right now, I think we should all part ways and take some space right now,” Apollo said.

“Tommy, I think he’s right. Maybe we should just part ways for now. I apologize Lynette, Apollo. We were being really rude.”

“Whatever. I don’t want to do this right now. Come on Lyn, we’ll take a taxi back to the dorms.”

Apollo woke up the next morning, dreading the scene he would behold at the breakfast table. Last night hadn’t gone exactly as planned. Apollo felt like he was dealing with high schoolers all over again. Was the transition to university worthless? He thought that the responsibility of living on your own would have made even the most unsightly kid grow up. It didn’t feel different to him. He had felt himself become more mature, but the others around him…they didn’t know what they wanted. He sighed, looking up at the painting Ambrose had given him. He had often stared at it, trying to figure it out. He’d asked Ambrose what it meant, but he told Apollo that it meant something else to everyone, all art did. It looked like there was a waterfall, next to a small village with the stars shining brightly. What did that all mean? Peace? Harmony? Serenity? Whatever it was, it made him feel relaxed. When he thought about it, everything seemed to make sense, until he was transported back into the real world. He was broken from his thoughts by a loud shriek. He threw on his jacket and ran down the stairs to see what was happening.