Apollo ran down the stairs and saw the dormitory kitchen ablaze.

“Katherine!” Apollo shouted. Why was she just standing there? She’d be burned if the fire spread. “Move back!” She stood frozen in fear, unable to move. Apollo did some quick thinking and pushed her backwards. He looked around the kitchen, cursing under his breath when he didn’t see the fire extinguisher.

“It’s in the Cabinet.” Apollo turned around to see Damian calmly pointing to the cabinet behind where Katherine once stood. He was thankful Damian was there, otherwise he might not have caught the fire on time. 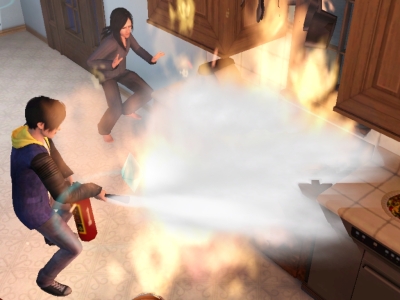 The fire was spreading quickly from the stove to the counters next to it. Apollo didn’t even know he knew how to use a fire extinguisher. It was one of those things that was always there yet he never touched. His hands moved on their own, Whether it be to save Katherine or himself, he didn’t know. He wasn’t thinking. Before he was even aware of what was happening, the fire was extinguished.

“Me? You arrived just on time! I would have never found the fire extinguisher,” Apollo admitted.
Damian shrugged, but a small smirk played on his lips. He waved the two off and left the kitchen, as if he was only there to prevent any harm to the two college students. “Katherine are you okay?” Apollo turned to her. She was shaking. 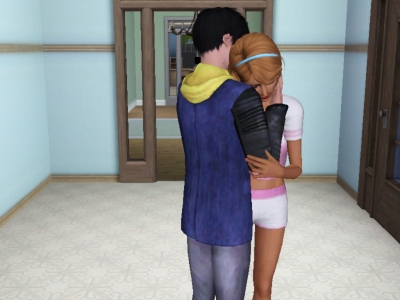 She grabbed onto his arm and clutched his chest tightly. “Apollo!”

“Are you alright?” He was taken aback. He wasn’t Katherine’s biggest fan, yet he wasn’t completely heartless either.

“It was so close…the fire! We could have all died because I was too scared to move!” She cried.

“Hey, don’t worry about stuff like that! I was there for a reason. At least you screamed right? There’s eight of us in this dormitory, someone was bound to have heard you.”

“And what if no one did? What if everyone was asleep or something?” She looked up into his eyes.

“That didn’t happen. I was awake. You just have to find your voice next time, and you’ll be fine. I’m not going to let anything happen to you while I’m here. Not to anyone.”

“Thank you.” She wiped her eyes and stepped back from Apollo’s comforting embrace.

“I need to get to class now, but please be more careful okay?” She nodded and Apollo left for class. He had definitely seen a different side of Katherine today. 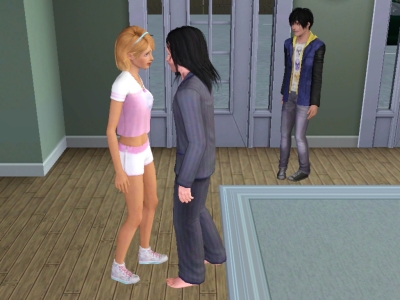 Apollo was ecstatic to hear his teacher had been sick. Well, he felt bad that she had been sick, but he was thankful for the day off. There was supposed to be a huge test and thanks to the incident this morning, his head wasn’t fully in it. His professor calling in sick was a miracle. He had decided to come home early, and take a much needed nap. Upon entering the house, he was promptly greeted with a shocking sight, There was Katherine and Damian…flirting? He rubbed his eyes to make sure he wasn’t seeing things. Damian didn’t seem like the kind to flirt, and Katherine, well he somehow thought she was faithful to Tommy now. He stood there for a moment contemplating his next move when Katherine broke him from his thoughts.

“Apollo? I swear, it’s not what it looks like!” Katherine cried, quickly distancing herself from Damian, who seemed unphased by being caught.

She looked away. “I don’t know,” She mumbled. Damian was a man of few words as always.

“Listen, none of this is my business so, I’ll leave it to you. I just want to take a nap.” Apollo pushed passed Katherine who was trying to block his way to the stairs. “Tommy doesn’t deserve this.”

“Apollo wait! Please don’t tell him! I can explain if you let me!”

“I don’t care Katherine.” Apollo shook his head. He thought he was beginning to see a different side of her, but now that was destroyed.

Apollo was conflicted. Should he tell Tommy? It was the right thing to do, he’d want Tommy to tell him if it was the other way around. What if Tommy didn’t believe him? The hatred he had felt towards Katherine and Tommy in the beginning of the term had simmered down. He realized that Tommy was truly going through a hard time in high school and thus clinged to the established social order. Little by little Tommy opened up to Apollo and told him about his parent’s sudden split and how fast his father got remarried. Tommy was eighteen and allowed to live with whatever parent he wanted, but really there was no choice. His mother had fled Sunlit Tides with all of his father’s money. Without the support of his stepmother, also Lynette’s birth mother, and his baseball scholarship, he’d have not been able to study physical education at Sims University. It was a rough time for him and countless times he thought about telling Tommy about what had happened between himself and Katherine but he didn’t have the heart. Tommy looked like Katherine was the only thing keeping him sane but you wouldn’t know from his bubbly exterior. Apollo was afraid that if he told Tommy, he’d lose his friendship and he didn’t want that. He’d hope some sleep would help him decide what to do in the morning. 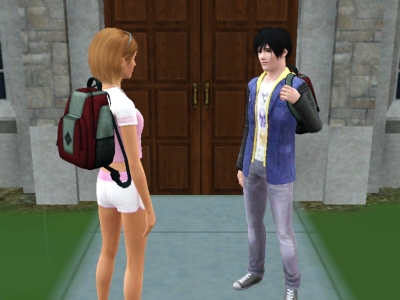 Apollo ended up waking up late. He was so preoccupied last night that he forgot to set his alarm. He quickly apologized to Lynette for not being able to have breakfast with her as he always did and ran out of the dorm to make it to class in time. The lecture was boring as usual, but it didn’t stop him from taking notes. His finals were in a couple of weeks and he had to ace them. He walked out of the classroom, shaking his hand, trying to get the feeling back.

Apollo was startled to see Katherine in front of him. “What are you doing here?”

“Stop avoiding me! We need to talk about what you saw yesterday. It wasn’t what you think.”

“But, I care!” She exclaimed. “I don’t want you to think that I’m stringing three guys along!”

“Hey, as far as I’m concerned, you’re cheating on Tommy. You kissed me while you were dating Tommy, and then I caught you flirting with Damian, of all people. What the hell. Tommy treats you like a queen.”

“I know he does, but I’m not cheating on him! I kissed you because you looked so sad at your grandmother’s funeral, I wanted to make you feel better! But I wasn’t flirting with Damian, at least not intentionally. It was like I was in a trance when I looked into his eyes. I don’t know what came over me, I didn’t even realize I was doing it. I swear. I know it sounds crazy but –“

“It sounds ridiculous! You expect me to believe that Damian casted some sort of spell on you to make you infatuated with him? Is that what you’re implying?”

“I know it sounds crazy, but I swear I wasn’t in control of my body!” Katherine cried.

“Oh come on, that’s the craziest thing you’ve ever said. I know better than anyone that Damian is a bit different, he’s my roommate, but he’s not some supernatural. They aren’t real.”

Apollo had heard enough of her nonsense and began to walk away. He was sure what he had to do. He needed to talk to Tommy as soon as he could, and Katherine couldn’t be anywhere near them. She was deluded and she let all of the attention she was recieving get to her head. She wasn’t happy with just Tommy who gave her all of his attention, she needed Damian and Apollo himself. Who was next? Tommy’s roommate Mason?

“Apollo wait! I’m not done talking to you!” She began to chase after him.

“I’m going to be late to my next class sorry!” Apollo lied. He began to sprint faster and faster until he was sure he was out of her site. It wasn’t like he was afraid she was going to hurt him or anything. It was the exact opposite. Katherine thought she was in control, but he didn’t want to hurt her by slamming her dynamic. it wasn’t in his nature to be so rude and he’s been known to act his worst in front of Katherine. He headed home to talk to Tommy.

“Pleasure is not mine at all.” Damian continued to type on the computer.

“That’s rude. You’re not going to even acknowledge your old friend. After all these years!” Mason feigned shock.

“Friend? Stop playing games Moon. What the hell do you want?” Damian spun his chair around to look at Mason.

“Do you remember what we promised years ago in Moonlight falls? That we were going to fight against the guardians? What happened to that? Are you on their side now?”

“Yeah right, I hate those guys who think they can just change everything.”

“If that’s the case, then why are you interfering in my plans?”

“I have no idea what you’re talking about.” It was now Damian’s turn to smirk.

“Leave Apollo and that girl alone! We need their timelines to intertwine if we’re going to stop the guardians!”

“I work alone. I have my own plan in effect and it doesn’t involve intertwining anyone’s timeline.” Damian told the now furious Mason.

“Oh, you think you’re so slick trying to undo my work. You’ve made a huge mistake buddy. You better watch your back. You don’t know what I’d do to protect MY future.” He glared at Damian before stomping out of the room. He was afraid of this. He knew seeing Damian on campus meant bad news. He was supposed to still be in Moonlight Falls. This wouldn’t stop Mason. He was about to enact plan B.