“Well well well, look who we have here.” Mason looked around to find the familiar voice, his eyes landing on the pale beauty leaned against one of the building’s walls.

“Farina? Uh, I mean Puzzle,” Mason corrected. “What the heck is going on?”

“You’re close, but not close enough. It’s me again, remember from Christmas Eve? I got bored of being Athena, so I decided I’d pop up as Puzzle. It’s a shame what happened to her though. You ruined her life. Maybe Imaginary Friends are meant to stay as dolls. Why give life and snatch it from right under the person?” “Puzzle” placed a hand on her chin. “Anyway, we’re going on another mystical adventure through dimensions. This time we’ll get to see your could have been family.”

“Why are you doing this?” Mason asked, already knowing the answer. Today was Valentines day and he hated Valentines day almost as much as he hated Christmas. Why make a big deal over a single day? You should have been showing your partner how much you loved them on a daily basis. What made today special?

“I have a feeling you know why I’m doing this. Last time we met, you didn’t seem to quite get the message that I was trying to tell you. In fact, you thought the exact opposite, and fighting for a family you’ll never have is a waste of time and resources. Stop meddling in the affairs of the Gray family and start your own.” She looked at him directly in the eyes. “This is ridiculous.”

“What’s ridiculous is that you keep coming to me on every holiday, dressed up like some stupid mascot, to show me some moments that I really can live my life without seeing,” Mason fumed.

“And I’ll keep coming back until you figure it out. Love conquers all, Mason. True love…and you just can’t seem to reach that part. I’m not even just talking about romantic relationships, but families and friends. You need to find a life of your own and leave the Grays alone.”

“Can we just get on with this little show so I can go back home and take a nap?” Mason grumbled, eyes forward.

“Alright.” “Puzzle” shrugged and headed towards the door.

“Do you know where we are?” She asked.

“It shouldn’t,” she continued. “You’ve never been here before. This is Bridgeport. It’s a busy city, unlike some of the other worlds you’ve been busy meddling in.”

“What am I going to see here?” Mason ignored her blatant remarks.

“Ahh, there she is. Your would be granddaughter.”

One girl rose from the couch and headed towards the door. Pressing a button, she began to speak into a device. “Yo.”

Another voice began to speak. “It’s us Cass, let us in.” The girl typed in a code and waited for her visitor to come in. “I’ve missed you so much!” The black haired girl threw her arms over the pink haired female’s torso. “It’s been so lonely in Lunar Lakes without you there.”

“Is that really Elsa and Cassandra?” Mason asked in shock.

“You’ve remembered their names?” “Puzzle” questioned. “Don’t get too attached, they’re part of a family that you’ll never have. We’re here so that you can see that everything that seems perfect, is too good to be true. Just watch.”

“Darling,” An elderly man walked into the room and laced his arms around Cassandra. “How are you?”

“I’m good,” Cassandra said, plopping down onto the couch. “Sorry my place isn’t that big, it’s only me and besides rent here is expensive.”

“Daddy has been so excited to see you,” Elsa said. She helped him sit on the couch before placing herself next to him.

“I’m happy to see you, Dad. How are you feeling? Better?” Cassandra asked. She hadn’t looked him in the eyes. She was afraid of seeing something that she didn’t want to. Her father was sick and it had only been getting worse. Both Else and Cassandra knew that he would be giving up soon. Instead of dealing with the problem, she ran away to Bridgeport. Elsa was the good daughter who stood by her father’s side.

“I’ve been feeling great,” Caleb said. He slowly eased his way further into the couch.

“Nothing, I’m fine.” Caleb waved the girls off.

“The cancer is back and it’s spreading. He’s old, the doctors don’t know how long his body will be able to fight it.” Elsa looked away, unable to bear seeing the heartbroken look on her older sister’s face.

“This is all nonsense. We can forget about it. Today is Valentine’s day. I didn’t come all the way over here to have you guys talking about something that you don’t even know is going to happen. I feel fine. I’m not dying anytime soon,” Caleb said.

Cassandra fought back the tears. “Dad, please don’t put this on the backburner, it’s serious.”

“You didn’t even put up any decorations,” Caleb said solemnly. He looked around the house as if searching for something. “This house doesn’t look lived in.”

“All I do is sleep here,” Cassandra admitted. “I’m training to be a mixologist and I’m always out.”

“Valentines day was mom’s favorite holiday, you could have at least put up some paper hearts or something,” Elsa said.

“I’m sorry, but I just don’t have the luxury. I’m living alone and-” Cassandra began but her sister angrily cut her off.

“You don’t want to face it. That’s why you keep yourself locked up every February 14th. Mom is dead Cassandra, you need to move on and be happy. That’s what she would want.”

“Don’t tell me what she would want, like you know,” Cassandra said angrily. She had stood up, ready for an argument when her phone began to ring. “Whatever, I need to take this call.” She stood up and walked over to the next room.

“Where are you? I thought I told you that my dad was visiting. He came all the way over from Lunar Lakes and I want you to meet him.”

“I’m so sorry. Something came up and I have to cancel. I know it’s last minute but I’m sorry. I can meet him next time he’s in town,” Nathan said.

“I don’t know if there will be a next time,” Cassandra answered. “He’s really sick. Nathan, I really wanted him to meet the guy I’m in love with. What’s so important that you’re blowing me off?” There was silence on the other line. Nathan couldn’t think quick enough. “Oh my gosh…you’re going out with her tonight aren’t you? You said you were calling it off!”

“It’s complicated. She’s the mother of my daughter, I can’t just not see her,” Nathan said.

“I’m your girlfriend and it’s Valentines day. But you know what, your baby mama is obviously more important to you. I can’t believe it took me this long to notice that.”

“Cassie, wait-” Nathan tried to pacify her but Cassandra hung up and tossed the phone on the sofa in front of her. 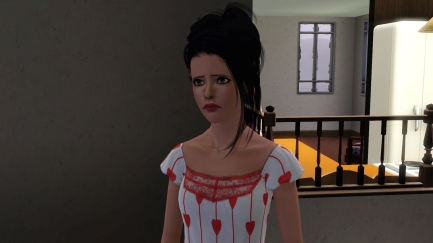 Hearing the conversation from the other room, Elsa frowned.

“Cassandra was taking her mother’s death hard. Star had been in a car accident when Cassandra had turned twenty-one. She stayed on life support for several years until the Grays could no longer afford to keep it on. It was a heartbreaking situation but their mother was a vegetable and Caleb wasn’t taking care of himself because he was always by her side. After Star passed away, Cassandra dropped out of college and stayed home. Caleb hadn’t the heart to tell her that she had to help with the bills or move out. He became sick shortly after but they were able to catch it and it went into remission. Healthwise, he had never been the same again. Cassandra couldn’t bear it so she ran away to Bridgeport one day and the rest is history,” “Puzzle” informed him.

“This is some sort of sick joke, isn’t it?” Mason questioned.

“I wish it was,” She said. “But it isn’t. This family isn’t supposed to exist. When you mess with the timeline, terrible things happen.”

Mason shook his head. “That’s not true, I’ve changed time several times and nothing like this has ever happened.”

“That’s because the timeline foresaw you doing everything that you had done before you did them.”

“No,” Mason said again. “It isn’t possible. There’s no way that could be, because I used to be Emit’s apprentice and I know that I wasn’t in of those timelines that I had interfered with.”

“Puzzle” sighed. “Did you really think it’d be that easy to fully manipulate time? Time is the worst weapon, it’s a curse. There isn’t a single person that can change the world’s timeline. No matter how much you shift and change the Gray’s timeline, it won’t have any effect, because the watcher knew you were going to do it before you even planned it out. Keep trying to outsmart the watcher, but you’ll always get the same result. The Grays will beat you every time. The Moon family, this version of it anyway, will never exist and you can’t change that fact.”

Mason lowered his eyes. “That’s a load of Bull.”

“Think what you want, the truth is the truth.” 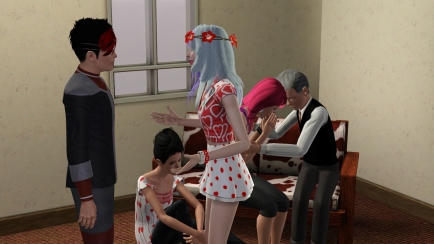 Cassandra was huddled up by her father and sister, each telling her how much they loved her. “You don’t get it,” She sobbed. “Mom is dead, soon Dad will be gone and Elsa, you’re going to go back to Lunar Lakes. I don’t even have Nathan anymore! I’m all alone! Even worse is that I took mom for granted, I wish I had more time!”

“Sweetheart, we all do, we love your mother but we couldn’t have stopped what happened to her even if we tried.” Caleb rubbed her arm soothingly. “She’s in a better place.”

“Please don’t leave me alone,” She sobbed into his arms. “Please Daddy, I need you.”

“Is that all?” Mason yawned. “That was seriously boring.”

“Why are you such a stubborn jerk?” “Puzzle” questioned. “Me? I’m nothing of the sort! You’re the jerk, pulling me out of my bed to send me here to watch this monstrosity.”

“Take a good look at them Mason. Even if you found a way to rewrite the world’s timeline, what good would it do? You’re just creating heartbreak and torture for these guys. Don’t take away lives like Noah’s and Apollo’s for something so unfruitful. You’re wasting a lot of time. You need to move on!”

“You’re so twisted,” She whispered as she saw the excitement flash across his eyes.

“Alright, you’re going home and when you get there, a surprise will be waiting for you.” With that, Mason’s room began to materialize around him and what he saw made him jump. Loud shrieks could be heard coming from the baby on the floor in front of Mason. It was a girl wrapped in a pink blanket. “What the?”

“Take care of her, maybe being a parent will change your mind!” The ghost exclaimed.

“Damnit,” Mason cursed. “How did you even get this child!?”

“Everything will reveal itself as time progresses, do your best in raising her Mason.” 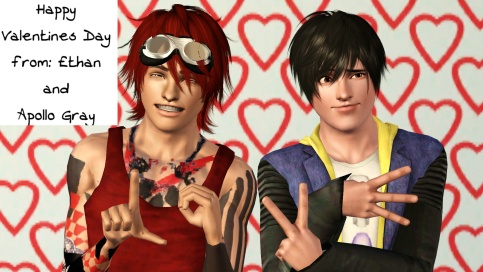