Sorry for the delay! 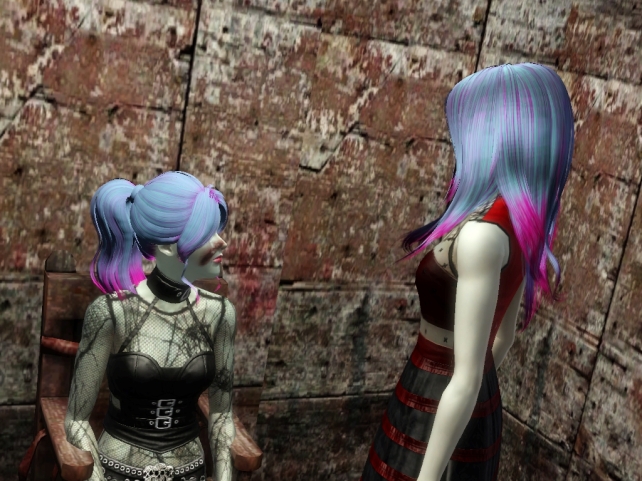 The door creaked open slowly. It took everything in Charlotte to look up from her spot on the cold floor. “Ade?”

“Guess again, halfblood.” Aria’s smirk was sinister. “You look well, too well.” She leaned by Charlotte’s crumbled body and forcefully dragged her up. Charlotte was too weak to fight it. Each movement caused pain to shoot through her head. She needed blood. Aria shoved Charlotte into the chair and locked the arm bars over them.

“What are you doing?” Charlotte choked.

“Years ago,” Aria began. “This room was used as a room of sacrifice to the vampiric gods. Soon, those sacrficies will be made to me. You’ll be a part of that. How does that make you feel?”

Cold. She was so cold. Charlotte shivered as she tried to formulate her words. “You’re sick…”

“Sick? It’s rude to call a goddess that.” She turned from the chair. “You won’t be getting any blood, but once Altiere gives me the okay, I’m going to be taking yours. Yours as well as hundreds of other pathetic half bloods will be used to fill our food bank!” She let out a wild laugh. “It was all too easy.” 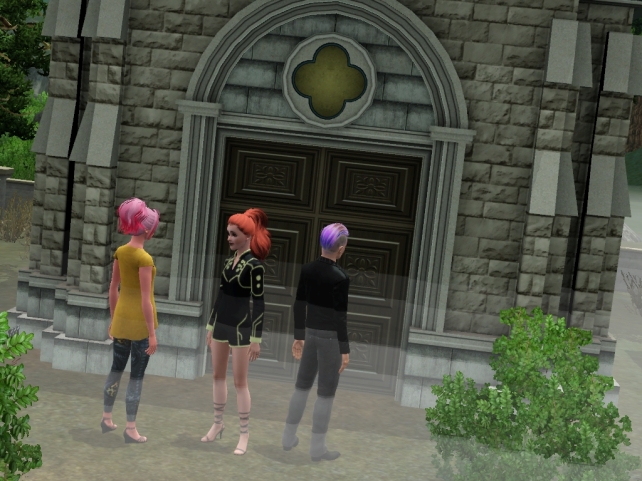 “This is the place?” Jeff asked.

Lorie nodded. “I feel my sister’s presence. She’s definitely in that building.”

“We’ll go in there and I’ll distract Cora. Hopefully, those vampires are preoccupied, then you two can sneak in and find the girls. No matter what, stick together, okay? I promised Alistair that you’d all come out in one piece.”

“Pay attention to me.” She grabbed Jeff’s arm as he started walking towards the door. “You can’t just walk off.”

“I need to save her,” Jeff said simply. “Charlotte is in there and she could be in trouble.”

“Fact of the matter is, you and I are both humans. I don’t doubt our intelligence, but we do not have the same strength that a vampire does. Especially not Altiere and Aria. What we’re going to do is simply get the girls out. No heroics, no rushing into battle. You will die, and….” She looked at Millie. “I can tell that the Gray girls like you a lot, I wouldn’t be surprised if more than one threw themselves in front of an attack meant for you. So, don’t do anything stupid.”

Jeff balled his hands into fists. She was right, but he was so used to being the one to rush into things as the hero. He was the police officer, but here that didn’t matter. The playing field was not leveled. “I won’t do anything stupid.”

Operation “Save the Gray Sisters” was in full effect. Lorie walked into the building first, a slow lead on both Millie and Jeff. “Mom!”

The diversion was perfect, and Cora looked up in shock. “Lorie…is that really you? My baby?”

“It’s me.” Lorie nodded. She had to buy as much time as possible for the others to sneak in without being spotted. “I want my sister back.”

“You can have her back, you just need to come with me,” Cora said. “We can live together like it was meant to be. You, me and your sister.”

“And dad?” Lorie was a good actress. She knew just what to say to get Cora to elicit a further conversation. She had been watching the woman with her father. Emit, she reasoned, was the right one in the situation. He was misguided, but he was trying to make things right. He had loved Cora..no. She knew that he still loved her, and watching her fall so far into the darkness killed him inside. All while he was playing guardian of time. He would never admit it, but she knew he regretted ever falling in love with her mother. He wouldn’t have daughters or anyone else to worry about. Just time.

“No…not dad.” She hadn’t exploded like Lorie expected, and she wondered if the woman was playing a game. “Never dad. He was never there, he never came back, or even told us why he was leaving. I mean, time? Why was that more important than us? I always think that there could have been another way, if he just stopped to think about it-”  She paused, looking away. “I’m ranting now. It doesn’t matter anymore, I suppose.”

“It does matter. Mom, don’t you think that there’s another way now? Listen to yourself, if you just think things through like you wished that dad did-”

“No.” Cora lifted her hands in anger. “I did think things through. For years and years and years. I have had nothing but time to think about other ways. I want my family back, and this is the only way.”

“Good,” Cora said simply. “Then everything I have given up will be worth while.”

“What are you saying?” Lorie demanded. “I know we don’t know the new Grays too much, but family is still family!” Then she realized what was happening. “You’re trying to spite dad. Ruining his plans with the guardians.”

“The guardians are a worthless organization that can’t do anything to save the future. They can try all they like. Emit can try all he likes. But time is something not worth fixing. He can manipulate it all he wants but it willl always turn to shit, because of people like him.”

“You’re not making any sense,” Lorie argued. “He is watching over time, making sure that things not supposed to happen don’t happen. People like you, are the ones destroying the future. You say that the world is terrible because of people like him, but you’re not any better. You’re deliberately killing off generations of a family to spite him!”

“You know nothing,” Cora spat. “You were never truly in love. You don’t know what it feels like to have your heart ripped out of your chest and stomped on!”

“He was trying to protect you by leaving!” Lorie shouted back, heatedly. “He is always watching you, because he loves you! But, ypu’re too far gone ot see any of that. If you were a good mother, you’d never have given us up in the first place.” Her mother wasn’t making any sense. She was talking in circles, contradicting herself! What was she trying to gain? 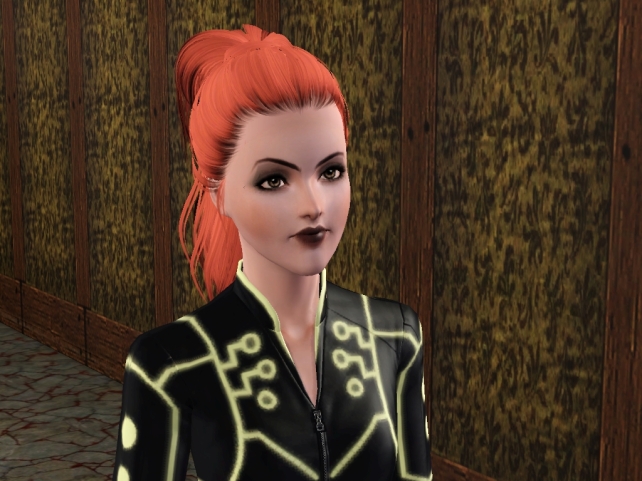 “If you really wanted us, why did you give us up in the first place?” Lorie demanded.

“You don’t understand, it was what I had to do. I was angry. Every time I saw that blue hair on your sister it made me sick to my stomach. But…as the years went by, I realized how lonely things were. I wanted to see you again, so I talked to Apollo and he wouldn’t let me near my own daughter!”

“I told Apollo that he was my grandson. Did he help me to reunite with you guys?” Cora demanded. “No. He was ungrateful!”

“He was protecting his mother from you!” Lorie boomed, remembering the part of the timeline she had seen. “You had lied and put Leia in a place she never wanted to be in. She hated you! She grew up in constant fear, because of you!”

Lorie took a step back. “Forget it. You’re so warped that you think you’re right in all of this. How could you have gotten so bad?”

“Bad? I see a deliciously smart woman in front of me,” Alitiere said.

Lorie turned to face the vampire. “You need to stop talking. Your entire plan is bogus. Do you realize how many people that you’re angering by doing this?”

“Angering?” Altiere let out a small laugh. “I could care less. Soon, I’ll be powerful enough to crush whoever tries to stop me.”

“Lorie,” Altiere began, lifting his hand to silence Cora’s protests. “We tried to bring you back to life first. You should have been the one to lead with your mother, not the other one.”

“That other one is my sister, and I have given up too much in my life to let you stomp on her!” Lorie shouted. “She is all I have ever had in my life, because my so called mother and father both left. Can’t you just leave us alone? Leave my family alone?” Lorie reached for Altiere and grabbed him by the shirt. “You will not get away with this.” 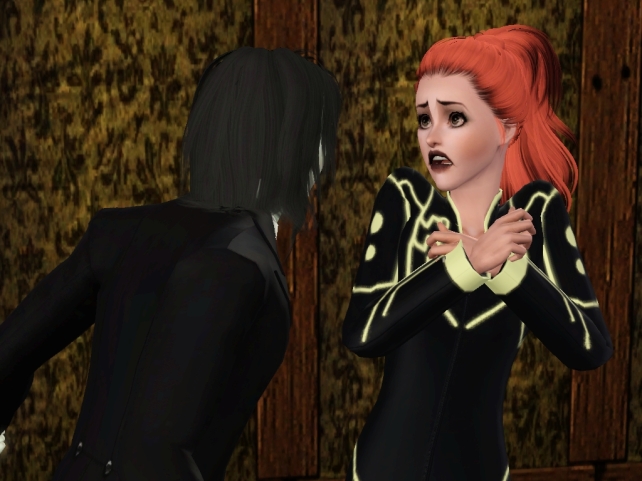 “I won’t get away with this?” Altiere pushed Lorie against the wall. “You’re a pathetic little human, coming into my lair and demanding things? I let you talk to your mother for her sake because my wife has grown attached to the poor wretch.”

“My daughter,” Cora choked out. “Please, do not hurt her.”

“Now you want me to spare her?” Altiere asked.

“She’s my daughter,” Cora repeated. “Just as Adeline is yours.”

“That is true.” Altiere released Lorie. “But unless she goes with you, she’ll die anyhow. We can’t have her or her time traveling father trying to stop us any longer.”

Lorie nodded. “I’ll come with you, but first-” She stopped talking and kneed Altiere in the gut. It was a dumb move, but she couldn’t buy anymore time. She hoped that Jeff and Millie were alright. 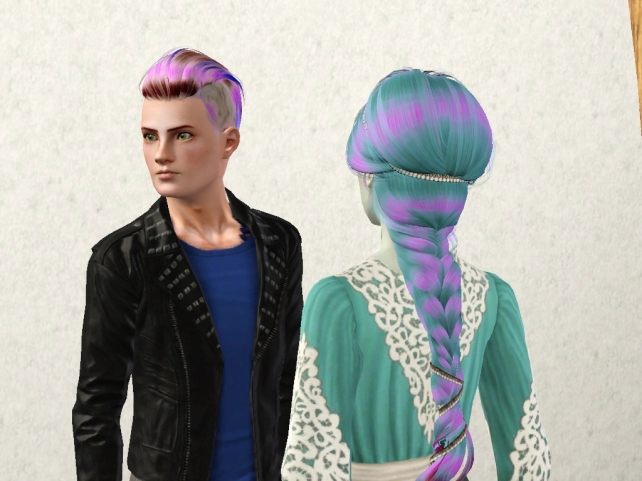 “Damnit!” Jeff let out a small grunt. “Was that Lorie?”

He and Millie were able to use the distraction to find Adeline and Leia, now it was time to make the big escape. “Lorie?” Adeline shut her eyes. “My power is still weak. I cannot sense anything. I’ve used all of my power assuring that my sister was alright.”

“Is she?” Jeff asked. “Is Charlotte alright?”

Adeline nodded weakly. “She’s in a room just a little bit away from us.But her power source is depleted. Last I checked, Aria was with her. I don’t know anything else.”

“We have to save her,” Jeff breathed.

“I want to save my sister just as much as you do,” Millie said. “But what about Lorie? We can’t leave her! She brought us here, and she’s our link to that time traveler!”

Adeline was too weak to argue, and before Millie could protest, he had already dragged the purebred vampire out of the pure white room.

Millie let out a small sigh. “Damn it.”

“What was that about?” Leia asked quietly.

“And this Lorie person…” Leia’s voice trailed off.

“That’s your twin sister,” Millie said. “She’s here to save you. You can’t stop a twin.”

“Yeah.” Millie nodded. “We have to make sure that she is alright.” Millie outstretched her hand and Leia took it. “It’s going to be dangerous by stay by my side, okay? We will make it out of here with your sister and mine.”