“The reason you’re all gathered here today,” Millie began. “Is because Zander and I have some really big news, and I’m o ecstatic that you’re here to share this with us, Astra.”

“Glad the rest of us are important,” Dionysus called out.

“Speak for yourself,” Alistair said. “I’m her father, I’m the most important.”

“Sir,” Burke began. “Should you be edging Dionysus on? He’s enough of an attention whore as it is.”

“Burke, you’re so mean to me.” Dionysus frowned, only shifting his face to a smile when Astra glanced at him.

“Do you want to hear the news or not?” Zander asked impatiently.

“Will you just say it already before I do?” Adeline asked.

Millie sighed. “Jeez, tough crowd. Fine. Zander and I are engaged!” She held her hand out to show everyone the huge ring. “Isn’t it beautiful?”

“Congratulations!” Astra said excitedly. Or, at leas she tried to. She couldn’t wrap her head around this entire sitaution. Millie was twenty one years old. How could she possibly know this guy was the one? She hadn’t even known her sister was into Zander. Everyone had thought that Charlotte and Zander would be the two to get together.

“Your fake happy voice is terrible,” Dionysus whispered to Astra. She frowned and looked at him. He shrugged. “What? I’m trying to help you out here.”

“Astra, will you be my maid of honor?” Millie asked.

“M-e?” She asked. “But I-I haven’t bee-n here for a while.” Astra tried not to stutter with her sister, but the situation was so foreign. The people so foreign. There were new faces, her family was expanding. She didn’t know how to be okay with that, especially since she noticed a much different aura about her sisters.

“You’re my twin,” Millie said. “You could be gone for fifty years. I’d still choose you.”

How could she be back, and still feel like she had lost everything? 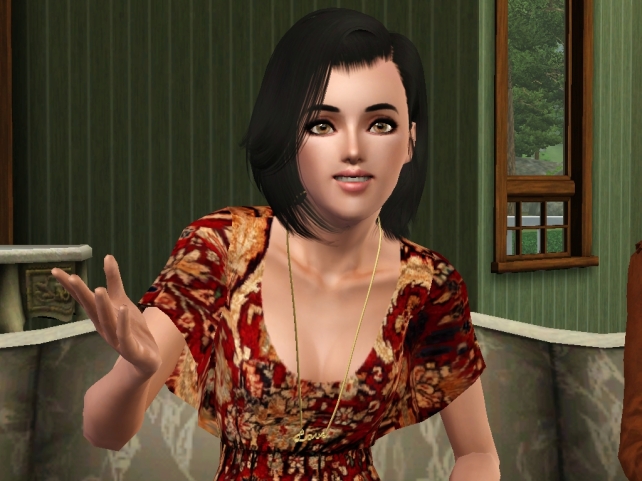 “Are you going to tell Charlotte?” Astra put on a fake smile once again. She could feel Dionysus’ gaze on her, and she wondered why the hell he cared so much if she faked her emotions.

“Of course! I live with her now, so I’ll have to break the news that I’m moving out,” Millie said.

“You realize that I will be third wheeling,” Adeline said.

“She doesn’t know Jeff,” Alistair said carefully. He looked at his daughter. “He’s a really nice guy. Your sister adores him. But, maybe you shouldn’t move in without meeting the guy first.”

Astra silently thanked her dad for the quick save. “Can I stay here?” She didn’t want to meet Jeff, whoever he was. Even if he was nice, she didn’t want to see her sisters happy while she was lonely. Twice. Twice she had been rejected, yet her sisters found men who had loved them. What was wrong with her? What did she do wrong? Why couldn’t Thad ignore the age difference? Why had Audric tossed her aside? She stood up suddenly, feeling the tears well up in her eyes. She began to walk to the kitchen, and sat in the same spot she had before, contemplating life, while fighting the tears. 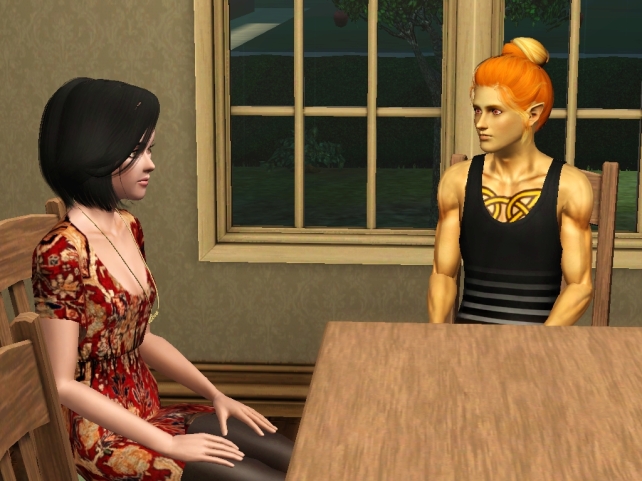 “Are we going to do this every time?” Dionysus asked, sitting in the same spot he had before. She refused to look at him. “You know, I’m just trying to be your friend. You don’t have to push me away.”

“You could, but you’d have to stop running away, and giving me the cold shoulder. You’re giving off a really bad first impression.”

She was glaring at him again. She had known him for a few hours, and already, she hated his presence. She stood up to walk away when he grabbed her arm. She violently pulled it out of his grasp and stood back, irate. “Do-n’t touch m-e!”

“Sorry.” He held his hands up in defense. Something was…something was telling him that he needed to talk to her, get to know her. He didn’t know what. Maybe it was because she had reminded him so much of her sister. Trying to hide from something. “I didn’t mean to. I don’t know what came over me. I just didn’t want you to leave.”

She shook her head at him. No. That wasn’t okay with her. Dionysus watched her subtle movements. She was biting her lips, her eyes were downcast and her hand lay clasped on her wrist. She was dismissing him. He stood up this time. A few hours with Charlotte and they had been making out. A few hours with Astra, and he was literally excusing himself from the situation. She required a steady hand, he realized. He didn’t know why, but he wanted to see her again, even if it was just a scowl on her adorable face.

“Dad?” Adeline asked. “Can we talk about something, in private?”

He nodded, excusing himself from Millie, Zander and Burke. “Yes sweetheart, what is it?”

“It’s a lot of things, but for now I want to talk about a book,”Adeline said. “Alistair told me one time about a book that could tell the future.”

Alistair sighed, running his hand through his hair. “Telling the future isn’t exactly the right words I would use. It was more like it told a story that strangely matched mine.”

“But the last pages were missing,” She concluded. “Like the seers…”

“Seers,” She said. “My friend Erik was telling me about them. They could see what would happen in the future. There shouldn’t be any in existence, but they left books behind. But each time the endings were ripped out to prevent anyone from becoming too powerful.”

“You think that’s what happened?” Alistair thought for a moment. “It could be, but maybe the ancient people were on to something when they erased the easy path to the future for us.” 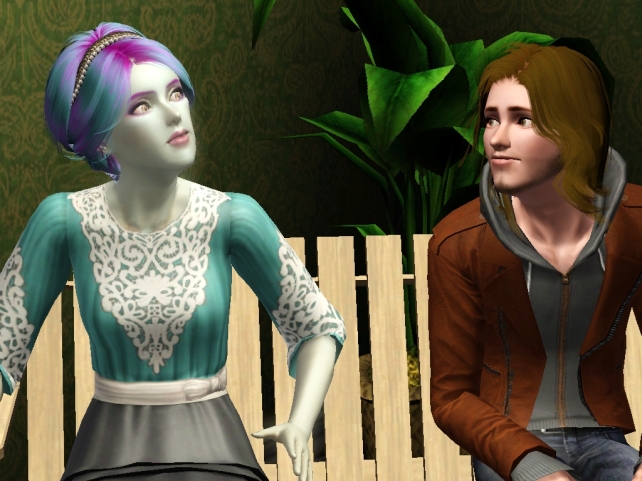 “I’m not suggesting we try to predict the future,” Adeline said. “We have enough trouble with time already. This guy, Erik, he thinks he can find out more about the seers if he had more evidence. The texts he has are in a defunct language, he can’t translate them fully.”

“And you want to help this boy?” AListair raised his brow.

“He is brilliant,” Adeline admitted. “I believe he can help us in this war. Truly, I do.”

“Okay, set up a meeting with him. But, it cannot be until after Millie’s weeding. I understand it’s important, but I need time. I hope you understand.”

“Of course daddy.” She kissed his cheek and stood up. “I’ll tell him right away. He’s waiting for me. Maybe he can do more reseacrh while we wait.”

“Any information to help stop this war would be a help.” Alistair stood up as well. “I’m going to talk to Burke and let him know he can go home for the day.” Burke was a new guy in town, and Alistair had hired him to be his assistant. Burke wasn’t a mage, rather he tried to hide his occult status. Alistair didn’t push him, but he had an idea of what the man was hiding. He did extensive background searches on Burke, and found nothing about his past life. At all. Still, the man needed a job and when Alistair had offered his help to Jeff, it hadn’t disappointed. Alistair was careful not to give away any important information about the war. But, it was nice having the red haired male by his side. Otherwise, it got lonely. His girls had moved out, and the only contact with the outside world he had was strictly business. 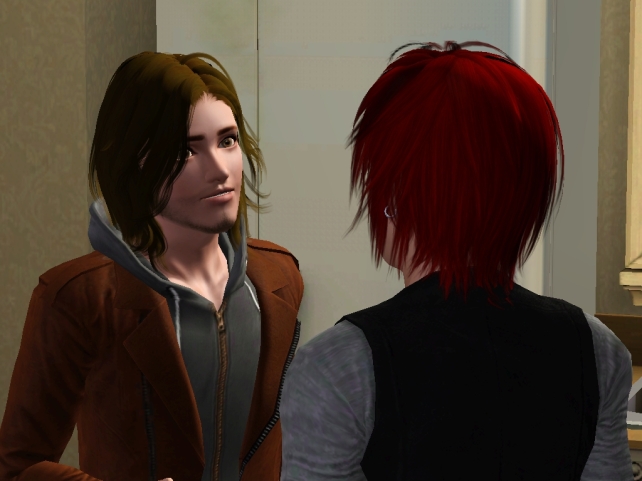 Alistair chuckled. “Stop being so formal. It makes me feel ancient.”

“How old are you anyway?” Burke asked, easing up his tone.

“Old enough to be your father,” Alistair said.

“You don’t look like you’re older than me by much,” Burke said. “I wish I had those youth potions.”

“No, you don’t.” Alistair shook his head. “It’s kind of strange looking only a few years older than your daughters.”

Burke laughed. “I could see how that would be weird. But, you must get all the babes.”

“Not interested in babes any longer, or studs for that matter. The last few times I did romance, they didn’t seem to work out too well.” AListair stretched his arms above his head.

Burke covered his mouth. “I’m sorry. I’m being insensitive. I forgot about Declan. I’m a jerk. I’m sorry. Don’t allow me to say anything anymore.”

“Relax.” Alistair laughed. “Its been a few years, I can’t dwell on my past forever.”

“You should move on,” Burke said. “Find someone else, wouldn’t that make you feel better?”

“Look around you,” Alistair said. “This war, can I afford to drag someone else into this mess? I don’t know who is out to hurt me or my daughters and working for Altiere. It’s not a risk I’m willing to take.”

“Right, sorry.” Burke shook his hair to cover the embarrassment on his face. “It’s hard for me to grasp the severity of this whole thing. I think I’m a little self absorbed.”

Alistair shook his head, but smiled. “Only a little.”

“It was insulting my hair, we all know I have nice hair!” Burke laughed.

“Yeah, I agree, the mirror was being a little hard on you. The red locks are nice.” Alistair resisted the urge to reach out and touch it. Burke was peculiar. But, was anything normal in Moonlight Falls? “Anyway, I have some work to head back to. I should be going.”

“One day,” Burke said. “I’ll take you out for drinks or something. Get your mind off everything.”

“I’d appreciate that, thanks.” 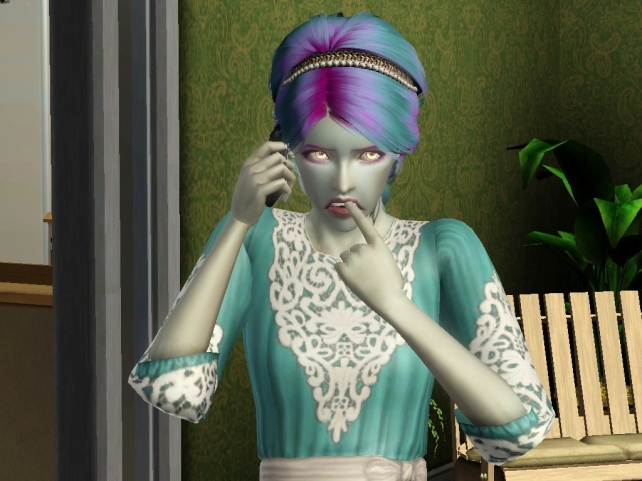 Adeline bit her lip hearing Erik’s voice on the other line. She didn’t know why she had felt so nervous calling him. She was never nervous. “That’s good news!” His excited voice calmed her. “I’ll do as much research as I can then.”

Adeline had known Erik for a few months. They hadn’t talked much, but they had a peaceful coexistence and understanding in the library. Often times, she’d stay later in the library when she knew he had a late shift. Or, she’d take longer to get through a book because she was daydreaming about him, coming over and asking her something trivial that she knew the answer to. The amount of space he had taken up in her brain recently made her feel vulnerable, something she hadn’t felt since Declan had left her life.

“Uh, how do you feel about weddings?” She didn’t know why she had brought it up, but she found herself asking him anyway.

“My sister is getting married soon, and I’ll need someone t accompany me. If uh, you’d like to that is. You can meet my dad and uh talk about the book and things.” She added that last part quickly.

“Yeah, that sounds fun. Just tell me when, I’m up for anything.” With that the two hung up and Adeline placed a hand over her still beating heart. It wouldn’t be for a few more months, and maybe that was just the amount of time she needed to mentally prepare herself for that night.