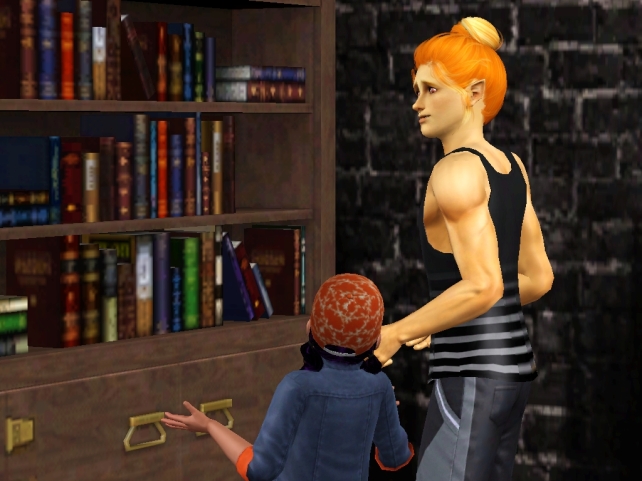 “What are we looking for again?” Camilla looked up at Dionysus. “This is impossible, it’s like we’ll never get out of this creepy place.”

“Yeah obviously.” She scowled. “But what kind of book?”

“It’s something really important to me. I’ll know it when I see it.” He laid a hand on her shoulder. “No sign of your parents yet?”

“I told you they’re dead,” She said coldly. “Stop asking about it.”

“You don’t know that for sure…” His voice trailed off as he watched Camilla dig through her jacket pocket.

“I found this amulet in one of the rooms. It belonged to my mother. She’s dead, okay? Are you satisfied?”

Dionysus’ frown never left his face. “Am I supposed to be? Because, I’m not.”

“It’s whatever. Can you just look for the book already so we can leave?”

“Looking for a book?” Dionysus turned to face the man.

“Mason. Mason Moon. Pleasure to meet your acquaintance.” He extended his right hand.
Dionysus placed an arm in front of Camilla protectively. “Listen, I know that you think I don’t know who you are, but I do. So back off, Moon. I have no business with you.”

“Oh, I know.” He smiled gleefully. “Just wanted to congratulate you on becoming a father.”

“On what?” Dionysus raised a brow. “Care to say that again?”

Mason smirked. Listening in on Audric’s conversations would really help him out in the long run. That man needed to be more careful with how he conducted his meetings. When it came to Astra, he was particularly careless. “Oh, I suppose it’s too early to tell just yet. But Astra Gray, she’s pregnant. I believe she lost her virginity to you, so…”

Camilla seemed to tense, but it wasn’t at Mason’s words. She shifted into her cat form and bolted towards the back of the castle. Mason chuckled. “You should go after her. If you don’t believe me, well, just wait a few months.”

“Damn it…” Dionysus cursed under his breath. He looked to Mason, and then to the area that Camilla ran off into. He had to go after her. Mason Moon was a manipulator, he wouldn’t waste any more time on him. But what if it was all true? 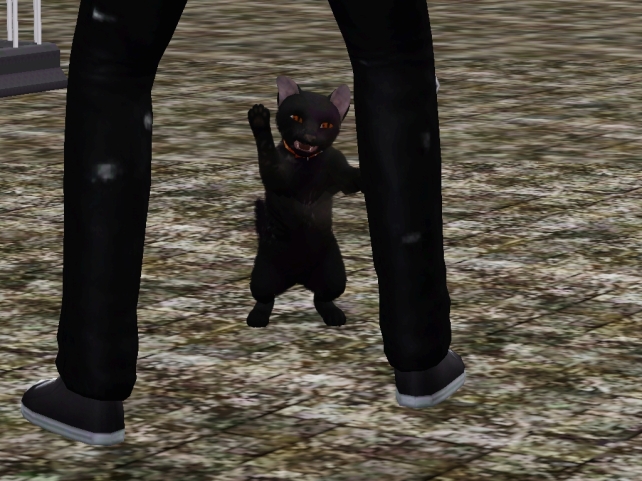 A loud shout could be heard in the distance. Dionysus ran towards it. He hoped that Camilla was okay.
“Is that you, Camilla?” Astra asked in shock.

Declan jumped backwards as the black cat viciously tore at his legs. “You disgusting little monster!” He lifted his leg to kick her away from him, but before he could a swift bolt of energy had knocked Declan out clean. Just like that. It was too powerful of a move…could it have really been over that quickly?

“Camilla, are you all right?” Dionysus scooped the cat into his arms. “You promised me you wouldn’t do anything reckless. I didn’t want to have to use my powers.” The cat simply purred and rubbed up against Dionysus. “What am I going to do with you?”

“Dio…?” Her voice rattled him from his trance and Dionysus turned around. The person of the hour. Astra Gray.

“What are you doing here?” He asked. Couldn’t she just leave him to his solace? Did she have to be here to? His eyes darted to her stomach. it was impossible to tell, it had only been a few days…it couldn’t be. Could it?

“Rescuing my niece, she uh…” Astra turned around suddenly as if she had forgotten something very important. “Right! Okay!” She readied her wand and within minutes was able to break the lock. She didn’t bother turning around. “Audric taught me that.”

“Well, of course he did.” Dionysus rolled his eyes. “Great catching up with you, but I really need to leave now. There is a book that I want and- Damn it Camilla!” The black cat had jumped out of his arms and dashed through another hallway.

“Dio!” He tensed at the voice. It wasn’t Astra, but her sister. He wondered who was scarier of the two. He wouldn’t want to take Charlotte on in a fight, but Astra could really mess with one’s emotions… “What are you doing here?”

“It’s nothing you need to worry about. Your daughter is in the next room, Astra used a spell to break the lock on the cage and-”

“Woah, slow down,” Charlotte said. “I really need to hear exactly what happened.”

“There is no time,” Dionysus said firmly. “I have to go.”

“Where?” Charlotte demanded. “At one point in time you would have given everything up for me, you know.”

“That was then,” Dionysus let out a sigh. He absentmindedly played with the hem of his pants. That was a long long time ago. Before she had chosen Jeff, he would have given her the world. Maybe that was his fault, falling too deeply in love, too quickly. She had seen him as a simple flirt, but he was so much more.

“That was before Astra, you mean?” She was angry, he could tell by her eyes. “Because all of a sudden, you stopped showing your face around my family. I know it’s not because of Declan.”

“Listen lady, can you stop bugging us? We need to leave now, like Dio said.” All eyes landed on the girl.

“I am so sorry darling, I had no idea he had a nice girl waiting for him.”

Dionysus was shocked at Charlotte’s kind response. Maybe being a mother had really changed her. He saw the accusatory eyes that fell on him though. She wasn’t happy with the situation. He thought about exclaiming the common phrase, “I can explain!” But would he? There was too much he needed to say and now wasn’t the right time. He wondered if any time would be. “Camilla, this is Pax’s mother. You should show her some respect.”

She lowered her eyes at Charlotte. “You created that dork?”

“That dork that you haven’t stopped talking abut since you met him,” Dio teased her. His whole demeanor had changed.

“Nuh-uh.” Camilla shook her head. “You started the conversation every time.”

“Because I just can’t believe that you shared your ice cream with someone.” Dio let out a small laugh. “Now, I see you found my book.”

“I knew this was it.” She nodded enthusiastically. “It’s so shiny.”

My daughter, Dio. Focus, where is my-” Charlotte felt something clamp onto her leg.

“Oh, thank the watcher Gracie!” Charlotte pulled her daughter into a tight hug. “Did Declan hurt you?” 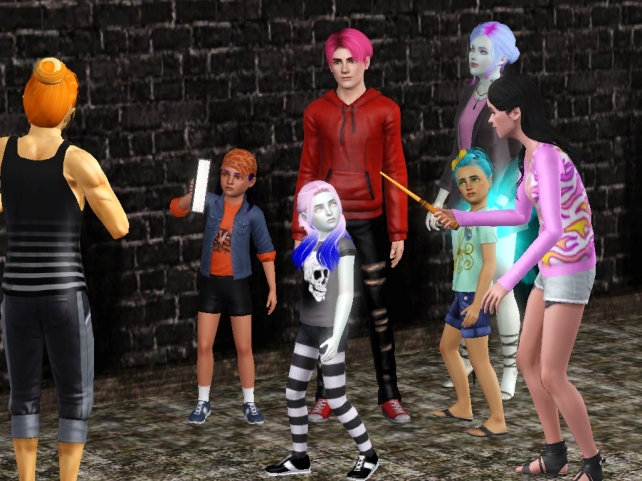 “No.” She shook her head. “We were okay. This guy over here said he wouldn’t let anyone touch us.” She pointed to the pink haired male.

Charlotte’s breath caught in her throat. He felt so familiar, who was he? “Pax,” She mumbled.

“That’s what I said,” Graciela agreed. “The pink hair. He is related to us somehow. You can work out the details on your own.”

“Can we do that at home maybe? I don’t like this place at all.” Astra was still holding her wand. Charlotte frowned. Neither Dionysus nor Astra wanted to acknowledge the other. Astra had come clean about that night, and Charlotte was not too thrilled about it. But seeing how dismissive Dio was being…Astra was probably the reason.

“Your parents are worried sick about you,” Charlotte said. “How did this happen?”

“I uh…went to go give Graciela some supplies and this vampire caught me. I was just trying to help. Normally I can use my powers to hide from sight, but only for a little. I forgot that vampires can see better in the dark.”

“Totally awesome,” Caleb agreed. “You kept a cool head in there.”

“Maybe this conversation will be better suited at your place,” Dionysus mumbled suddenly. There was no arguing with him when he was in a state like that. Charlotte hated it. But there was no choice. The Gray household it was. 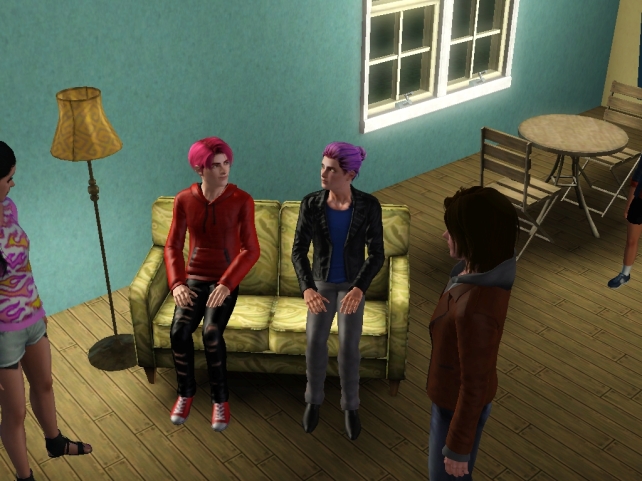 “Explain this to me again?” Jeff asked, pretending he had never met Caleb before. He had to ease Charlotte into the idea. It wasn’t so much that he thought it would be a problem to Charlotte, but it was the lying she’d hate. Especially since Charlotte had been so open with him.

“It’s in the book, I had to memorize that story.” Alistair rolled his eyes. “I should probably let the girls read it. It’s our entire family history starting with Athena Gray.”

“I heard she was incredible,” Alistair said. He blinked and then laughed. “Why does this even shock me? What would you be doing here at all? Risen from the dead? No offense, but you weren’t really in on most of the family’s heavy drama. You lived a pretty normal life, and made a ton of money.”

“What do you mean?” Astra asked.

“He was a famous singer in his time. Everyone knew who he was. That’s what the memoir said. I’ll have to find it for you. Xerxes gave it to me when he wanted me to work with the guardians to take down Damian. That was a while ago…”

“That’s not good enough.” He turned to see his father waving him into the next room. “Ok, Astra come with me. I think they’re going to want to hear the story again.” She only shrugged. Of course they would, because it was so hard to believe that she could do something like this. Why did they doubt her so much? “Caleb, Jeff will make you feel right at home. I know it’s not much, but it’s all we got for now.”

“Thank you sir.” Caleb nodded. “It’s great to meet you, and I would love to get brought to speed when you have the time.””

“And then Damian turned into a big dragon!” Camilla exclaimed. “Picture a cat versus a dragon.”

“What happened next?” Pax asked.

“I fought him off by myself, duh. What else do you think?” Camilla asked.

“I would have heard a dragon,” Graciela argued.

“No, Damian was a silent dragon. It was this whole thing. You were distracted by that Declan dude.”

“I hated him.” Graciela shuddered at the thought. He was so cold and cruel. He reminded her of the monsters.

“I’m glad that you’re both safe,” Pax answered. “But you’re too cool Camilla. I want to know how a cat could beat a dragon.”

“Yeah right.” Graciela shook her head. She stood up. “I’m not going to listen to this anymore. You’re a bad liar.” 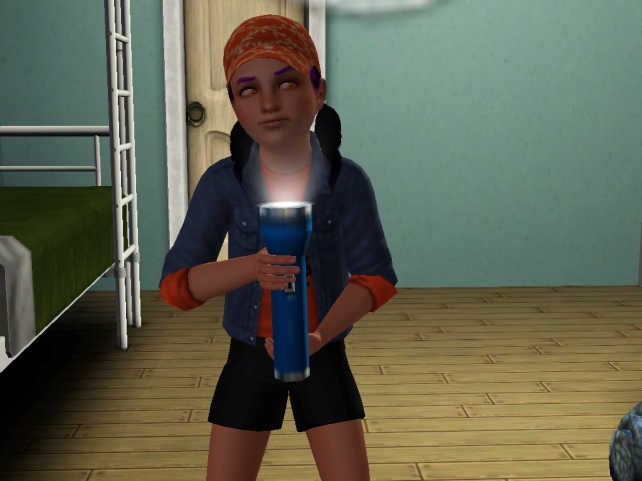 Camilla didn’t seem the least bit bothered. “Go ahead and leave. You’ll miss the best part of the story.”

“Whatever.” Graciela waved them off and left the room.

“I’d like to hear what happens next, even if it isn’t the truth,” Pax said. “You’re a good story teller.”

“Stop being so nice to me,” Camilla demanded. “I’m lying just like your sister said.”

Pax shrugged. “It doesn’t matter to me, because I’m having fun listening to you.”

“Fun? No, trust is more important than fun,” Camilla said. “You have to trust me first. You barely know me.”

“Just a story? It’s just a story now, but what about next time? Maybe it’s me lying about something you don’t like,” She replied.

“I just hope then, that you will lie because you want to protect me.” He looked at her seriously. She groaned and dropped to the floor next to him. Why couldn’t he just hate her so she could move on with Dio and not care if she ever saw him again?