Alistair had wanted to wipe that smug grin off of Declan’s face. Had he made a mistake by giving in to the man’s touch? “I…”

“Save the love letter for later, dear. We’ve spent too much time here. Your father will be home any moment and will not approve.”

I don’t approve, is what Alistair had wanted to say back. But he did want it. It’s why he had given in to the man in the first place. “You didn’t tell me everything.” He hadn’t told him anything, other than that it was time. Time for what? Alistair groaned, angry at himself for letting Declan distract him with kisses and, er…other stuff. What the hell did Declan know that he wasn’t telling him?

“We’re still enemies, love,” He responded with a cool smile. He stood from the bed and slid his clothes back on ever so slowly, teasing the man. “Lovers and enemies.”

“You don’t have to do this,” Alistair breathed. “I can help you with whatever it is. We were supposed to be a team, remember? Damn it, Declan, we’re still married.”

The pink haired man looked deep in thought for a moment. “I suppose you’re right. We are still lawfully wedded. What do you suppose we do about that? I guess we can discuss it another time.”

“You can’t just leave,” Alistair said. He himself stood up and began to dress. What just happened? His head was pounding and those fleeting moments of passion left him feeling more lonely than anything. So what now? Did he just become Declan’s side piece, or did he fight his desires and reclaim Moonlight Falls? Perhaps he could do both, or neither. Maybe the answer was in turning a new leaf and returning to wherever his family dwelled.

“Alistair?” That was his father’s voice.  He had spent too much time with Declan.

“Looks like that’s my cue.” Declan smirked at Alistair. “We should do that again some time.”

“To hell you should,” Ethan said from the doorway, his eyes lowered and fixated on the menacing King.

“Do you have any manners? You should knock first.” Declan crossed his arms over his chest. “I am your King.”

“What’s a King doing in my house?” Ethan demanded, not looking at his son. He wanted to hear it from Declan himself.

“Sleeping with your son. What else?” That smug grin again… Alistair wanted to crawl under the covers and pull them over his head. “Why do they call it sleeping? We weren’t doing any of that.”

“Alistair,” Ethan said calmly. “You’re an adult and can handle your own mess. But, I will be outside this door if you need me.” Begrudgingly he left his son’s room. 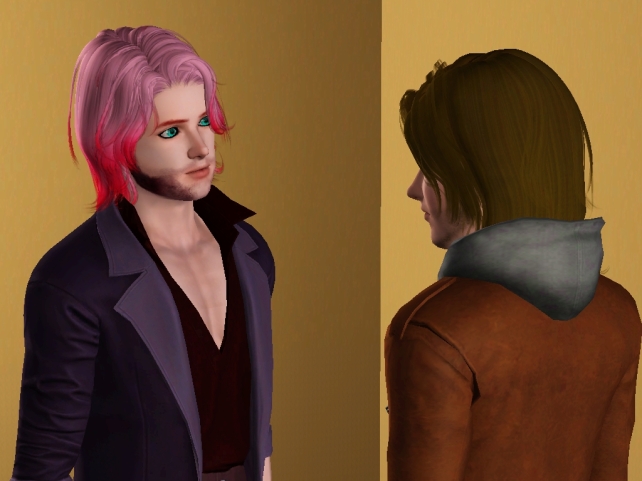 “Wow, didn’t know you were a child,” Declan told Alistair. “I thought the Keeper himself would be in charge. Not some dead guy.”

“What’s the rush?  He already knows that I’m here, so there’s no reason to leave now. We can talk. About all of those interesting things I mentioned before. You said something about a resistance?”

“This is not how this is going to work. You tell me things, but I’m not telling you anything. Still enemies, love,” He mocked.

“Point taken, love,” Declan held his hand out for Alistair to take. Alistair’s heart was beating so quickly. Why did he have to call him love? What did that mean to him? “Where should I start, hmm?”

A loud crash could be heard coming from the other room. And then a female’s voice. “Sorry. You won’t be needing that ugly vase anymore anyhow.”

Alistair looked to Declan who just shrugged,. He didn’t recognize the voice either. “Dad?”

“We’re here.” The woman waved him off, entering the room with Ethan in toe. “My name is Quinn, a colleague of Audric Brainard. You’re aware that he can’t interfere directly with this world, correct?”

“Why are you here?” Alistair asked. 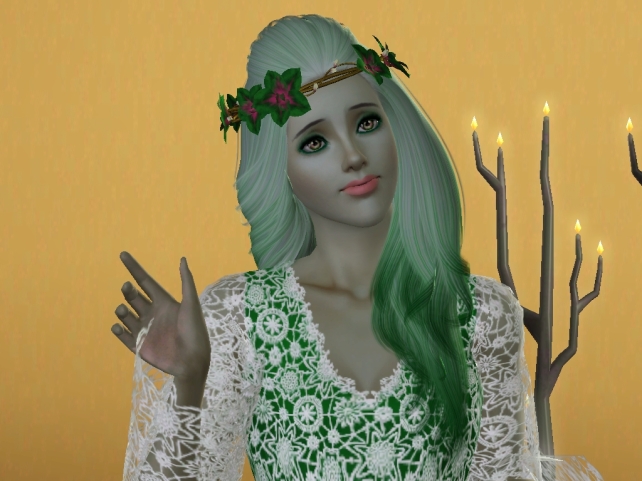 “Impatient, are we? Let me finish. Your sorry excuse for a dimension watcher is destroying this dimension with his idiotic decisions. His idiotic plans, are just that, idiotic. If I had a dollar for every time he suggested something stupid, I’d have a Haven as big as his. But, anywho,  you two need to come and see your daughter. She’s belligerent, and holding two very powerful babies in her stomach.

“Is it wise to be saying all of that in front of our enemy?” Ethan asked.

“Who? Pinky? I don’t know the inner workings of this dimension, I just know that the longer we stand here and talk, the longer the dimension is at risk of being attacked. Audric will only keep the seal open for a little while.” She rolled her eyes. “I shouldn’t even be involved with this, but if your dimension’s downfall didn’t mean the destruction of my own, I wouldn’t be here. That man owes me. There are things I need to do back at home as well.”

“You want Declan to leave Moonlight Falls?” Even Alistair knew that was a bad idea.

“Audric said both dads, and the grandfather. He spoils Astra, if you ask me. But, it’s his dimension.” She’d interrupt him if his actions were dangerous, but from his panicked tone, she was sure having the three of them in his Haven was urgent.

“Astra?” Declan whispered, his whole countenance changing. “Is she in danger?”

“Since when do you care about your daughters?” Ethan spat. Declan balled his hand into fists but didn’t say a word. “You drove them out. I haven’t seen my grand kids or great grand kids because of you. Don’t pretend like you care now.”

“Enough,” Quinn said. “You’re all wasting my time. This whole thing needs to be resolved.” She tapped her foot impatiently. After she zapped the boys to Audric’s Haven, he’d seal Moonlight Falls again and she’d head back to her dimension to check up on it. She didn’t like relying on the lavender haired male. Her dimension depended on the well being of his. And Audric didn’t have the best track record. She couldn’t be in every place at once. 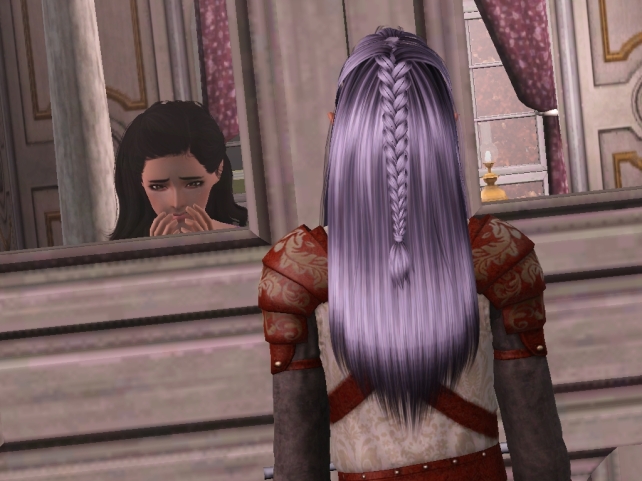 “Astra…” Audric pounded on the door. “You have to come out.”

“I didn’t tell you because I love you,” He responded. His heart was tearing apart. He wanted to crawl into his room and stay there forever. But this was the hand he was dealt, and he chose the wrong cards to play. “I needed this to happen, for the sake of the dimension.”

“You took this too far,” She exclaimed. “Way too far!”

“Sorry? Sorry isn’t going to cut it. Not this time. I make mistakes too but not like this.”

“We’re here!” Quinn announced cheerfully from behind the male. “Take your Grays and let me leave. I’ll be back when this is resolved. We still have much to discuss, and I think you know about what.”

Audric nodded solemnly. “Thank you, Quinn. I owe you one.”

“More than one,” She told him. “But I’ll be back.” She waved to Alistair, Declan and Ethan who stood looking confused. They had tried more than once to deny her, but after a few attempts she had gotten annoyed and zapped them all here without their consent. Because time was not on her side right now. She had to leave.

“Your daughter, she…” His voice trailed off at Alistair’s angry expression.

“What did you do to her?” Alistair demanded.

“Daddy?” Astra cried, opening the door at the sound of his voice. “It really is you!” She threw herself into his arms. “I’m sorry. I made a mistake. A big mistake. He ruined our lives!” She turned to see Ethan and Declan standing awkwardly by the Keeper’s side. “Dad?” She then launched herself into a very surprised Declan’s arms. He didn’t know what to do.

She sniffed. “No he’s not, daddy. He’s the way he is because of Audric. Because of that monster! Dad, tell them. Tell them what Audric made you do.”

Both Audric and Declan were frozen in fear. Or was it shock? “Monster is a harsh word, love,” Audric said.

“Don’t call me love,” She seethed. Alistair saw a mirror of him and Declan just earlier. “You are a monster. Tell him, dad.”

“Oh man,” Ethan said bitterly. “How did I not know you were involved in this? Wherever you go, trouble follows. Where are the others?” He turned to Astra.

“They kept telling me that Audric was bad. But I didn’t listen. So they left, and I’m here. Don’t worry, they’re all safe. I keep an eye on them sometimes from the observatory that Audric has set up.”

“Why don’t we all take a seat and I’ll pour us some wine?” Audric asked, dreading the long conversation that they were going to have.

“Absolutely not,” Alistair said. “You’ll tell us what’s going on NOW. I left my people to come here and I want answers.”

“Your people?” Declan asked. “What about mine?”

“The people who grovel at your feet for food rations? Are you serious?”

“Daddy,” Astra cut in. “Now is not the time. Dad has to tell you something and it needs to be now.”

“Tell me what?” Alistair asked, breath caught in his throat. Could it get much worse?

“I have nothing to say,” Declan responded.

“I gave him that power that he has, not Altiere,” Audric cut in. There was no use lying now. It was already out in the open for Astra and that’s who he really cared about not hurting. “I kidnapped your daughter when she was in her most vulnerable state and I kept her in isolation. Now, I didn’t hurt her but it was my intention to at first. I had said it was for her own good, but it was for my own selfish reason. I was blackmailing Declan to infiltrate Altiere’s base, if you will call it that. I had seen him taking notes already for the war effort, so it was the perfect time.”

Alistair felt like his heart would burst out of his chest. “Dad, tell me he didn’t just say all of that. I’m going to fucking kill him. Dad-”

Ethan rubbed his son’s back soothingly, anger blazing in his eyes as well. “We’ll get to you later, Declan. But why the hell would you do something like that Audric? You slimy little bastard. What is your job exactly?”

“I do whatever it takes to keep this dimension from collapsing. No matter what the cost,” He answered. “I thought that Alitiere was the reason this dimension was caving in and I needed an inside man that Alitere would allow in. The only person who could do that was Declan. If I had to hold his daughter’s safety above his head, then I’d do it. At least, that’s what I thought I needed to do. I met your grand daughter and she changed me. I can’t live without her. I don’t want to.”

“Cut the crap,” Alistair exploded. “Don’t you dare give me that! You don’t get to give the changed man speech. No, I’ve been alive a long time. Maybe not as long as you, but if you think you’re going to get me with that, you’re sadly mistaken.”

“It’s the truth, I don’t need you to believe me,” Audric responded. “Besides, when Astra was living with you in Moonlight Falls for ten years, Declan knew she was there. That was on him. I wasn’t holding anything over his head anymore.”

Alistair gasped, dropping to his knees. “Daddy?” Astra cried, running to his side.

“No…not now,” He mumbled, trying to catch his breath. “Not again.”