She was exhausted. Sleep had escaped her last night, as she lay awake gazing at the ceiling. She could hear her parents arguing in the next room. It was typical that they’d fight, sure. That was just their dynamic. But this time, she heard a crack in her dad’s voice and she knew he was upset. Her mother was crying. She had known that they’d wait until everyone was asleep to break down, but Gracie hardly slept anymore. The sunlight beat down on her skin, scorching it. She had fifteen more minutes, give or take, until her skin literally started scorching. It sucked being a vampire sometimes. She didn’t like lurking around at night. She’d much rather be sunbathing. But sunbathing would kill her.

Her mother didn’t want to let her go in search of the darkness, but Gracie had to go. It was calling to her and as much as it terrified her, if she didn’t confront it head on, she’d be tormented forever. Her dad didn’t want her to leave either, so then why were they fighting?

She scratched at her nail polish absentmindedly. She needed a new coat, but she didn’t have the patience to do it herself. Nerissa usually did her more intricate stylings but the girl was off at a party with Camilla, Pax and Harmony. She was invited too, the girl throwing the party was a classmate of hers. But, she didn’t want to spend her Saturday locked up in another house. She wanted to feel the wind on her skin. Besides, Gracie knew it was all a formality. She didn’t have any friends besides Camilla, Nerissa and that new guy she was dating. whatever his name was. She hated him. If only Leon were here. How many years had it been since he had gone? Would he even remember her if he came back? Was he ever coming back?

She still saw his parents often. When she’d walk around town more frequently, she’d bump into his father at the alchemist. He first introduced her to what he called vampiric sunscreen. It let vampires stay out in the sun for longer periods of time. Except, her mother swore against it. She didn’t like the stuff, said it wasn’t natural. And Graciela couldn’t afford it on her own. So, she ventured outside in quick bursts. Twenty minutes at a time until she felt her skin heating up. Then she had to head inside to cool off again.

She hated the buildings. There was darkness in every corner. She was a vampire. She was supposed to thrive in it. But she cried every time she heard those voices. Her thoughts drifted back to Leon. How the hell could someone leave so suddenly? His parents had said it was with good reason and he’d be back. But she had only seen him once since he had left. The distance didn’t change her, but it had changed him. He was more mature, and she was still a frightened girl. So, she hid the next time he came around so she wouldn’t embarrass herself, and the next time after that. Then, he just stopped coming altogether and she had nothing to look forward to. How could she look him in the face, a man with ideals and ambitions, hopes for changing the world, and her a big scaredy cat? She couldn’t even face him. Now, it was her turn to leave, and when he returned for good, rather, if he returned to Fortitude, she’d miss him. One in, one out. And she wouldn’t even get to say goodbye this time.

Leon smiled. Today was the day that he’d get to return home. Not for more than the weekend, but it was enough. He was tired of all of the books and sermons. If he had to hear someone else tell him about what he was supposed to know, he’d hit someone. This was all valuable, he knew, but most of the time he had wished he was back home in Fortitude. There was only one other girl here his age, but she was constantly getting him into trouble. Every time she wanted to do something reckless, she’d ask him to join in. Granted, it was probably his fault for not turning her down, but man it was so dull in the silent halls. He wanted to have fun, until that fun cost him even more time away from home. Every time he had gotten in trouble, it’d be more days of studying and chores added on. And he wanted to stop causing trouble, really he did, but Angelica was tempting. She made him do stupid stuff.
“Not today Angelica,” He mumbled to himself. She hated going home because she had family issues that she didn’t like talking about. He felt bad, but it made sense why she’d do things to get her more time here. And at times, he felt like getting into trouble too so that she wouldn’t be all alone while the others went home. But, not today. He was going to see Gracie if it was the last thing he did. She was mad at him, he thought. He didn’t know why. He could barely recall what he had said to her the last time he had saw her. Had it been a little over a year already? No. Two years. They had celebrated her sixteenth birthday together. He wouldn’t miss that for the world.

Now, at 18 years old he wondered why she avoided him. He remembered the first time she had refused to see him. He thought, maybe it had something to do with her fear of the darkness, so he let it go. But the second time? He watched her pace back and forth in her room. She hadn’t known he was watching, and he’d never tell her.

He wanted to ask her if she still held her half of their gift. He still wore his daily. It got him through the tough times. How did she look now? Was she still that adorable tan vampire? He chuckled at the thought of a tan vampire. He didn’t think they existed, but she had always spent so much time outside that her skin took that darker tint.

He shut his eyes and thought about all of the possibilities. Did she look more like her mother now that she was older? did her smile radiate a room like it did before? Was she still a dork who tried to pretend she wasn’t scared? He frowned. Just like a coin, his thoughts flipped. Was she afraid? How was she holding up? Did she finally outgrow the fear of darkness? Did she have someone who held her when she was too scared to get through the night, like he had when they were children? Did she forget about him and move onto to a best friend who could actually be there for her?

“If you don’t want to go back, stay here with me.” He looked up to see Angelica standing against the door to his room. He didn’t even hear her enter.

He shook his head. “Not today. I have to see her. Err…” He looked away, embarrassed, a tinge of disgust twisting on Angelica’s face. “My friend. I haven’t seen her in a while.” 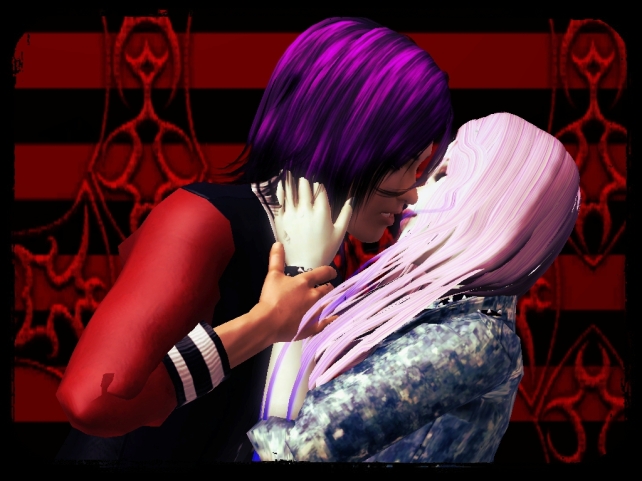 “Angelica, what are you doing here anyway?” He asked. “You should be on your way out, right? You said you were leaving early.”

“I want to come with you,” She murmured. “To your hometown.”

Leon shut his eyes tightly and thought about that moment he had planned out for months. When he’d finally see Gracie again. To say he had a crush on her was an understatement. He had liked her the moment he had laid eyes on her in that forest just outside Fortitude. The longer he spent away from her, the more he thought about her. That’s when he knew that he loved her. Even after she avoided him, he still wanted to see her. She was perfect.

He looked at Angelica. The girl who obviously showed an interest in him. He didn’t like her romantically. In fact, before she walked into the room, he was daydreaming about Graciela. Again. Except, this time she was in the room with him, purple lips and denim jacket.

“Hi.” She’d give him that shy smile of hers.

He’d smile back and ask, “how have you been? What are you doing here?”

“I came to see you. It hurt too much to be apart.” A dramatic answer, as she was accustomed to give. Then she’d reach her hand out to touch him. To make sure that he was real.

“I feel the same way. I miss you every day,” He’d tell her, sweeping her off her feet. He’d place his arm around her, and she’d melt into his touch. A warm kiss would be planted on her lips, and she’d kiss him back fervently as if she had been waiting for that moment for years.

“I love you,” She’d whisper. He’d feel her warm breath on his neck. “Can I stay here with you?”

“Really?” Angelica’s excited tone shook him from his daze.

“Huh?” He realized he uttered the word out loud and didn’t have the heart to crush the smiling girl.

“Thank you, thank you! I can’t wait to meet all your family and friends!”

Gracie had locked herself into a dark room, trying to face her fears. How could she deal with the darkness if she couldn’t even be near it without freaking out? That was a few days ago, and she still heard that shrill voice calling out to her. It hid in every corner. Every crevice. Every dark spot in existence. It’d find her and she’d hear it taunting her. She couldn’t do it. She was supposed to be leaving soon, but she just didn’t have the courage to.

Leon’s bright smile turned into one of sadness when he saw Graciela seated with her head in her hands. She looked terrible, like she hadn’t gotten any sleep the night before. Was something wrong? He walked up to her, hoping that seeing him would lift her spirits a bit.

She sensed him almost instantly, he could tell. But she wouldn’t look up. There was no where else to go. “Graciela, you look so different.” But she didn’t answer him. She seemed almost lifeless. “Gracie, are you alright?”

“Go back to whatever dark place you disappeared to,” She mumbled. “I don’t need you here.”

“Well, maybe I need you,” He retorted, inching closer to her. “It’s been two years. I couldn’t stay away any longer. I needed to see you.”

“Trust me and just go away.” She wrapped her arms around herself, no energy to even argue.

“Are you getting enough sleep?” He asked. “Is it…the darkness?”

“Just mind your business, Leon.” She wanted to get up and hide, but her feet wouldn’t move her. And where would she go anyway? Back to her dark house?

“The voices again?” He whispered. She didn’t answer, but looked up at him with tear stained cheeks. That was enough indication for him. “Hey, hey, calm down. They can’t hurt you anymore. I’m here. I will make sure they stay away.” And he hoped that was a promise that he could keep.

Angelica peered from behind a nearby tree. She had told Leon that she’d go exploring, but she wanted to see this Gracie girl up close. To be honest, she wasn’t impressed. The girl was more baggage than she was worth and Leon didn’t need a distraction like her. She crossed her arms over her chest, thinking of a way to deter him from worthless dedication to this girl.