Charlotte gazed at the three tiered cake. She couldn’t wait to taste the decadent french vanilla filling. “We’re married.” Jeff held his hand out in front of him, as if shocked that it had actually happened. “Do you know how many years ago I bought this ring?”

“I was pregnant with Graciela,” Charlotte commented. “How time flies.”

“Are you going to follow me around all day and tell me how perfect I am?” Charlotte asked with a grin. “I like that idea a lot.”

“Yes,” He replied without hesitation. “Every damn minute. I just can’t believe that after all this time, we were finally able to get married. I love you.”

“I love you too,” She replied. “My journey with you has been an incredible one.”

“Here’s to many more then,” Jeff said.

“An eternity.” She slid her arm around his waist and leaned into his side.

After her parents cut the cake, Graciela squeezed into the front of the line. She had a particular sweet tooth, and could usually be entranced out of whatever room she had locked herself into if a dessert was promised. She’d of course hunker back into whatever safe area she had found once the sweet was safely floating in her stomach. She sat down happily, away from the other kids, her anger still not subsided, and devoured the cake. It provided no nutrients for her, but it tasted nice and it made her happy. A small voice broke her form her heavenly moment. “Hi, Graciela.”

She looked up at the pink haired male and frowned. “What do you want?”

“I’m sorry,” he said. “About what happened at my house. I should have stuck up for you. I just didn’t expect my friends to act that way. They’ve never been so mean before.”

“They don’t like my family,” Graciela stated calmly, a saying she had overheard her mom telling her dad. “They don’t want us here.”

“I can’t speak for them,” Braylen said. “But I know that Leon and I want you guys here. He’s my best friend in the whole world and he says that you’re very cool.” Braylen lifted his shirt sleeve to show the bracelet that he had made for him and her. He had spent hours teaching himself how to make them, thinking she would appreciate it. He had given one to Leon as well, and was in the process of making Pax, Nerissa and Camilla one in different colors. “Do you have yours?”
She nodded, putting her fork down.  She reached into the pocket of her dress and held it up. “It came off and I meant to retie it but I got distracted by cake. Are they friendship bracelets?”

Braylen nodded. “Yeah, I like that. I”m going to wear mine all the time.” He took a large bite out of his cake as well. “I am sorry again. Really, I am.”

“Dad says they can’t come over anymore,” Braylen responded. “He likes your family too.” 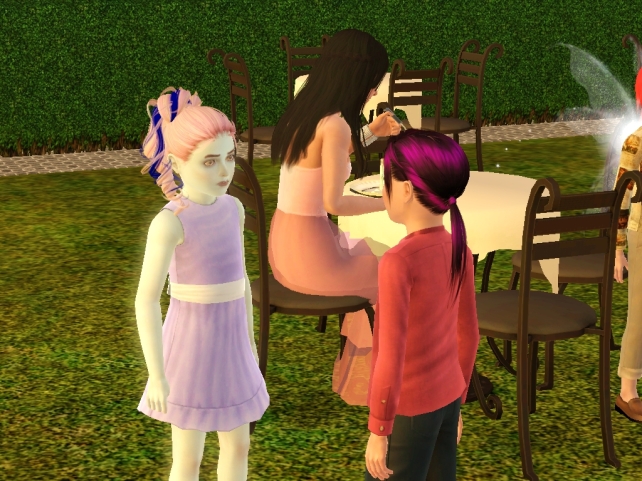 Leon announced himself loudly beside the table. “I have finally arrived!”

Braylen rolled his eyes. “You dummy, you missed the cake cutting.”

“I’m sorry.” Leon rolled his eyes. He looked at Gracie. “Lessons ran over time and I had to get dressed reaaaallly quickly!”

“Did your parents come?” Graciela asked.

“Er…no.” Leon shook his head. “Dad is on the leadership board here, so he had a meeting and mom is sick. So, my dad dropped me off on his way there. I told him that I was invited, until he just had to take me so I’d stop bugging him.” Leon laughed it off, but Graciela could see the far off look in his eyes.

“I’m going to get you a slice of cake,” Braylen said to his friend. “Graciela, do you want one?”

She shook her head. She did, but her mother told her not to overdo it and she wanted to try the cookies that her mother had promised would be out very soon. “No thank you.” Braylen nodded and headed off to go get some more dessert.

“So, your mom and dad are married now. Is that cool or what?” Leon asked, a big grin on his face.

Graciela shrugged. “Feels the same. Mom is mom and dad is dad.”

“Marriage means a lot, you know. It means that you get to spend the rest of your life with someone. It’s like a promise. My dad promised my mom that he’d love her forever, and I’m going to promise someone that I’m going to love them forever.”

“I don’t want to get married,” Graciela said. “I don’t really care. Mom and Dad were happy before they got married, so I don’t see why I need to.” 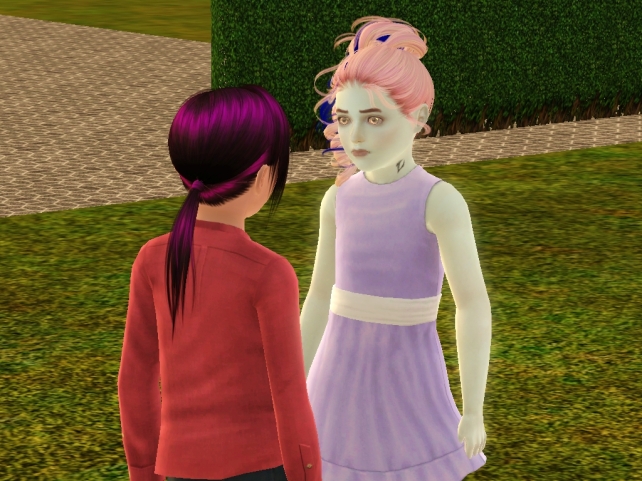 “Even if I asked you to marry me?” Leon asked, seriously.

“Why would you do that?” Graciela asked, tilting her head slightly to the left.

“Because,” He said. “Doesn’t that mean I get to be with you forever then? A husband is supposed to be there for his wife. That’s what my dad always says. I want to be here to fight the darkness.”

“Nobody thinks it’s real,” She replied. “Everyone thinks I’m crazy.”

“I believe you,” Leon told her. “I wish I could see what you see so I could beat it up.”

“I’m sorry about them,” Leon said. “Braylen is too. Did he give you the bracelet?” Leon rolled up his sleeve slightly so that she could see his purple band.

“I’m going to get you a cooler gift,” Leon said. “A ring, so you can tell everyone that we’re married. You have to, okay? Unless, you don’t want to marry me.”

“You,” She said in a small voice. “Maybe you I’ll make an exception for, but no one else.”

Leon beamed. “I will be the best husband. I promise!” 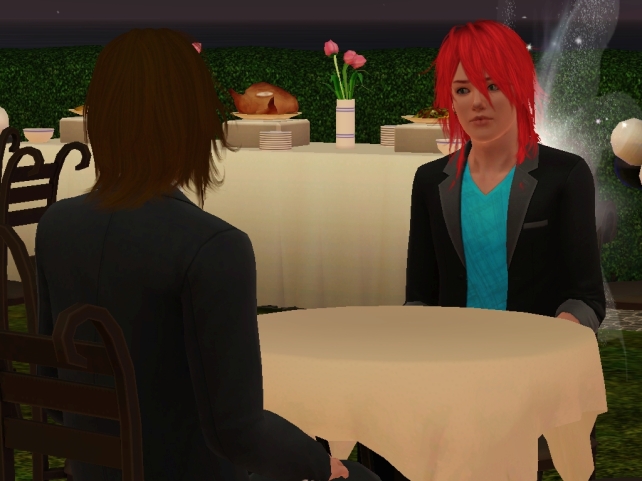 Callen tapped his feet to the music. “I like this song a lot. What kind of music do you listen to?”

Alistair shrugged. “I don’t know, whatever is on the radio while I’m in my lair. Well, I guess that’s not a thing anymore.”

“A lair?” Callen laughed. “Very cool, sort of like a super hero.”

“Yeah, it’s not as glorious as it sounds. Though, I did have some really good memories there. And some bad ones too.”

“It’s this world,” Callen said. “I believe that wholeheartedly. You can’t get any good without having any bad first.”

“Seems to be the case,” Alistair said. “Trust me, I know it well enough.”

“But enough negativity. For me, the storm is over. And, you’re here so maybe that means it’s a fresh start for you.” Callen leaned back into his chair, gaze falling on Braylen talking to Leon. “I think your grand kids will be good for the kids here. They could use some new perspectives. If you haven’t noticed, the people here are very arrogant and self centered. That’s what happens when you’re trapped in the same place for thousands of years. Nothing has really changed here. It’s just been this, always. It gets old fast.”

“I lived in a human only world for the first eighteen years of my life,” Alistair confessed, feeling once again how easy it was to talk to Callen. “But, I barely remember it. I’ve been in Moonlight Falls for so long that it seems like a distant memory, sometimes a fairy tale. But, I didn’t want to leave because it was what I knew, and even now, I didn’t want to leave Moonlight Falls.”

“Well, the people here don’t like me,” Callen said. “They tolerate me because I’m Braylen’s dad and they love him. He’s quite the gentleman. But me? I mean, I’m sure you asked around.”

“I didn’t,” Alistair said. “Because I don’ care about what others say. I want to get to know you from the way you act and speak. And if you don’t want to tell me about yourself from your own lips, then I don’t need to know.”

“Wiseness beyond your young looking face.” Callen gave him a small smile. “Keep this up, and I might tell you one day, from my own mouth if you really care. You Grays are something else.”

Nerissa looked into the crowd of people, a sense of dread washing over her. “Hey,  earth to Rissa!” Harmony snapped her fingers in front off the girl’s face. “Wake up.”

“Hmm? Oh, uh…when did you get here?” Nerissa asked.

“Five seconds ago,” Harmony said. “Why didn’t you sit with us in the church?”

“I wanted to sit with Astra,” Nerissa said.

“Why?” Harmony asked. “She’s not as close as Aunt Charlotte is to me or my mom is to you.”

“Leon is her best friend.” Nerissa crossed her arms over her chest.

“She needs you too,” Harmony said. “She didn’t get mad at you when you hung out with Pax everyday.” When Nerissa shot her a look, Harmony shrugged. “Who do you think got all the phone calls? Mom was always telling me not to stay up too late to talk to Gracie.”

“Let’s dance with them,” Harmony said, pointing to Camilla and Graciela who were on the dance floor smiling and laughing.

“She’s not going to talk to me,” Nerissa said.

Harmony rolled her eyes and grabbed the girl’s arm. “I need a dance partner!”

“Harmony!” She cried, following the momentum of the girl pulling her. Once on the floor, she felt the cold stare of both girls, and wanted to shrink away.

“I love this song,” Harmony said. “It’s so good, makes me want to dance crazy!” Graciela eyed her cousin. “Real crazy, like we all dance, crazy! Everyone will think we’re the life of the party.”

“Harmony,” Camilla began, but sighed, giving in to her wishes. If dancing wildly would get the family on the same page again, she’d do it. She threw her arms in the air. “Bet you can’t dance better than me, Nerissa.”

Nerissa smiled at her friend. “You do too.”

A few minutes later, Pax joined the scene, a big smile on his face. “What is it?” Camilla asked.

“You’re dancing like…really bad,” he said, a smirk on his face.

She punched his arm. “Shut up! Let me see you dance better.”

“Well, you’re missing out then.” She pointed to the girls dancing behind her. “We’re all doing it. It’s fun.”

“I rather talk to you,” Pax admitted.

“About what?” Camilla asked.

He shrugged. “Whatever you want.”

“I want to dance,” She said, grabbing onto his hand. “So dance with me!”

Pax smiled. Despite not liking to dance, if it made Camilla happy, he was happy.
It had been a fun night.