Audric sat outside of his mansion. The inside was big. Too big. It was lonely, despite having Justine living in residence, and that child. He groaned just thinking about her. Did Zinnia ever stop crying? Tears after tears after tears… He stood up and stretched his arms over his head. An eternity spent with a child. Why had he made that decision to appease Astra? It hadn’t kept her here with him. At least Zinnia’s power would be useful in the future.  “Audric.” She was back. He turned to face the beautiful young dimension watcher.

Quinn crossed her arms over her chest and scowled. “Well?” Audric smirked at her. “I was right, was I not?” His face fell when he noticed the other woman behind her. “More women?” He rolled his eyes. “Are you trying to dictate my life?”

The pink haired girl behind Quinn didn’t hold herself as rigidly as the green woman. She was quiet and collected, but seemed much gentler than Quinn. Her confidence lay in the way she smiled. Audric caught himself entranced by her pearly whites. “You feel pain despite your words.”

“We have a lot to discuss,” Quinn replied. She motioned to his front door. “May we come in?”

Audric turned to Linnea and held his hand out. “My name is Audric Brainard. It’s a pleasure to meet you.”

Quinn rolled her eyes. “Let us inside.” Linnea laughed at the two bickering. Audric stepped to the side and motioned for the women to pass in front of him.

“You really need to redecorate.” Quinn looked around the study where all of their meetings had been held. “You have so many rooms in this house, why do you always bring us here?”

“What’s this about colors?” Audric asked. What was she going on about?

“Dark and subdues,” Linnea replied again. “It matches the way you’re feeling right now. Qunn didn’t tell you, but I can feel what others feel. I can read you, as I can read Quin’s agitation at being here.”

“Your dimension brings the worst out in me,” Quinn replied. “If only you were capable of fixing it yourself!”

“Your dimension is at fault as much as mine is,” Audric snapped. “Don’t play great healer here. You haven’t burst in here and fixed all my problems.”

“I’m trying to.” Quinn lowered her eyes at him. “That’s why Linnea is here. She’s the watcher of a nearby dimension. One of the ones that is being targeted. I’ve checked your words and they were correct. There is indeed a threat after several dimensions in the vicinity. Six to be exact.”

Audric’s eyes widened. “Six? Who has enough power to take over six dimensions?”

Linnea played with the pens on Audric’s desk. Normally he’d be annoyed, but it reminded him of something that Astra would do. He pictured his ex lover’s slender hands gripping those ball point pens, using them to scribble his name and hers in a heart. “We don’t know if anyone other than the council has that much power, if we’re being truthful here. But, I felt something off with my dimension. There were holes I could not patch up. These were not your average rifts, Audric. I felt them being held open by a force of some sort. Something strange. I don’t know what to call it.”

“Linnea is an empath of sorts. She feels things that others feel. But her sensitivities are amplified by the power she was given as watcher. You can tell him more, Linnea,” Quinn said.

“She is correct. I feel all living things. And I feel my connection to my dimension quite strongly. I thought all watchers could but alas, it’s just me. I believe we all form a bond with our dimension but for whatever reason, only I can feel mine. When things go awry, I get sick. I can handle smaller rifts, I’ve become almost immune to those. But this bigger threat may just near kill me. That’s why I’m here. We must stop whatever is out there trying to worm it’s way in, at whatever the cost.”

“I will not pay a large cost,” Quinn said. “I have my limits, as does Audric I presume. People he will not harm.”

“I don’t want to hurt people either,” Linnea said. “I would prefer very much if we could do this peacefully.”

“That won’t be an option,” Audric said. “Not with my dimension at least. I have Mason, the guardians, Damian, Altiere and now this threat to worry about.”

“Who are these people?” Linnea asked. 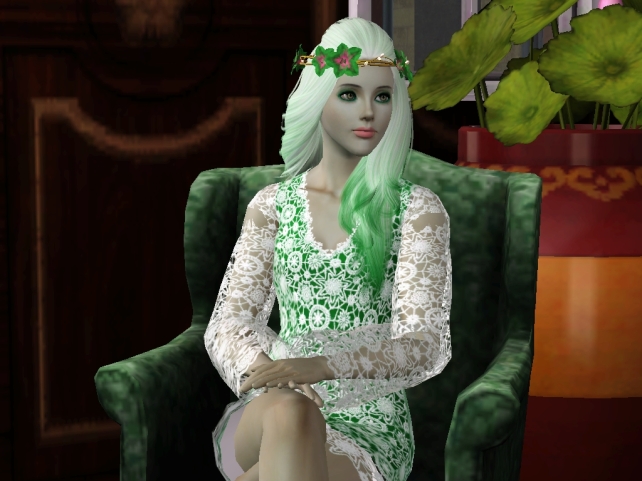 “Mason is trying to reset my dimension with this new found power of his. I’m unclear what Altiere really wants, but even his and Damian’s presence in Moonlight Falls is creating huge rifts. The guardians claim they want to preserve the future, but I fear that is no longer the case.”

“Wow,” Linnea mumbled. “We have none of those things. The rifts came to be recently when I was awoken. They are caused by this new threat we speak of.”

“It’s like the plague,” Quinn said. “Our dimensions are sick and they’re spreading to others nearby. We have to contain them. But lucky for you I have a solution. There are six dimensions in our vicinity, and if we strengthen them all, we should have no problem keeping this threat out. To do that, we must gather the other watchers.  Find the one closest to you and ask them to join an alliance with us. I’ll ask the others.”

“Who said that I’d agree to an alliance?” Audric asked.

“Do you want innocent people to die?” Linnea asked. “If we join together, maybe we can help stop some of your threats.”

“No is not an option,” Quinn said. “Our worlds are going to fall together. If yours falls, mine will too. Do I have to remind you how much we’ve crossed over? Audric Brainard, you will join this alliance with us, the two of us will bond our dimensions together and we will stop our worlds from getting destroyed!” 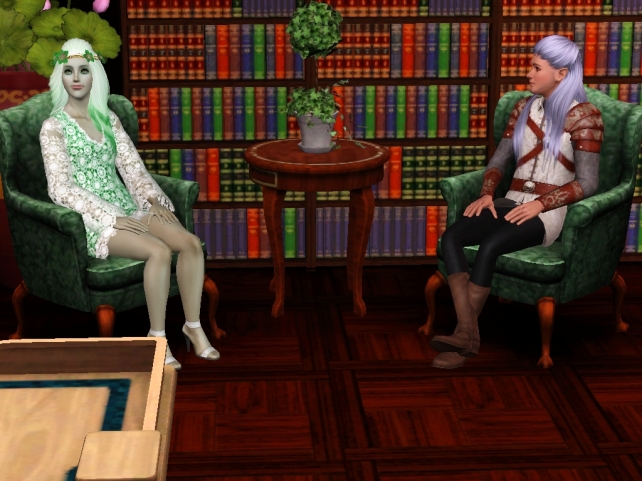 “It sounds lovely,” Audric replied sarcastically, “But I don’t need to depend on you.”

“We depend on each other,” She said coldly. “That’s the deal. Why don’t you want help? You have a child you want to protect right? A woman you love?”

“I knew I felt a child,” Linnea mumbled. “She is hungry right now.”

“He not only has a child, but she is quite powerful,” Quinn said, with a smile. Almost mocking his distaste for the parents’ life. “We can use that. I have an idea.”

“Be happy that I’m helping you!” Quinn argued back. “Shut up and listen. Our dimensions should be able to communicate with each other, so that we can send teams in to help bolster each dimension. The only way we can do that without causing a rift is to teach them how we do it. We need to open a school to teach promising young people how to travel through dimensions!”

Linnea clapped her hands. “That is a wonderful idea Quinn. But how do we know who to choose? We can’t simply let everyone be a traveler, that could be dangerous. We also don’t have any teachers. We can’t be both at the academy and our dimensions.” 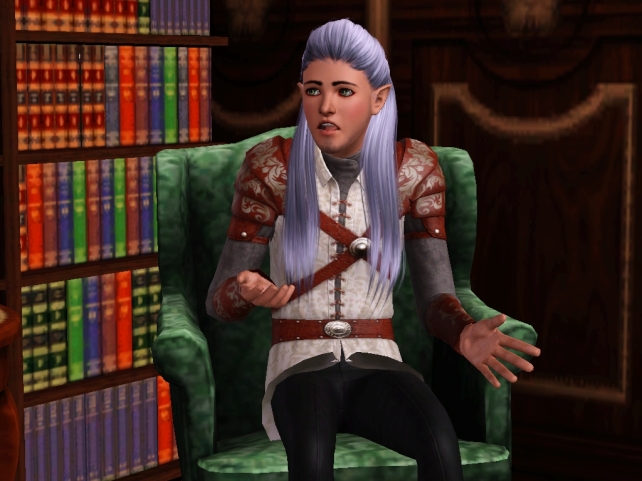 Audric ran a hand through his hair. He hated when Quinn was right. It was a damn good idea. “I..I can supply the teachers. I know people, smart people. Talented people. I have a directory I’ve been keeping from when I was trying this whole team thing before…” He dropped his voice. “It won’t work, you know. One of us will drop out and things will mess up.”

“You have no faith, Audric. Not everything has to fail. Just take responsibilities for your actions and fight for your team. We will do the same for you.”

Linnea nodded. “We will.”

He would try the team thing again, but he wasn’t too inclined with the idea. He needed help. They needed help. They could work together. If he kept telling himself that, maybe the idea would become bearable. “And the students? I know a few individuals.”

“I have just the little mermaids,” Linnea replied. “This is exciting. I cannot wait. At least we will be doing some good with our powers.” 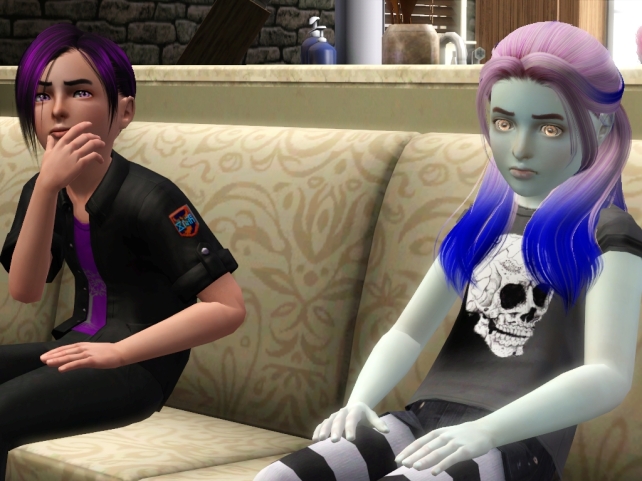 Graciela and Leon were watching television in her living room. It had been a few months since the incident during the camping trip. She trusted Leon despite his words. She didn’t understand how he had heard the darkness if it was inside of her, and neither did he. But now that he understood what she had been going through, he was hesitant to leave her side. “Ok, so what if I wear like reaaally big sun glasses? Like HUGE! Then all attention would be on me.”

Graciela groaned. “They’ll still whisper about me. I’m the freak in the town.”

“Well then I’m a freak too. I heard the voice, remember?” He poked her shoulder. “Don’t worry, it’s just school. You’ll love it. The work is soooooo boring, but the people are cool. Most of them.”

“Just school?” She shook her head. “I haven’t been to a real school…ever! My parents, grandfather and Uncle Erik taught me everything I know,” Graciela said. “My siblings and cousin were my classmates. Besides, what if I hear the voice in the classroom? What do I do?”

“What if you aren’t in my class?” Graciela asked. “Mom told me we might get split up.” 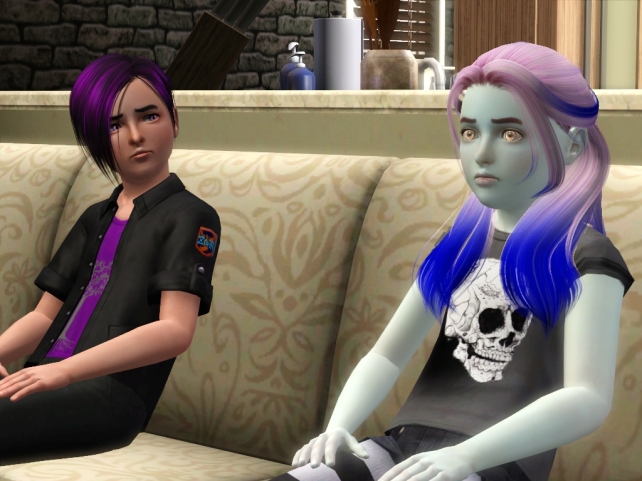 “Maybe Braylen will be in our class,” Leon said. “Don’t worry about it. You’ll see me at lunch and I’ll save you a seat. We can eat together. You just have to get used to it, okay?”

She had to stay positive. “Okay. Maybe it will be fun.”

“So much fun!” He exclaimed. “It’s going to be so great having you there. We can make faces at each other in the classroom.”

“But that’s boring,” Leon replied. “If I’m smarter, would you like me more?” He pondered.

Graciela was quick to shake her head. “I wouldn’t change anything about you.”

“Then why won’t you marry me?” He asked. He had proposed to her at the end of every play date. Every. Single. One. She thought he was joking.

“I told you, my mom didn’t marry my dad until they were all grown up,” She replied.

“Mom says I’m too young to get married.” Graciela kicked her feet against the sofa. What did it mean to get married anyway? Did it mean that Leon would stay with her everyday? He did it already. She didn’t understand.

“Fine,” He replied with a sad smile. “I’ll wait for you. But you better not let any other boy from school marry you.”

She smiled and then laughed. When she was with Leon, she didn’t feel the darkness. If she could feel like this forever, she’d marry him. “I won’t, I’ll wait for you.”