Asher stood by the window as Graciela made herself comfortable on her bed. The others seemed to pay no mind to the two. “You said you knew me,” Graciela began. “How well did you know me?”

“We aren’t linked as closely as some of the others. My job is to convene with the Reaper. The guy who is in charge of what happens to you after you die. Most of the time when you die you go to your necessary ‘realm.’ I can’t talk too much about that but because of my link to the underworld I was able to help you control the darkness within you.”

Graciela leaned forward. “So you know all about it?”

“Yeah,” Asher replied. “I know, rather knew, how to deal with it. I don’t have the necessary resources now to control the darkness it seems, but we’ll figure it out.”

“You could control it?” Graciela asked. “Are you serious?”

“The darkness is like a person,” Asher began. “No one can really control it and manipulate it to do what you want. It is a necessary part of the world. Without the darkness there can be no light. The point is, I’m able to talk to it but now it seems rather unwilling to listen. It won’t submit. Probably because of the imbalance you caused in the past.” Asher handed Graciela the diary. “I haven’t read it, and you don’t need to read it out loud, I just ask that you not go past the first few pages. I know it’s a near impossible request but for your safety please.”

Graciela nodded. “Thank you. It seems like you’re the only one who wants to be truthful with me. It means a lot, Asher.”

Graciela held the book tightly in her hands. She was eager to open it and find out the truth, but what would be in there that made people so wary to tell her things? 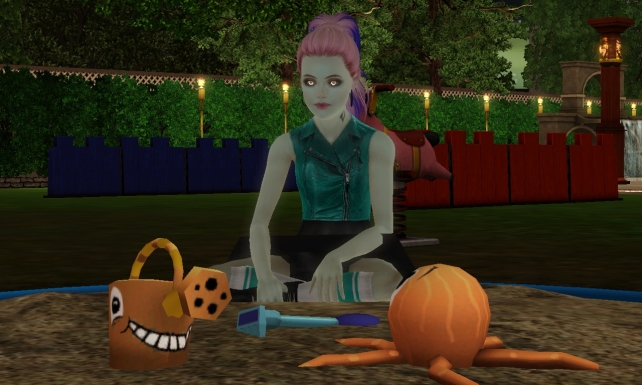 I want to make it clear that I am Graciela Gray. I am chronicling my life, not because I feel that I’m some important being. I’m doing it because I don’t want to forget what’s real. The darkness in my head tries to debunk everything I’ve ever experienced. It tries to tell me what I feel isn’t real. It makes me question everything I am and ever was. But this diary  is in defiance of that darkness. It can say what it wants but the darkness won’t change who I am. It’s all here, in this book.

Now…where do I start? Oh, the crux of this whole thing. LEON. Everything changed after he left. Mom got sick. She was pregnant again, but this time with twins. Two girls, Emerson and Peyton. Pax scrunched up his nose in disgust and pretended that he wanted no more siblings but I could tell that he was excited. Even Camilla’s eyes lit up at the announcement.

But mom, she was not happy because she was always throwing up. She couldn’t eat without vomiting the food out later. She hates simple blood packets but it was all she could keep down. And mom was tired all the time. I mean, she still is. Sometimes she can barely leave the bed. That’s when I sit with her and squeeze her hand while we talk about my day at school. I feel bad lying to her but I don’t want to worry her when she finds out that I’m not attending my scheduled classes. 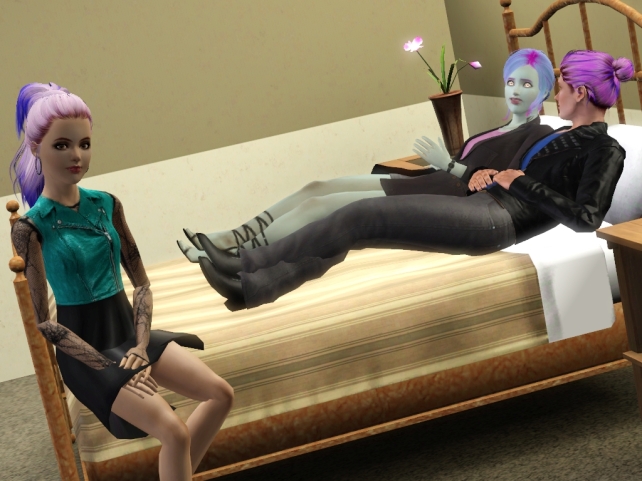 Anyway, mom got sick because Emerson and Peyton are both humans like dad. Grandpa told me that because they don’t have powers like me, Pax, or Waverly, that they took mom’s power to compensate. Or, her energy. She’s still a vampire but she’s more lethargic. If not for Adele’s help, mom wouldn’t have enough power to give to Em, Peyton AND herself. We all thought she was going to die. That was almost 3 years ago and mom is still recovering. But, she’s doing a lot better now. Thank the watcher.

Pax, Harmony and Camilla are 16 years old. Me, Nerissa, Braylen and Leon are 15 now. Waverly and Gregg are both 8 and Em and Peyton are 2 years old. Dad is sick now too. But his affliction is of a broken heart. He doesn’t like to see mom so lifeless. He’s had to take on all the responsibilities of the house. Ethan moved in to help as much as he can. Now that we’re old enough, Pax, Camilla, Nerissa and I help out too. Pax cooks dinner, Camilla does laundry, Nerissa cleans up and I help dad with the kids.

Until death do us part, my parents promised each other. Even now under these tough circumstances I feel that love. But thinking about my parents always makes me think of Leon. I can’t help but wonder why he’s is gone, if we promised the same thing. Until death do us part, right? Even if his marriage proposal wasn’t one out of love, it still meant to me that he wanted to be by my side forever. I always have this thought in my mind. Where was Leon when I needed him the most?

The last time I saw Leon Sikes was when he decided to pop in on the family last year. Despite saying he would keep in touch, I hadn’t actually heard from him up until that point which was years from when he actually left. I felt devastated, but wrote it off as simply friends moving on. I can recognize that people don’t always keep in touch with people they had in the past. If Leon didn’t want to be friends anymore and make the effort, that was fine.

What wasn’t fine was his frowning face when I pulled open the door and saw him that day. “I know it’s been forever…” And me consequently slamming the door in his face. I remember my hands were shaking, because it was the end of summer break and I started high school the next day. My nerves were already getting the best of me. He wasn’t someone I factored into that equation.

Eventually, mom made me open the door because she said it wasn’t often that boys went that out of their way for someone. The last guy who had done that for her, she said, had married her. I figured she was right. Not the marriage part, but the going out of his way thing. Leon had come to talk and I guess I owed him an ear to hear him out. I opened the door again and he looked even more distraught than he had before. “Graciela Gray, I’m so sorry for being a terrible friend and basically disappearing for 2 years!”

Leon had grown up immensely. I almost didn’t recognize him with his long hair covering his face and his piercing lavender eyes peering through. “It’s alright,” I nearly whispered, not able to even find my voice. I’m always accepting people’s apologies, even if I’m upset with them. Nerissa calls me a pushover, and I guess she’s right in some cases. I let people walk all over me. Especially Leon.

I stared at him dumbfounded until he reached out and pulled me into a tight hug. A hug that made all of my worries slip away. Really! It was like, for that moment, my mind was clear. Leon gives magical hugs.

“I really missed you, Gracie. I couldn’t stop thinking of you.” It was those words that were the most unfair! How could he say those things when I was just getting used to the idea of losing him? Just like that, all the emotions I had tried to push away cam tumbling back. I really missed Leon too and I couldn’t stop thinking about him either. That ring, his promise. All of it. “I would have called if I could, but my training regime was so strict I wasn’t allowed distractions from outside sources. Now, things will be different. I’m in a new program.”

But things were not different because now at the age of 15, one year later, I haven’t heard from Leon. I understand his classes take up most of his time but, what could he be doing that he can’t call or text every once and a while? When I think of Leon, the darkness likes to poke fun at me. I guess I’m an easy target?

Now, I’m sitting on my bed writing this all down. I don’t know what much else to say. Braylen and I are closer than ever. He’s my best friend. We bonded over the fact that we had both lost our other best friend when Leon left. There’s a new guy in town too, living with Braylen’s dad. Wolf. No one knows how he got here exactly. Well, maybe Callen knows but he hasn’t told Braylen. Which means that I don’t know.

Grandpa and Callen….I haven’t mentioned them yet, have I? Oh boy. As of right now, as I’m writing this the two of them ARE STILL NOT TOGETHER. Seriously. They go out on little dates, which always involves taking me and Braylen somewhere. Sometimes Pax and Cam come along. The problem with grandpa and Callen is that they put their paternal instincts first and won’t admit that they’re totally gaga over each other!  I mean, I can admire putting family first and I guess it’s none of my business really.

The only other thing I want to get out before closing this diary for the day is Nerissa. She above all else causes the darkness to fluctuate. At times, she’s my best friend and we spend all night together joking and laughing. But, more often than not I’m hanging out with Camilla because Nerissa is too busy with Shea and Raina. Popularity has consumed Nerissa and my “affliction” with the darkness is just too much embarrassment for her. we’re still family though and I don’t want to give up on her just yet. 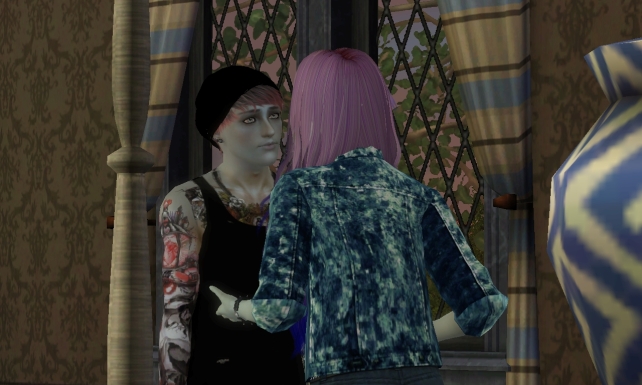 Graciela looked up at Asher and frowned.  She closed the book forcefully. “That wasn’t nearly enough!”

“It’s a start,” He replied. “Do you feel like you have even a slight insight on your life?”

“My family and friends…it seems like I cared a lot about them. But that information is so minuscule to the bigger picture. I want to know what happened to me and where my family is all right now.”

“Is it?” Asher asked. “Miniscule, I mean. At your very core, your family has always come first. That’s been true for as long as I’ve known you. Now, your actions in the future will make more sense thinking about this foundation.”

Graciela furrowed her brow. “Maybe but…”

Asher took the book from her hands. Graciela hadn’t tried to fight him on it and simply handed it over. “Everything is best in moderation.”

Asher frowned. “If it was up to me…the darkness is a fickle thing, Gracie. I wish I could show you again what you saw a few years ago.” He readjusted his hat. “It’ll all work itself out. I promise.”