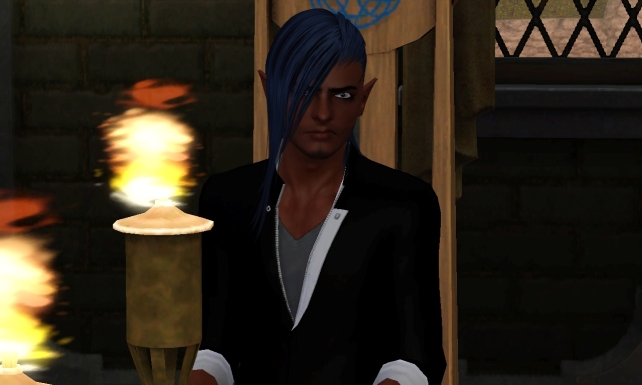 Cassius had gathered everyone in the dining room to discuss something “of utmost importance.” Graciela wondered what that could mean. It could be anything really, but what she really wanted to learn about was the fate of her family at home. Having read the first section of her diary, she was feeling even more homesick than she was before. Graciela missed her family.

“I presume everyone has settled in nicely?” Cassius asked.

“Nicely?” Dragos scoffed, crossing his arms over his chest. “This place sucks.”

“I’ve acquired for you all a house unlike any in existence. You all live in the lap of luxury, and yet you’re still ungrateful?” Cassius demanded.

“You took us from our home,” Briella said quietly. “It’s not the living arrangements that we have a problem with. This place is lovely.”

“I saved you all,” Cassius replied. “Your previous dimension is in shambles. You are all helping to create a new one for your loved ones.”

Mason kicked his feet up onto the table, earning a glare from Cassius. “Well thank you knight in shining armor, for saving us from something we didn’t need saving from. You said so yourself, the dimension is still in one piece. As far I see it, there’s no reason we really need to be here other than to do your bidding.” 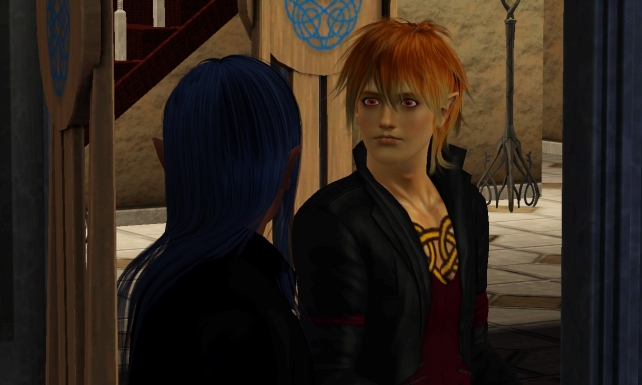 “If I were to leave you of all people down there, the dimension would implode upon itself. You’d take advantage of it’s vulnerable state and the impending destruction would lead to the downfall of several dimension nearby Audric’s,” Cassius snarled.

Mason rolled his eyes. “You don’t understand my motivations at all. My goal isn’t to destroy a dimension. Someone of your stature should do more research on his inhabitants before demanding things from them.”

“Anyway,” Cassius said through gritted teeth. “As much as I’d like to argue with you Mr.Moon, we need to discuss how you’ll go about populating this world. You have no dimension without people. Dionysus, I’m leaving you in charge of traveling to other dimensions as you’ve done it multiple times before. Your job is to find people to come and live in ours. Simple.”

“It’s probably not that simple, but I don’t see why I shouldn’t help you,” Dionysus replied. “What dimensions do I go to?”

“There’s one nearby. A good place to port would be Isla Paradiso. I’m sure you’ve heard of it? Well, in this particular dimension, supernaturals are not uncommon. You’ll see many of them strolling around the beach town. I think it’s a good place to start as it has a variety of people and no rifts that could be further exploited once you travel,” Cassius said.

Dionysus nodded. “Sounds good. Anything else I should know?”

“I’m allowing you to take another with you. Choose whomever you’d like, as long as you both travel through the dimension safely. Though, I’m sure you know how to do that?” When Dionysus nodded, Cassius continued. “Good. The others have no real impending duties until we have more people withing our dimension. Dragos, for example, can’t grant wishes without any people to wish for them.” 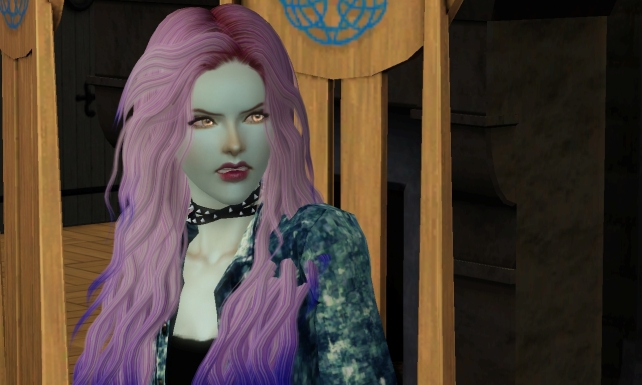 “I’d like to take Graciela with me,” Dionysus replied. He looked to the vampiress. “How do you feel about that, Gracie?”

“Me?” Gracie asked in shock. “Why me? Someone else is probably much more equipped to help you get others to come here. Someone friendly like Caleb or Asher.”

Dionysus smirked as he leaned back into his chair. “Trust me, I need you on this one.”

“I mean…if you’re sure about it. I’d love to come,” Graciela replied.

“The vampire of all people?” Cassius rolled his eyes. “The sun will kill her.”

“I can handle some sun!” Graciela answered angrily. “I love the sunlight.”

“I’ll provide some vampiric sunscreen,” Cassius replied, ignoring her outburst. “Just be careful not to die, will you?” 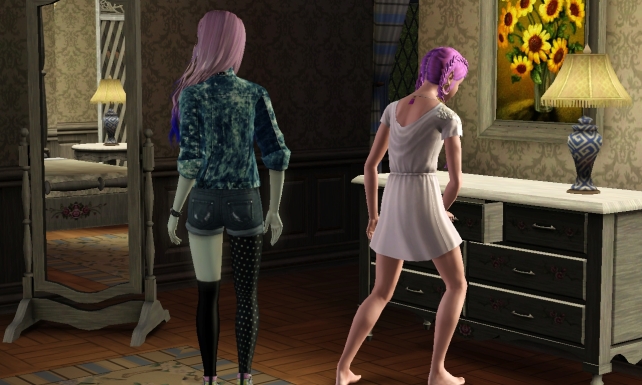 Graciela groaned as Briella threw outfit after outfit at the girl. “Briella, that’s probably enough clothes to try on.”

“You have to blend in,” Briella coached. “Isla Paradiso is a beach town, right? I’m not too familiar with your modern customs but I imagine you’d wear something vibrant and bright to a tropical town.”

“Shorts and tank tops,” Graciela replied. “It’s nothing too extraneous.”

“And you’ll tie your hair up in a bun, with a braid!” Briella’s eyes lit up. “Come, sit down we’re going to experiment with some lighter makeup.”

“Dionysus better be changing his look too,” Graciela said. She did as she was told and sat down. Her mind drifted to her diary. When they were children Graciela and Nerissa would do things like this. It didn’t seem like that was the case when she was 15. Nerissa prioritized her popularity over her friendship with Graciela. How did Nerissa feel about Gracie now? Maybe leaving this mansion would help her find out something, anything, about what had happened. 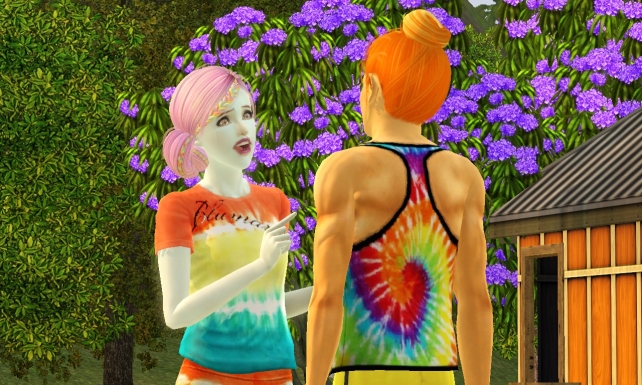 Graciela took in her surroundings. Isla Paradiso was stunning. The atmosphere was calm and serene. There seemed to be an abundance of sunlight. Graciela felt amazing.  She looked to Dionysus. “This place is absolute perfection. There is so much sunlight to bask in! I feel awesome. I love it!”

“I knew you would,” Dionysus responded with a large smile of his own. “Isla Paradiso is known for it’s sunny atmosphere, sparkling waters and gorgeous beaches. We have one in our dimension too, but supernaturals aren’t really as prevalent.”

“I don’t imagine this being a very friendly place for vampires. On a vacation perhaps, but to live here? We’d die without the vampiric sunscreen.” She sighed. Cassius was right about some things. “Still, it would be nice to live in a place where there isn’t any darkness…”

Dionysus nodded. “I chose to take you with me because I knew you’d relish in the sunlight. Just be careful and use as much as that vampiric sunscreen as you need, okay?”

She nodded. “Of course. So what’s the plan of action? We just waltz up to people and ask them if they want to live with us? Something tells me it won’t be that easy.” 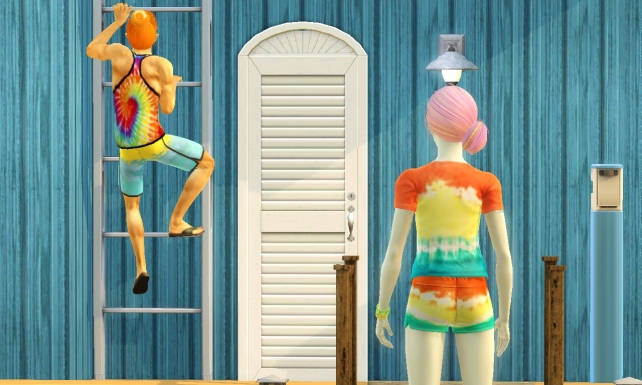 Dionysus let out a laugh that reminded her of a little boy. It was hard to believe sometimes that he was older than even her parents. “What’s that behind me?” He grinned.

“Not just any boat. But a house boat,” Dionysus replied. “Come on. We’re going to have a little fun before we go around recruiting people.”

“We can’t just do that, can we? Besides, is this even your boat? We just got here, how did you manage that?” Graciela asked.

Dionysus winked. “Don’t worry about it. I took care of everything before we got here. Now, you coming or what? Watch your step.”

Dionysus began climbing the ladder that led to the top of the blue boat. “Wait up!” 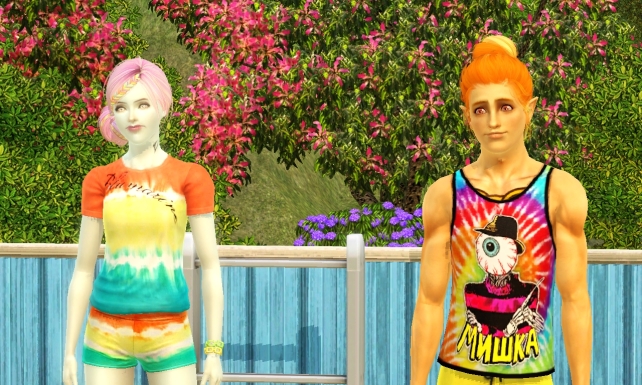 “It’s even prettier from up here!” Graciela gasped. She loved the feeling of the wind on her arms.

“You look good,” Dionysus replied. “Happy. Should we get you a surfer boyfriend out here? You’ve got the look going for you and everything.”

“Hush!” Graciela hit his arm. “Briella picked out this outfit. I’ll admit it’s cute, but I prefer something with more studs.”

“Studs? I’ll keep that in mind for the next dimension we go to. I hope you don’t mind me taking you every time. I’m hoping seeing as many places as possible will trigger your memory somehow. It’s worth a shot at least.”

“Honestly, that’s why I agreed,” Graciela told him. “Thank you.”

“Of course. Listen, I know I’m not your real uncle. he situation with Astra was a disaster but, I consider you my niece. I will do anything to help you.” 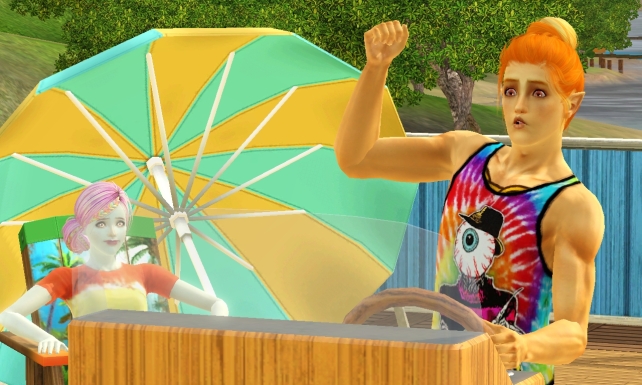 Graciela made her way to the lounge chair that hid under an umbrella. It was the perfect amount of shade that still allowed her to see the bright sun without being burned. Dionysus took her lead and started up the boat. “You don’t have to be blood for me to consider you family. Camila vouched for you when we were kids, and mom and dad thought so highly of you. Even now, you’ve been nothing but courteous to me. I consider you family.”

Dionysus smiled. “Thank you.” When the moment was over, he reached up and pretended he was conducting an old train. “All aboard the Dionysus Express! Sit back, relax and enjoy the ride. I figure we just drive around until it gets old.”

“Will it ever get old?” Graciela mused.

Dionysus shook his head. “We could sail forever. There’s food in the fridge downstairs.”

Graciela laughed. “Unless there are plasma packs, I don’t know how much good that will be for me.” 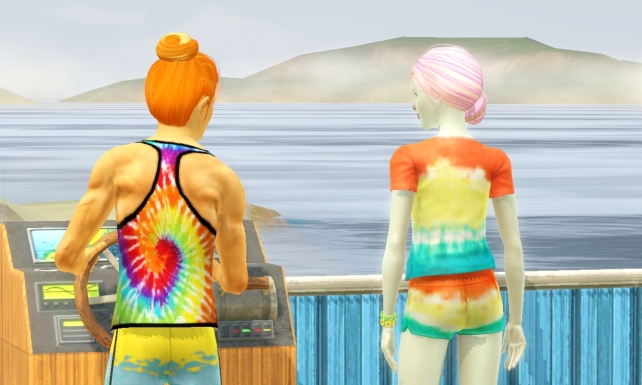 Being on the boat was relaxing and Graciela was thankful that she had Dionysus there with her. He was family. She didn’t ever doubt that. She remembered how highly her parents spoke of him. He had their back, and would have hers. She stood up and approached him, staring out into the vast ocean. “Enjoying the view?”

“It’s perfect. Watch.” Dionysus parked the boat and turned to face the girl. “It’s dissipating as time goes on. It’s quite the sight.”

“You didn’t stop to look at the fog,” Graciela commented. “Whats up?”

“Your diary,” Dionysus replied, not bothering to mask his intentions. “I know it was just the beginning but did it say anything about my son? Knox?”

Graciela frowned. “Not yet. But, I’ll keep an eye out! I promise. Have you guys ever met?”

Dionysus shook his head. “No. His mother- your aunt, doesn’t exactly like me much.” 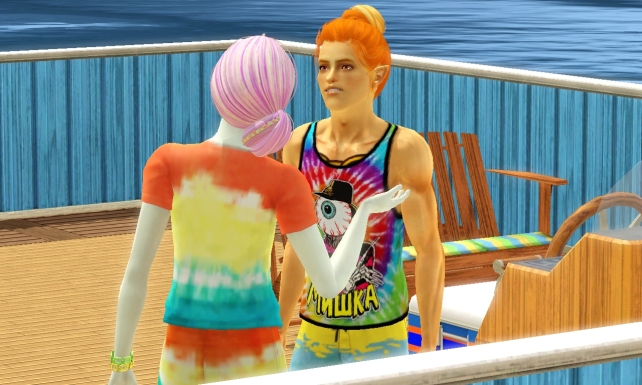 “She doesn’t like anyone,” Graciela commented. “At least, from what I remember. She was always very recluse. I always found it strange that she wanted to live with Audric away from everyone. When she came back she purposely separated herself from us.”

“I don’t understand her,” Dionysus admitted. “I don’t think Audric did either. That woman is a mystery. But all I care about now is seeing my son. I want to know if he hates me. What kinds of things has his mother been telling him? I just want to make sure she hasn’t painted me as the villain who doesn’t care because if things were different I’d be there for him.”

Graciela placed a hand on her heart. “If I come across any information I’ll let you know first. You’ll get to meet him. I’ll get to meet him too…” Because the last time that she had seen him, he was only a toddler. How old was he now? “Can I ask you something Dio? It’s been bothering me for a while now.”

“How old am I? How much time has been lost?”

Dionysus placed his hand on his chin. “Being immortal, I never really thought of that. Let’s see, I think Knox is 21 now and you were about 10 when he was born so you’ve got to be 31 years old.” 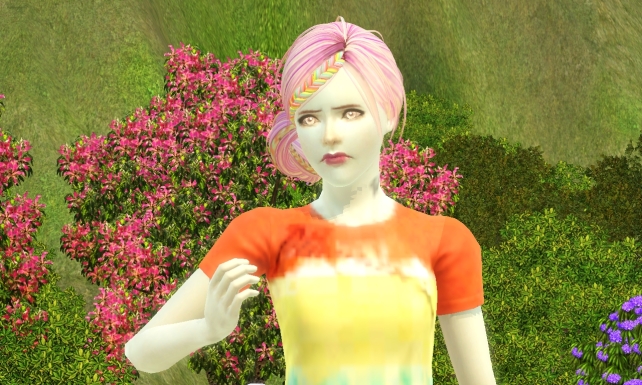 “31!?” Graciela exclaimed. “That’s…impossible! I lost decades of memories!” She felt her head spinning. So much for a peaceful ride around Isla Paradiso. “I can’t be 31, can I?”

“It’s not too bad,” Dionysus said, reaching out to place a comforting hand on her arm. “You’re a vampire, you live longer than most. You haven’t missed out on much and we’ll get your memory back.”

“But that means all my friends are in their 30s and they have adult problems and expectations. I feel like an adult. I speak like an adult. I can remember how to do certain things, but the actual memories are nonexistent. Who I am and what I did are gone. ”

“One day at a time, Gracie,” Dionysus coaxed. “Don’t worry too much about everything. We;ll figure it out. I promise.”

“I hope so,” She muttered to herself. “I really really hope so.”