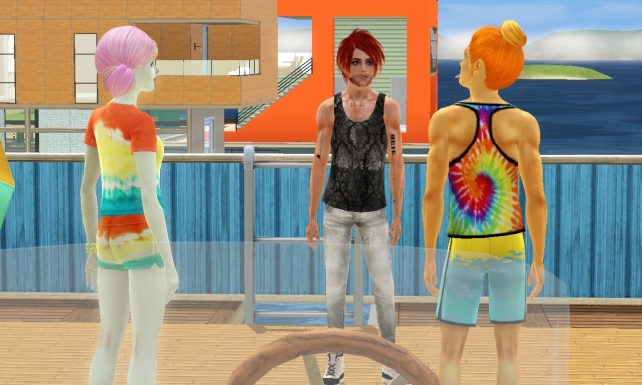 Graciela and Dionysus were enjoying their time on the houseboat despite Graciela’s growing anxieties. She didn’t feel like a 31 year old woman. She didn’t feel much like an adult anymore at all. But still, she smiled for Dionysus’ sake because he had been trying so hard to help her. They both stopped what they were doing when they saw a flash of blue light on the deck of the boat. In a matter of seconds a man with red hair materialized. “What the hell?” Dionysus asked. He recognized the light immediately. “You just traveled here from another dimension.”

The man rolled his eyes and stepped forward. “Yeah, a seasoned dimension traveler would know that huh?” The man glared at Dionysus and Graciela. “I’m going to have to ask you both to put your hands behind your back. You’re under arrest for unlawful traveling.”

“What?” Graciela asked in confusion. “What does that mean?”

“Unless you’ve been certified through The Academy, you’re not allowed to travel through other dimensions. It’s the new law.”

“Since when?” Dionysus scoffed. “I’ve been traveling, safely might I add, for centuries.”

“Since there’s been an increase in the rate of traveling that has resulted in rifts. Not to mention there’s been a few notorious travelers on the loose who are experts at disrupting the continuum in a way that almost goes unnoticed. As a member of the Dimension Police I’m going to have to ask you to provide your name, origin and dimension number as well as the teacher who signed off on your ability to travel.”

Dionysus began to laugh much to Graciela’s dismay. “I’m sorry, Dimension Police? How original! Couldn’t you guys come up with something better?”

“You think this is a joke? After dimensions 10010 and 10011 have become sealed off, we have to stop any unauthorized travel as to not let the destruction spread. This is serious business. Thousands, if not millions of lives are on the line.” The red haired male glared at Dionysus.

“That’s one of ours!” Graciela exclaimed. “Our dimension was sealed off. Audric is the keeper. Which one is that?”

“Dimension 10010?” The man furrowed his brow. “That’s not possible, is it?” He murmured to himself. “I’ll have to contact the headmaster and see what she has to say about all of this. What’s your name?”

“Hold on just a second,” Dionysus demanded. “We’re not telling you anything until you tell us more about this dimension 10010.”

“I’ll have you both detained!” The man snarled. He looked at Graciela with a softer expression. “My name is Agent McKay. I’m in charge of investigating dimension traveling out of Dimension 10010 from the time prior to and immediately after the cataclysm. If you say you’re from that dimension, your cooperation would render helpful. The Dimension Police are trying to track down the person or group responsible for the violent act.”

Graciela nodded slowly. This would prove helpful, wouldn’t it? It sure seemed like it, but Dionysus was less than impressed. “So you’re going to just corner her with the whole protector shtick?”

“Sir!” Agent McKay glared at Dionysus. “I really will detain you if you don’t stop. This is a kind of jail that you don’t want to go to. Trust me.”

“Dio please,” Graciela said calmly. He scoffed but obeyed her command. “How can I help you?”

“I have a list of people I’m looking for.” He reached into his back pocket and pulled out a folded up piece of paper. “These people were all missing from the dimension after the tragedy. They were people not registered dead so we have reason to believe they’re in another dimension.”

“You guys can’t possibly be on top of every person who lives in a dimension. That’s insane! There are people who travel so frequently that you can’t pinpoint them to a single dimension, or who are too powerful for a simple police force to catch,” Dionysus said.

Agent McKay rubbed the bridge of his nose. “I’m well aware of that. By finding these people on the list I’ll be able to narrow down a motive, or at the very least something of interest.” He held up his list for Graciela to see. “The people on this list are all related. They could be in danger, which is why they may have fled. Or, maybe they were ousted. All I need for you to do is keep an eye out for them. If you see any of them, would you call my badge number?”

“What kind of police officer doesn’t do a background check on the people he asks to help him?” Dionysus asked. “Are you a real cop?”

“Of course I am.” Agent McKay was able to produce a badge from his pocket. “I don’t have to do a background check on the young lady as she confirmed what dimension she was from by uttering the name Audric. Regular dimension travelers are unaware of the Dimension Watcher most of the time. For her to know who runs her dimension, she must be someone of import. Not just anyone knows about the politics of dimensions, even if they’ve received their traveling licenses.”

“I can help you,” Graciela offered. “But, I might not be as effective because my memory is sort of missing…”

“What do you mean missing? You have amnesia?”

“No.” She shook her head. “I know who I am, I just can’t recall a majority of my life. So I don’t know what this big tragedy is. Is everyone dead?” He heart beat sped up. When she had uttered the word tragedy aloud it became real. There was a tragedy in her dimension. Was her family okay? Was the tragedy the destruction of Lunar Lakes? If so, were her parents and siblings safe in Fortitude?

Dionysus placed an arm in front of Agent McKay. “As to not overwhelm her, I’d appreciate if you don’t tell her what the tragedy was. She’s finding out gradually. I don’t expect you to understand.”

“That’s not my business. The business is with the people on this list. I’ll read some of the names, and you can let me know if you know them first.” He looked warily at Dionysus. “I don’t know if I can trust you.”

“Are you freaking serious?” Dionysus demanded.

“If you want my help, you’ll get Dionysus’ too,” Graciela said. “I won’t help otherwise. He’s trustworthy. I promise! I mean, my word might not be that powerful, but…”

“Fine,” Agent McKay gave in. “But know that if anything happens, I will have you both face a fate worse than being detained.” Agent Mckay began to read the names off of his list. As he was doing so, Graciela couldn’t help but stare at his arm tattoos. For the first time she realized that he didn’t exactly look the part of a police officer. His formal tone and confident manner told her otherwise and she believed his words. His hair was messy and his eyes a deep aqua. The tattoos on his arms reminded her of a cyborg. “Graciela Gray.”

“That’s the first name. Do you know her? She’s gone missing from the dimension, reported by the watcher himself, Audric.”

“That would be me!” She exclaimed. “Audric reported me missing?”

Agent McKay crossed her name off of the list. “And you said have a large chunk of your memory missing? I don’t know how that correlates but we’ll figure it out. Vampiress, white hair with blue tips…yepp it checks out. The others on this list are all Grays. They may be related to you. Would you know where they would be or why they’d go missing?”

Graciela’s heart caught in her throat. The rest of the names on the missing people’s list were Grays. That could mean something very bad or something very good. They could be unharmed or they could need help. Still, if anything would trigger her memories it’d be her family. “No, I have no idea but my dad used to be a cop. I think I can help you investigate. It’s in my blood.”

Agent McKay smiled. “Call me Quincy then, Graciela. Let’s find your family. Do you know these names? Pax, Waverly, Lily, Jordyn, Travis and Knox. The others on the list have different names but I was informed they’re linked: Camilla Kearns, and Gregg Mace.”

Graciela felt her hands go numb and she could see Dionysus grow stiff at the mention of Knox. “My son is missing?”

“Knox,” Dionysus said weakly. “Damn it. We’ll find them, Graciela. Your siblings, Camilla…all of them.”

“My cousins are on that list too,” Graciela replied. “What does that mean? Is my family okay?”

“All it means is that they left Dimension 10010 when the cataclysm occurred. If they left one dimension they’ll have to be in another, right? I’m looking now, but it’d be a lot easier if I had more eyes. Tell you what.” Quincy reached into his back pocket again. He pulled out something that looked like a cellphone and typed a few things on the screen. “You’re registered as an honorary deputy Graciela. Your friend there can be your partner. Now you should be able to travel with no problem. Is there a way I can reach you?”

“We don’t exactly have phones,” Dionysus replied. “So, no.”

“Are you serious?” Quincy asked. He ran a hand through his hair. “I got you covered then. Here.” He handed Graciela the device he had just input her information on. “It just texts and emails. Besides that it has all of our case notes and databases but you’ll need a password to access that, but you don’t have to look those over. Just text me on that device, my contact should be listed. It’s secure, no one can trace it.”

“Have you searched any other dimension?” Graciela asked.

“Yes,” Quincy replied. “A few. Those are marked in the map feature. If it has an X on it, it means no one was there. I’ll link our devices so that when I mark something on the map, you’ll see it too.”

Graciela nodded firmly. “Let’s do this then.” 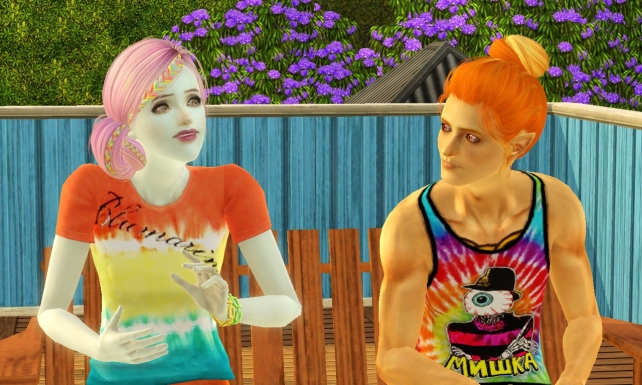 Quincy McKay exited the same way he had come, by phasing out. Graciela at down on the bench next to a very concerned Dionysus. “Your son is out there.”

“You have much more on the line,” Dionysus replied. “Your siblings, friends and cousins.”

“Yeah,” She replied. “But now at least I know something about my family. They’re out there in different dimensions. I refuse to give up hope and think that anyone is dead. I mean, we’re Grays. We’re a strong bunch. Nothing will take us down.”

“Exactly,” Dionysus replied, straightening up. “You’re right. They’re a tough bunch. Though, I don’t think we should tell Cassius about this. Keep that device to yourself.”

“I will,” Graciela said. “Something isn’t right about that guy.”

Dionysus sighed but stood up. “Let’s go scope this place out. Looks like there’s no time to play games any longer, we have other dimensions to check.”

Graciela nodded. “Right. Let’s do this.”