Graciela’s heart beat rapidly. She texted Maric and told him that she’d meet him by the cafe on 7th street. She was too nervous and didn’t want her parents questioning him like he was some kind of criminal or something. Her dad especially. Jumbled  thoughts hurled themselves at her. What if she was dressed too casually? Would he notice the glitter she put around her eyes for him? What if he was standing her up? None of these thoughts flew into her head when she thought about Leon. It didn’t matter what she looked like and she knew he’d never stand her up if he had promised her ahead of time he’d be there. The difference between Maric and Leon was that Leon didn’t make her heart jump. Maric did. Leon was safe and secure. She knew what to expect with him. Graciela was excited for her date with Maric, not so much talking about Leon’s kiss.

Graciela played with her cellphone in her hand. She didn’t use it as often as other teens did. It helped her keep in touch with her family and it acted like a flashlight in the dark. It felt foreign in her hand. She had received no texts from Leon this morning. She remembered that she had blocked his number. She didn’t really have a reason to, other than not wanting to face rejecting him. He was her best friend. That didn’t mean their relationship had to be romantic. Braylen had confirmed that, but why did her stomach churn thinking about how this would make him feel? Graciela felt bad telling him she wasn’t going to promise herself to him.

But there was no romance. No date. No declaration of love for all to hear. Leon kissed her on a couch and left an hour later. Claiming her or not, she wanted to be treated like a princess not a dog. Her fingers tapped nervously on her thigh. She was early. Too early? Was she supposed to play it cool when Maric got here?

When Graciela looked up she caught eyes with a smiling Maric. She couldn’t help but giggle at his signature “bored cat” shirt. He had an interesting sense of style. He walked over to her, smile never leaving his face. Finally, he outstretched his arm to clasp her hand and brought it to his lips where he planted a kiss on the back of her hand. She couldn’t help but blush. “Good morning,” Graciela mumbled.

“It is now.” He winked at her, causing her heart to do flips. Yep, Leon had never treated her like this. Maric was one of a kind. “You look cute today.”

“It’s what I always wear,” Graciela said with a small shrug.

“Exactly,” Maric agreed. “You look cute everyday. I wanted to tell you earlier you know, but I didn’t want to scare you away. I thought you were in love with that Leon guy you always talked about, so I didn’t speak up.”

“I’m not,” Graciela said. Though, she felt her hands clam up. “He’s just an old friend. That doesn’t mean we’re in love.”

“That’s good to hear,” Maric confirmed. “Especially because I was afraid you were avoiding me because of something that boy said to you.”

“He can say what he wants,” Graciela replied, linking her arms with Maric’s. “Doesn’t matter. Actions are what matter. Not words.”

“The park?” Graciela asked in awe. Maric had told her he had a surprise for their date. She was sure he’d bring her to a movie or a restaurant, not the park. “You’re a vampire, you realize that right?”

Maric shrugged. “And? I can handle it. It’s not like the movies. The sun won’t bake me for a few hours. You know that.”

“But it’s very uncomfortable unless you’re used to it,” Graciela replied.

Maric waved her off. “The sun is shining bright. I want to hang out with you where you’ll be the most happiest. If you’re smiling, I am too.”

It was a bit corny, but Graciela swooned because she knew that he had meant it. For whatever reason, Maric Endar like HER. Not the pretty popular girl he lived next to, but her. She didn’t know what to say to him or what to do next, so she followed his lead to a bench where he led her to be seated. There seemed to be no real plan other than hanging out in the park, which Gracie was totally cool with.

Graciela sat next to Maric. She was smiling so widely, she didn’t think it’d ever leave her face. “Your birthday,” Maric said suddenly. “You’re turning 16 soon, are you going to do something?”

“Mom said no sweet sixteen. She doesn’t want to reward Nerissa,” Graciela said with a frown. “I don’t mind.”

Graciela turned away from Maric. She’d be lying if she said she wasn’t a little disappointed that her family wouldn’t be acknowledging her birthday in a grandiose fashion. A big party was’t her thing, but she was sure that even if her family wanted to have something for her Nerissa would somehow get in the way.  “Don’t lie. I know you mind. Let’s do something.”

“I should really be home to celebrate with Nerissa. We always celebrate our birthdays together…” They weren’t the same day, but in the same week consequently. There were pictures of Nerissa and Graciela celebrating their birthday in Audric’s Haven and in Fortitude. How things could change in just a matter of years.

“It doesn’t sound like she wants to spend her birthday with you,” Maric replied.

“Of course she does,” Graciela said, though her tone was deflated. “She wanted to have a joint sweet 16, remember?”

“She wanted to have a sweet 16 like Shae and Raina, so she used you as a means of getting it,” Maric said. “She made you cry, don’t forget that.” He reached out and curled his fingers around hers. “What I’m saying is that you deserve a happy birthday. One where you’re celebrated. Stop playing second to Nerissa. You deserve the spotlight.”

Graciela thought about it for a moment. She deserved the spotlight…It was a thought that hadn’t ever crossed her mind. Part of her wanted to share her birthday with her long time friend, even if she knew Nerissa didn’t much care for her presence anymore. “It’s really okay, Maric.” 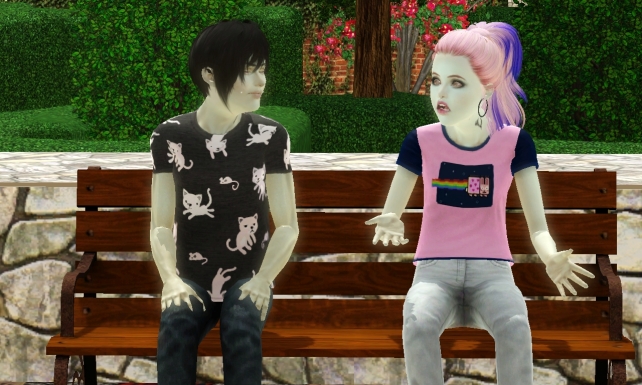 Maric decided to drop the topic for now, but he wasn’t go to let Graciela take the back seat to a girl who had tossed her best friend aside for a more attractive offer.  “Let’s talk about something else. I don’t mean to upset you.”

“I’m not upset,” Graciela said. “It’s just…hard. Everything is so hard. My head is swirling and I just want to be okay.”

“I’ll be here for you every step of the way,” Maric said. “I promise.” That was why, in this moment she knew Maric was the right choice for her. He’d be here while Leon was gone. She couldn’t wait forever for him. She looked down into her lap. What else would they talk about?

“What’s wrong?” Maric asked. “Did I say something?”

“It’s just…” She wondered if it was worth telling Maric about Leon kissing her. “Maric, can you tell me something? I just want to know if this is just a casual date or…”

“Or do you want me to be your girlfriend one day?” She bit her lip, waiting for his face to contort in anger or dejection but he had remained calm. 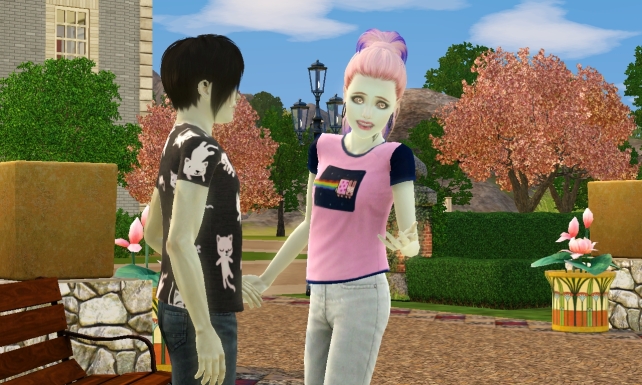 Maric stood up and helped Graciela rise with him. He held her hand, willing her to look at him. “I want to be your boyfriend. I don’t know if we’re old enough to really know love, but I’m happy when I’m with you. You make my heart leap.”

Graciela was filled with all sorts of emotions. But first and foremost, she was filled with happiness. “So when you say we’ll get through thid together and you’ll be here every step of the way, you mean it?”

“Not you,” Graciela mumbled. “Leon he…when I saw him last week, he told me he loved me and he kissed me.” She felt Maric tense at her words. “That’s why I stopped talking to you because I didn’t know who I liked. But I’m picking you to be my boyfriend. Not him. He hasn’t promise me the same things you have.”

Maric looked lost in thought for a moment before pulling Graciela into a hug. “I’m sorry about that. Are you guys okay now?”

“Forget about him,” Grciela said. “I don’t want my whole world to be wrapped around whether or not Leon is going to come back. I want to live my life and be happy. As far as I’m concerned, if he can’t make time to see me it doesn’t matter. I can’t be friends with someone who makes no effort.”

“You guys were childhood friends. I know you care about him,” Maric said.

“I do care about him,” Graciela mumbled. “But I wonder if he cares too. Because to me it feels like I’m some kind of ideal he wants to secure when he gets back. Forget it, Maric. I’m not a prize to be won. Besides, if I’m being honest…he doesn’t make my heart beat quicken it’s pace like you do. This whole day has been perfect. Thank you.”

“It would be the perfect date if I kissed you, wouldn’t it?” Maric asked. “Can I do that?”

Graciela smiled and nodded. “I would like that very much.”

She felt Maric’s arms wrap around her and she felt his lips press against hers. It was different. Not rushed, but full of emotion and passion. She melted into his touch, allowing him to guide her. Finally pulling away, Maric grinned. “Not bad for my first kiss, huh?”

Graciela couldn’t help but laugh. “No, not bad at all.” 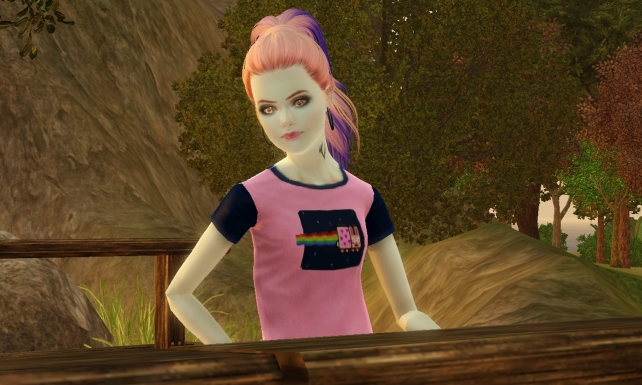 Instead of going home after her date, Graciela went for a walk. She was wary of heading back home because she didn’t want to explain the big smile that wouldn’t leave her face. She had a boyfriend now. Maric. The cute and chivalrous guy she met under the cherry blossom tree that day. He cared about her and how she felt. It was such a good day that Graciela had forgotten all about the darkness for a few hours. But now that the sun was down, it was out and ready to torment.

“He wants something from you, little lamb. They all do.”

“He doesn’t want anything,” Graciela muttered. “Maric isn’t like that.”

“They’re all like that. They want what you can offer. To them, it’s worth the price of dating us.”

“Dating ME.” Graciela corrected. “Maric is dating me.”

“No, little lamb. It will always be me and you. And the best part of this is that I don’t have to do a single thing, because I know you’ll mess this up on your own.”

“No,” Graciela cried angrily. “You’re wrong. I won’t mess this up. I’m happy and I won’t let you take that from me.”

“Say what you will, Graciela. But when his true intentions rears it’s ugly head, don’t say I didn’t warn you. Because how can someone that good not be a farse?” The darkness let out a pitied laugh and Graciela clutched her heart. No. It was wrong. This was different. Maric was different. She wouldn’t let things end badly between them.