Leon leaned over the counter of the coffee bar. If things had been different, this would have been him working with his friends. He’d be the one helping Braylen stock the shelves and complaining about annoying customers. He hated having responsibilities that he couldn’t talk about. He hated being so far away from everything he had ever known. Fortitude was his life and it was taken from him.

“Do you want a drink?” Callen asked, eyeing the boy who looked like he was ready to punch something. “A decaf perhaps?”

“I’m good,” Leon mumbled. “I should get going, actually. I have class tomorrow and I should really be studying now. I have this big exam and I just really need to study. Because if I fail…”

Callen was wiping the coffee machine behind the counter. He raised a brow but was positive that Leon couldn’t see it. “Now, don’t tell your mother I said this because Mya will kill me but take a break. It can’t be good locked up and studying all day.”

“No, you don’t understand. If I fail, everything is over for me. I…” Leon looked up helplessly. “I don’t even have a life here to return to.”

“Come on,” Callen said, placing the rag in the sink behind him. “Everyone is waiting for you here. Me and Braylen are here. Your parents are here. Graciela is here.”

“I know Braylen told you what happened at her party last night,” Leon said. He placed his head in his hands. “She probably hates me now.”

“Isn’t that what you wanted all along?” Callen asked, leaning over the table. He gave Leon a harsh stare.

Leon was taken aback for a moment. “No.Why would I want that?” Leon asked. “I love her. I want to spend the rest of my life with her.”
“See, I know that’s true. You adore Graciela above all else. It was clear the minute you two met that it was going to be something much larger than both of you. Your love, I mean.”

“She doesn’t love me,” Leon said bitterly. “She loves Maric.”
“Is that what you tell yourself to help you sleep at night?” Callen asked. “I know your game, because I’m playing it right now with Alistair.”

“Of course you are,” Callen said. “The Leon I know isn’t like this. He doesn’t show up to a party uninvited and dance with a girl who has a boyfriend. He doesn’t put his best friend in a predicament where she has to choose between two people who make her happy. He doesn’t kiss a girl to claim her.”

“I did all of those things,” Leon said, his gaze falling to the counter he was sitting at. “Maybe being away has changed me.”

“That’s where you’re wrong. I don’t care about my own heartbreak. I don’t care about what I feel. I only care about helping Graciela. You’re the selfish one who’s standing in the way of really loving Alistair. Because if we’re playing the same game, then you’re scared of opening up to him. You’re scared of laying your heart on the line because it may shatter who you are and what you’ve built up to protect yourself.”

Unflinching, Callen replied, “So the difference between me and you is that you’re putting Graciela’s feelings first? I’m not thinking of Alistair? I’m only thinking of myself and how broken I will feel if I reveal too much to him too soon? Because, Leon. We’re no different. You’re not selfless. You’re just as scared as I am.”

“Oh, it isn’t by choice? So you didn’t make a conscious decision to push Graciela into Maric’s arms? She could have been with you, the one we all thought would end up with her. She loves you, if that isn’t clear enough for you, Leon. You have always had her heart and you could have chose not to break it. There is always another way to go about things.”

“Not in this case,” Leon said sharply.  “You know all about legends. You know what I am and what she is. You know where we fall into this.”

“And you think that you can’t rewrite a legend?” Callen cut him off angrily. “A legend is just a story. A story that you have the power to change, above all else.”

“I can’t change what’s going to happen,” Leon said. “That’s why I have to push Graciela away.”

“You can change it,” Callen said. “If you just pulled her closer instead of pushing her away. Together, you and Graciela are special.”

“Even so,” Callen argued. “It’s not about the end. It’s about the journey. Imagine just how much sweeter that journey would be for the both of you if you had each other. If you can’t change it, then you enjoy each other, because maybe time isn’t something either of you have.”

“Even if it hurts,” Callen continued. “Even if you think that what you’re doing is protecting her…you’re not givbing her a choice. You decided thast Maric is the one for her. The one who will help her on this journey he doesn’t even know anything about.”

A voice echoed from the doorway. “Leon…what is he talking about?” Braylen asked, carrying a bag of coffee beans. “What did you do?”

“Go ahead, tell your best friend what you did,” Callen said, rubbing his temple. “I don’t know what I’m going to do with you boys.”

“What did you do?” Braylen repeated, eyeing his friend who looked like an angry heap of despair. “You can tell me anything.”

“I know that,” Leon mumbled. “I do. But I know you’re going to give me the same speech your dad just did about hurting Graciela. But I’ve already made up my mind. Neither of you can change that, because her thinking I’m some thirsty possessive immature jerk will save her the heartbreak she’s going to have to face later when everything collapses around her.”

“You’re an idiot,” Braylen said, anger dancing like a fire in his eyes. “Pax tells me that Graciela has been in her room crying all morning because of whatever it is you gave her at her party last night. And this is all because you want to protect her from heartbreak? She really needs you.”

“She has Maric,” Leon said. “I gave her the ring back. The one I proposed to her with when we were kids,” Leon said. “I didn’t have to say it for her to understand what I meant by it. It’s over between her and me. She chose Maric.”

“Because you have been acting like a possessive asshole!” Braylen crossed his arms over his chest. “I love you like a brother, but you made it so easy for her to jump into Maric’s arms.”

“That’s the point,” Callen cut in. “Leon is trying to make sure Graciela has someone to fall back onto. A support system who will love her, because he doesn’t think he can. Because of the legend.”

“My Watcher, Leon. Are you out of your mind? You made things worse, not better.” Braylen took in a deep breath so he wouldn’t lean over and shake his friend’s shoulders wildly. “But tell me one thing. When you kissed her and then when you danced with her, it was all an act to make her realize that Maric was better? I just don’t understand because she didn’t see it that way.”

“No. My love for Graciela isn’t an act. I just want her to know what it’d be like to date someone like me,” Leon said. “I won’t ever be there. I’ll be constantly fending off other guys and wanting all her attention to myself.”

“Except that’s not you,” Callen said. “So stop playing games. You’re your own worst enemy.”

“Maybe so,” Leon said. “But Graciela can’t ever find out about who I really am. Never. Just let me leave and Maric will pick up the pieces. He’s good for her. He can give her what I can’t. You know just as well as I do that he’s good for her…”

“He is good for her,” Braylen said. “Of course he is. That’s not up for debate. What’s up for debate is the fact that you made up Graciela’s mind for her. She’s going to resent you for the rest of her life when she finds out that you made a decision for her.”

“One day when she wakes up next to Maric and wonders what it would be like if it was you there next to her in bed, it will still be about her broken heart. Except in this scenario she’s unhappy because she feels unfulfilled,” Callen said. “It’s not a pretty feeling. Just look at me and Bray’s mom. The decision was made up for me, and I resent my people for it. You can’t have Graciela feel that way about you.” 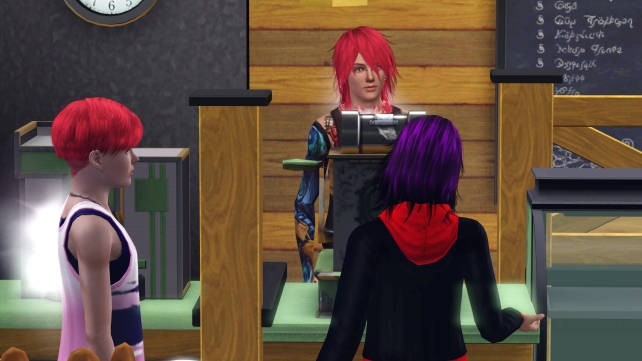 “You know that if push comes to shove she’d choose you over Maric,” Braylen said calmly. “I know that and you know that. A friendship with you is more important to her than a romantic relationship with Maric, even if she makes it seem like that isn’t the case. You were there for her from the very beginning, so why would she give up on you now? She won’t.”

“So what now?” Leon asked. “I’ve already put her in a terrible predicament. She said she felt electricity…” Leon mumbled, feeling the tears forming in his eyes. “She felt it when we were dancing. So I thought if I left she would just stop feeling it…”

“Leave!?” Braylen cried. “Damn it, Leon. Think about things before you do them next time. What should he do now, dad?”
“Definitely not leave,” Callen said. “Talk to her. Come clean. Let her think about her feelings. Let her take charge from here on out. The only way you two are going to end this darkness is together.”

Leon took in a deep breath before knocking on the door to Gracie’s house. He really couldn’t stay any longer. He had to get going. Because failure in his academy was not an option. He shuddered to think of the consequences his failure could bring. Right now, nothing was working for him.

Jeffrey pulled open the door with a wide smile, only to have it fall when he noticed the boy. “Leon?”

“I know I’m the last person you want to see and I know Graciela is very upset but I wanted to apologize,” Leon said. “Before I leave.”

“She isn’t home right now. I think she went to the park with Maric. She was crying.” Jeffrey frowned. “It wasn’t you. I promise you. It was Nerissa, and the news that she heard about her grandfather leaving has piled on a lot of stress for her.”

“Alistair is leaving?” Leon asked. “Does Callen know that?”

“I don’t think so,” Jeffrey said. “We just found out a few hours ago ourselves and Graciela overheard us talking. Alistair was trying to wait until things calmed down.”

“Oh, I’m sorry.” Graciela didn’t need someone else leaving her. So, Leon wouldn’t. “Can you give this letter to her then? I don’t want to interrupt her when she’s with Maric. But I did want to apologize to her. And, I wanted to tell her I was giving her our wedding ring back to hold for me until she sees me again.”

“Okay,” Jeff said. “I’m sorry things are working out like this. Gracie really loves you, Leon. You’re her everything. So don’t bail on her.”

Leon shook his head. “No. Never. Someone told me it’s all about the journey. So, I’m here for the entire ride.”