Note: Sorry about formatting, this new wordpress editor is taking some time to get used to!

Dionysus sat at the head of the table. He placed his metal fork down onto the glass dinner table and  clapped his hands together. “Jeff, this was delicious. Thanks so much for inviting me in to enjoy a family meal with you guys. It’s been awhile since I’ve done that.”

“We didn’t have much of a choice,” Jeffrey relied. “But I’d have invited you in anyway. It’s been awhile, even the kids are excited to see you.”

“Yep,” Camilla replied, drumming her fingers along the wooden edges of the table. “Very excited. So excited I can’t contain myself.” There was an edge to her voice. Dionysus knew that after all these years, a single dinner would not be enough for Camilla.

“I’ve missed you,” Dionysus assured the teen girl. “The only reason I told you to go with the Grays is because I knew they’d take care of you. You needed parental figures and I couldn’t be that for you. I still can’t.” The chatter at the table stopped as the two conversed. “Sorry everyone. I seem to always disappoint when I come back.”

“No you don’t,” Pax replied. His own plate was cleaned and he leaned back in his chair with a full stomach. “Camilla is just a bit angry because you left her without asking what she wanted. You gotta understand it’s not so easy for her to forgive you.”

Dionysus looked at the girl who sat glaring at him from directly across the table. “Camilla, if I let you choose you’d come with me and I can’t drag anyone else into the life I’m living right now. It wouldn’t be fair to you. I stand by that decision/ You can hate me forever but I did what was best for you. Besides…” He motioned to Pax and then to Graciela. “You have siblings, parents, a nice house and real food to eat every night. You remember what it was like not to have those things.”

“I love my family” Camilla said. “I wouldn’t trade the Grays in for anyone else, but I also really cared about you. I wanted to help you. I didn’t want you to be alone. I saw with my own eyes, every single time it seemed like you were finally going to find a family or a girlfriend or anyone to keep you company, the plans fell through. I wanted that to be different with us. We were going to be our own family against the world.” She frowned, but shook her head. He wouldn’t understand that she knew he needed her as much as she needed him.

“Can we all just agree that things turned out for the best and Dio is here now?” Graciela asked, poking her head up from her absentmindedly scratching her plate with a fork. “Are you leaving again, or are you staying in Fortitude?”

“I’m leaving,” Dionysus replied. “I was only passing through and I knew you guys would be here. I wanted to check up on you guys and see how you were doing.”

“Do you travel with anyone now?” Camilla asked. “Because if you’re still alone, I don’t understand why you won’t just stay with us. It’s been years. Your mission has to be done by now.”

“It won’t ever be done,” Dionysus said with a heavy sigh. “I’m a wanderer, I’m not supposed to settle down. I can’t. Enough about me, you guys really don’t have to worry about how lonely I am. I know when push comes to shove who’s going to be there for me.”

“It’s hard to be there when you’re so far,” Camilla muttered. “Can you at least stay for as little and help Gracie with the voice in her head? You’ve got to know something.”

“You’re still hearing the darkness?” Dionysus asked with a frown, turning to the vampire. “You haven’t found your light yet?”

“My light?” Graciela asked. “You mean there’s something that can vanquish this voice and the visions? How do I find my light?”

“You don’t find your light. It finds you,” He said. “Light is attracted to the darkness. It can’t exist without it. When the world was first created it was bathed in complete darkness. With no light in sight, people’s morale, their hopes, and their dreams grew dim. The creator realized that it was no way for his subjects to live and so he added light. That’s the day and night cycle we know of. But, the darkness grew angry as the people elished in the light. They were out and about in the day time, chatting excitedly and improving their lives. Meanwhile at night, their motivations lay dormant as they sleep.”

“I know this story,” Waverly said. The normally quite boy had finally piped up. “We’re learning it in school. The darkness tried to take over and then it returned everything to night time all the time, right? That’s why Fortitude used to have really long nights.”

“Exactly,” Dionysus replied. “So your supernatural school is teaching you something at least. Very good. Though, they seemed to have left out the part about how the darkness disappeared from the world and returned to its normal cycle.” Dionysus reached up to tighten his ponytail. This conversation was one he knew he’d have with the Gray family eventually but he was hoping it wouldn’t be with a branch he had adored so deeply. When Graciela had first shown signs of being in touch with the darkness he thought it may have just been a precursor to the curse her family was fated to endure. A vampire, he was almost sure, couldn’t or actually wouldn’t be afflicted by the gods. Though perhaps Elora really was incredibly angry that Lavina had tried to prevent her will the first time with her younger brother Timmy.

Whatever the case, the outcome for Graciela would be the same as Timothy Gray’s. As the table grew silent, all eyes turned to Dionysus for reassurance, help anything that could make their beloved Graciela’s pain go away. He couldn’t offer the smile they had wanted to see. “How much of the Gray family history do you know, Charlotte?” Dionysus clasped his hands together. 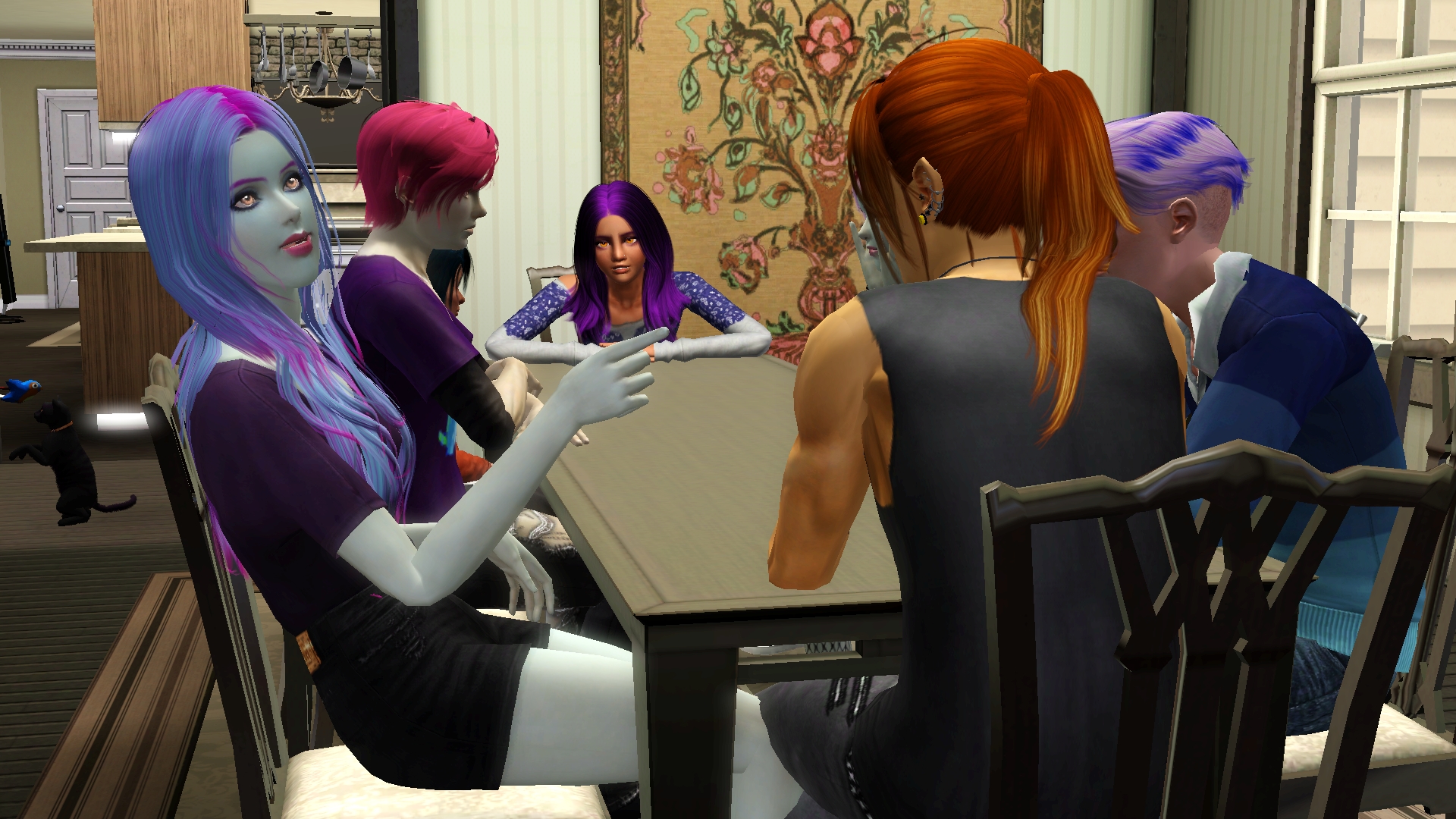 Charlotte tapped her chin as she tried to rack her brain as far back as she could remember. “We started as humans. Athena Gray was our founder and she lived in Lunar Lakes. She was a scientist and dabbled very lightly in time travel. Her lineage before that is murky, but I know she had a very elusive mother.”

“No, we need to go back farther in time. Your family did indeed start as humans yes, but they were well known vampire hunters,” Dionysus said. The room had gone rigid as he had said this. After all, the Grays were currently a supernatural family. Everything they had stood for now with both Charlotte’s and Alistair’s teachings- accepting all and not discriminating against race gender, occult status or anything else- had been rooted in a prejudiced ancestry. The Grays had not always been this welcoming.

“How can that be?” Charlotte asked quietly. “I knew we were not always vampires but…this is something I expected from my mother’s side, not my father’s.”

“It’s really a more complicated matter,” Dionysus said. “There was a great vampire war that left many human villages destroyed. The Grays thought they were helping their people. Some of that well intentioned justice was lost along the way and many members grew violent and intolerant. Some even cast their own out for mingling with the occult.”

“But,” Dionysus continued. “The ancestor that your family directly hails from, Lavina Gray, was one of the most noble members of your clan that I had known. She was misguided in her feelings just as others had been, but she was reconciling that. She had begun to welcome the vampires help with open arms to save her brother and that’s what led to the present we see right now.” He motioned to the people sitting at the table around him. “She had wanted one thing above all else and it was to save her brother from the imprint the darkness had left on him. But, you can’t defy fate. It’s almost impossible, you will always be punished.”

As Dionysus finished his speech, he felt the boulders piling on his heart. He knew what was happening right now to Graciela was partially, if not completely, his fault. He also meant what he had said. Defying fate was impossible, Graciela would need to fulfill her duty for not only her sake but for the world’s.

“I don’t understand,” Graciela muttered, looking down at the table. “What about her brother and his imprint? Please, you have to tell me everything you know.”

“Timothy did not hear a voice as you do but his skin began to burn when the sunlight touched it. He had to stay indoors and out of any direct natural lighting. He was only able to survive under fairly normal circumstances because of magic.” Dionysus shut his eyes. “You may be suffering the same physical fate without even realizing it. You’re a vampire and the sun already burns your skin.”

Graciela placed her head down onto the table and let out a strangled cry. “But what about the voice? What does your legend say about a voice?”

“Timothy’s sister was in contact with someone who heard a voice they claimed was from the underworld. You can check their diary. It would be in posession of the Sikes family. I believe the man’s name was Lapis.” As Dionysus said that Graciela looked up and then let out another cry, this time of frustration. “What’s wrong?”

“This is all just speculation and no definitive answer. I want a cure,” Graciela cried. “So, what am I suppsosed to do? Ask Leon’s parents for some book and then what? Find my light?” She shook her head. “It sounds like a load of crap.”

“Graciela,” Jeffrey warned his daughter. “Watch the way you speak to Dionysus. He can’t solve all of the problems we’re facing. He’s giving us more information that we didn’t have before and that’s a start. So, yes. We will speak to Myra and see what information she has about this man, Lapis. We can also ask your grandfather about the Gray family history.”

“Well how do we know these aren’t just stories?” Graciela challenged. “I’m supposed to just go into this whole thing blindly?”

“They’re not stories,” Dionysus said. “I’ve lived them. I knew Lavina personally and I was friends with her brother. Lavina was the one who told me about Lapis. I’m older than you can even imagine, and it’s not something I ever really talk about.” He leaned in closer so that he was eye level with Graciela’s sulking face. “But that’s all the information I can give you. Some things I’m not allowed to talk about. If you find the information out yourself, I can confirm or deny.” Dionysus winked at the realization on Graciela’s face and leaned back comfortably into his seat.