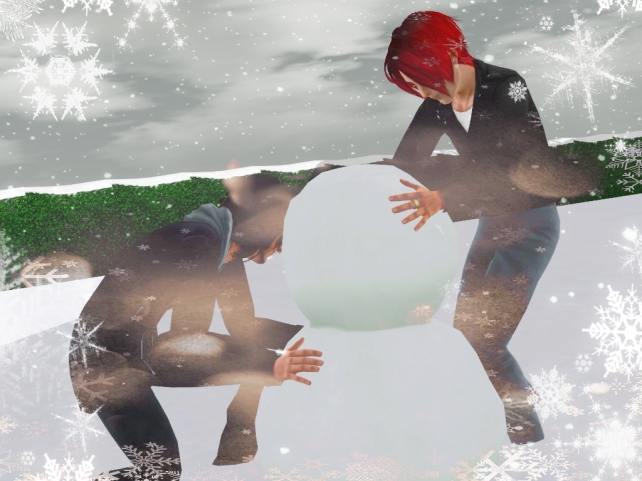 Alistair pulled his gloves onto his hands slowly. The longer he took, the longer Burke would stop waiting for him and start working on the snowman himself. It was becoming more and more painful to spend time with the man he had a son with. A son. After all these years. He could see the wrinkles decorating Burke’s face, a triumph for the merman and a curse for Alistair. He’d remain young while Burke aged. Again, he’d lose it all. Alistair hated himself for wishing he had another life. Hated himself for waking up next to the beautiful man and hoping it was the pink haired male who had ripped his heart to shreds. He hated himself daily for wanting something so disgusting when the best thing to have ever happened to him was in front of him. Burke saved him, and that wasn’t an understatement. With his daughters and grand kids gone, Alistair had only his father. It hurt, but he smiled. For Burke, his lover. His protector. His companion. The reason besides petty revenge, that he had for living. Surviving. But he was getting too old for this. Both of them were.

“Coming or what, babe?” Burke grinned, patting down the mound of snow he had already assembled.

“You should be doing this with Vice, he’d love the bonding time,” Alistair said. Vice was boisterous, like Burke. The two got along extremely well.

“It’s practice, for when he gets back from his friend’s house.” Things had stabilized enough for them to live almost normal lives. It didn’t stop Alistair from screening his son’s friends though. “I need your help.”

“I don’t want to,” Alistair said, but still trudged his feet through the cold powdery snow. “It’s cold.”

Grinning, Burke took his husband’s hands in his. “It’s snow, gorgeous. It’s freaking cold. Now hush up and grab some. We’re going to have the sexiest snowman on the block.”

Alistair knelt down and began to gather the cold snow in his gloved hands. Dread filled his gut. When he looked at Burke, he saw a man who loved him unconditionally, but Alistair hated himself. He hated what he had become, what he allowed himself to become. He hated his circumstances and he hated feeling the way he did. If his heart hadn’t hardened already, he’d be fighting back the tears. He wanted to love Burke, and on most days he did. He loved Vice. He loved playing house. But when it felt real, and when it felt like a game was hard to differentiate. Smiling to hide his inner turmoil, Alistair picked up a snowball and tossed it at the red head. “Hey, Alistair! Not the face!”

Burke tackled the brunette to the ground and kissed him. Alistair shut his eyes to take in the moment, trying desperately to focus on the man in front of him. This was his life.